The main trend wave of the AUD/JPY cross pair shifted the pair's price to the lower limit of the powerful potential reversal zone of the chart. Analysis of the last small-scale structure, dated November 27, indicates the incompleteness of this site. Given the width of the critical zone in the area of one and a half price figures, it can be assumed that the bullish mood of the movement will continue in the coming days. Within the next 24 hours, the most likely scenario for the movement of the pair will be a lateral flat with a descending vector.

The range of price fluctuations will be limited by the counter settlement zones. The return to the upward price course is expected at the end of the day or the next day. 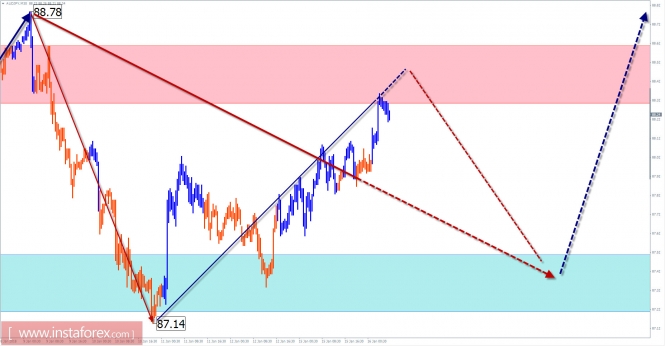 The price has dropped perfectly from our selling area yesterday before bouncing above our ascending support line. This ascending support line would need to be broken to trigger a strong bearish move down. We still remain bearish looking to sell below major resistance at 88.43 (61.8% Fibonacci retracement, Elliott wave corrective structure) for a drop towards 87.24 support (Fibonacci extension, horizontal swing low support).

RSI (34) sees major descending resistance line acting as resistance to push the price down from here.

Fundamental Analysis of AUD/JPY for January 19, 2018

AUD/JPY has been quite impulsive with the bullish gains recently. As a result, the price is currently holding at the edge of 89.00 resistance area from where the price is expected to show some bearish intervention. AUD has found suport from better than expected Employment Change report at 34.7 which was expected to be at 13.2k and from a slight change in the Unemployment Rate to 5.5% from the previous value of 5.4%.

On the other hand, Japan presented a series of downbeat economic reports this week, so that AUD has been more impulsive with the gains. Today, no economic report have been published in Japan and Australia but on Monday, the Bank of Japan is going to release Policy Rate report along with Monetary Policy Statement.

The Bank of Japan Press Conference is also due. These events are expected to help JPY to recover against AUD in the coming days. As for the current scenario, a counter move from JPY is expected against AUD which might lead to bearish pressure in the pair for the coming week.

Now let us look at the technical chart. The price is residing below the resistance area of 89.00 from where the price bounced off impulsively with some strong bearish pressure. Though the recent price action was bullish, the 89.00 area has been quite successful bringing the price down earlier. This is strong evidence that something similar could happen in this case. Besides, a pullback is expected to be shorter this time. As the price remains below 89.00 area, the bearish bias is expected to continue with a target towards the dynamic level of 20 EMA before pushing higher again in the future. 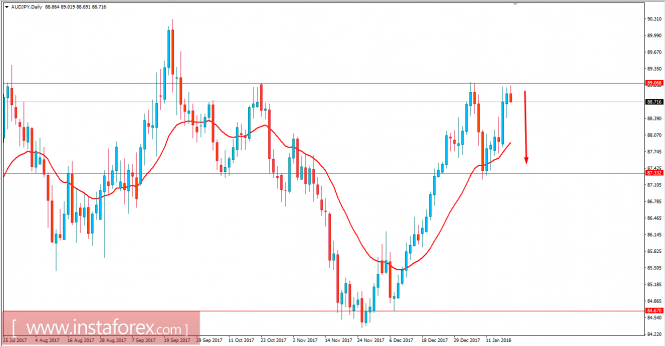 The price has dropped perfectly from our selling area and reached our profit target perfectly. We look to buy above major support at 88.37 (Fibonacci retracement, horizontal overlap support) for a bounce up to at least 89.01 resistance (Fibonacci extension, horizontal swing high resistance) once again.

The price has bounced perfectly from our buying level and reached our profit target once again. We prepare to sell from 89.18 major resistance (Fibonacci extension, above major swing high resistance) for a reaction off this level to push the price down to at least 88.68 support (Fibonacci retracement, horizontal overlap support).

Stochastic (34,5,3) is seeing major resistance at 98% where we expect a strong corresponding reaction from.

Stochastic (21,5,3) is seeing major resistance below 96% where a corresponding drop could occur.

Fundamental Analysis of AUDJPY for January 26, 2018

AUD/JPY has been quite impulsive with the bearish gains after bouncing off the 89.00 resistance area recently. AUD has been the dominant currency in the pair for a few months now, but recently, with better economic reports, JPY is showing good gains along the process.

Today, for the observance of Australia Day, no economic reports or events are taking place for which JPY had the full potential to dominate AUD, but failed to do so due to mixed economic reports. Today, JPY National Core CPI report was published unchanged at 0.9% as expected, Tokyo Core CPI report was published with a slight decrease to 0.7% which was expected to be unchanged at 0.8%, and SPPI report was also published unchanged at 0.8%. Moreover, Monetary Policy Meeting Minutes were neutral in nature having no short-term impactful policy decisions to effect the current market momentum.

Now let us look at the technical view. The price is residing at the edge of dynamic level of 20 EMA between the levels from 87.30 to 89.00. The current residing area of the price has proven to be an area of traffic in the earlier months and for the current scenario, a daily close below 87.30 is expected to open the doorway for further bearish move in the pair with target towards 84.50 area. 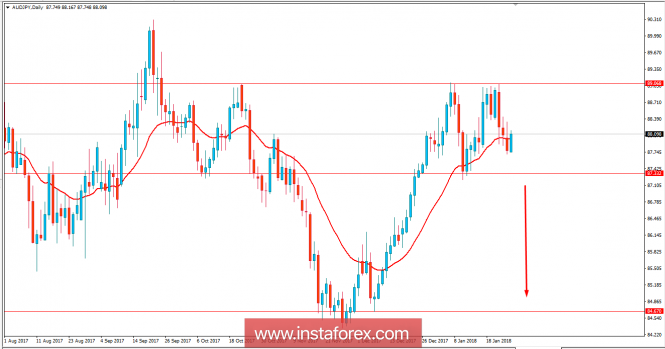 Fundamental analysis of AUD/JPY for February 9, 2018

Today the RBA Monetary Statement was released where the bank forecasted the GDP growth of 3% on an average, an increase in Inflation of 3% by December 2018, and the unemployment rate was forecasted to decrease rapidly in the coming months. Along with it, today the Australian Home Loans report was published with a deficit of -2.3% decreasing from the previous value of 1.6% which was expected to be at -1.1%. Despite having worse economic report on Home Loans, AUD has been quite strong today due to positive forecast from the RBA provided in the Monetary Policy Statement. As for the news from Japan, today the M2 Money Supply report was published with a decrease to 3.4% which was expected to be unchanged at 3.6%. It has already hich fueled gains on the AUD side. As of the current scenario, AUD is expected to rise further in the coming days to recover some of the grounds against JPY. Until JPY comes up with positive economic reports to sustain its gains, AUD is expected to push the price higher. 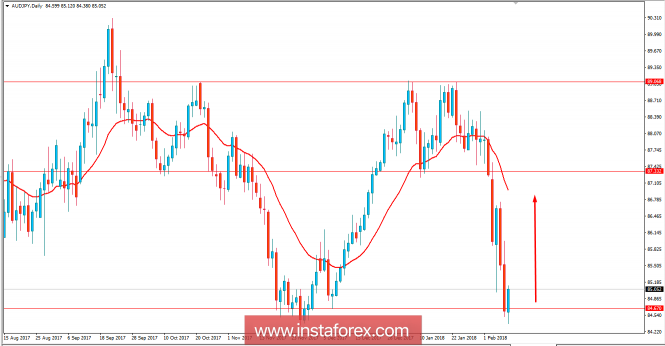 AUD/JPY is testing a strong support; prepare for a bounce

Stochastic (34,5,3) is seeing a strong support above 6.1% where a corresponding bounce could occur.

Fundamental Analysis of AUD/JPY for February 16, 2018

AUD/JPY is currently residing at the edge of 84.50 where the price is struggling to proceed lower under extremely volatile circumstances. AUD has been quite mixed amid recent economic reports which made the currency lose momentum against JPY.

However, JPY could not sustain the constant bearish pressure since it bounced off the 89.00 resistance area. Today, Reserve Bank of Australia's Governor Lowe spoke about the recent economic developments including a decrease in the Unemployment Rate while addressing the inflation issue which is running under 2% and minor growth of Household Income as expected.

The neutral statement from Governor Philip Lowe pushed the market into indecision whereas JPY amid recent mixed economic reports gained ground against AUD quite well. Recently, Japan's Revised Industrial Production report was published with an increase to 2.9% which was expected to be unchanged at 2.7% and Prelim GDP report showed a significant decrease to 0.1% from the previous value of 0.6% which was expected to be at 0.2%. So amid mixed economic reports, JPY has been the dominant currency in the pair while AUD is struggling with certain indecision and worse economic reports. To sum up, JPY is expected to gain further momentum in the pair until AUD comes up with a positive economic report or event to support its gains in the coming days.

Now let us look at the technical chart. The price is currently residing below 84.50 price area from where it is expected to proceed lower towards 82.00 support area. Certain correction can be observed along the way towards 82.00 support area. As the price remains below 85.50 which is the recent lower high, the price is expected to follow the bearish bias. 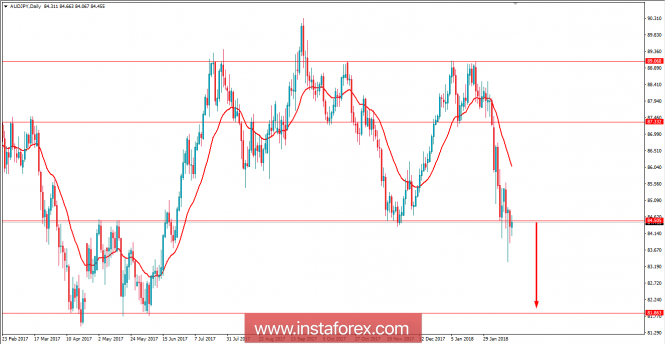