Fundamental Analysis of AUD/JPY for December 1, 2017

AUD/JPY has been quite corrective with the bullish gains after breaking below the 85.70 price area with a daily close recently. AUD has been quite positive with the economic reports recently which lead the price to gain over JPY but in a corrective manner. Recently AUD Private Capital Expenditure report was published at 1.0% which was expected to be unchanged at 1.1%, Building Approvals report was published with an increase to 0.9% from the previous value of 0.6% which was expected to decrease to -0.9% and Private Sector Credit was published as expected at 0.4% from the previous value of 0.3%.

Today AUD AIG Manufacturing Index report was published with an increase to 57.3 from the previous figure of 51.1 which did provide some push to the currency to gain over JPY but struggling to gain momentum. 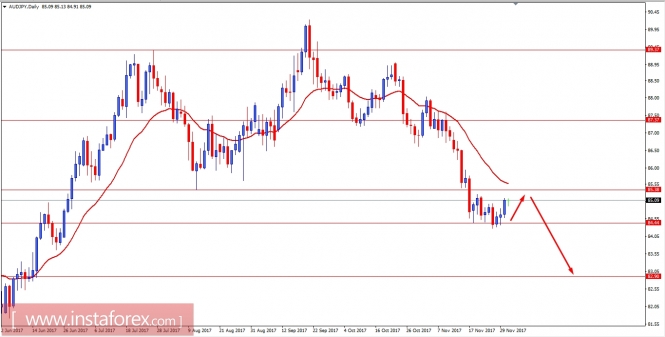 Overview of AUD / JPY with the forecast for the current day

On the daily scale of the cross-pair chart, the major trend of the price movement is set by an upward wave, which started in June last year. Having reached the lower boundary of the strong resistance zone by July, the price began to form a counter correction.

The last unfinished wave for today, creating a short-term price movement trend, is considered a downward segment from September 21. After the active phase of decline since in the middle of November, the conditions for an upcoming pullback were created.

Over the next day, the completion of an upward mood of the trend in the past days is expected. From the boundaries of the estimated resistance zone, further reversal and the beginning of the downward price trend are expected. Closer to the end of the day, a sharp increase in the volatility of the pair is possible. 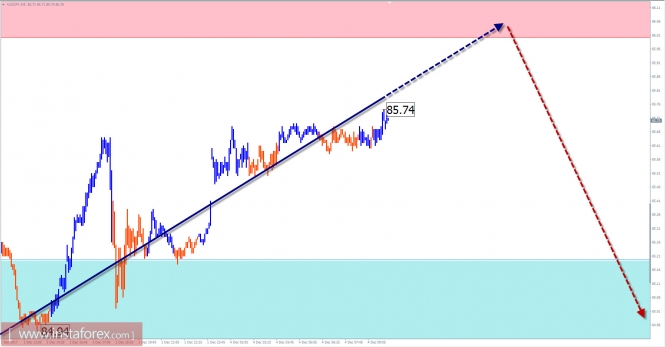 Overview of AUD / JPY with the forecast for the current day

On the daily chart scale of the cross currency Australian dollar against the Japanese yen since the end of June last year. The direction of the trend is set by the rising wave. By August, the price movement reached a zone of potential reversal on a large scale. Since then, the development of a counter wave design of a smaller size has been observed. It is not excluded that this could develop into a full-fledged correction in the end. The preliminary completion zone for the current decline is within the price figure below the current price level in the nearest potential turn area.

For the next day, a return to the downward course is expected after the end of the bullish retracement. Achieving the upper limit of the calculated completion zone is likely to happen in the upcoming days.

A downward course is expected to return the next day after the end of the bullish retracement. 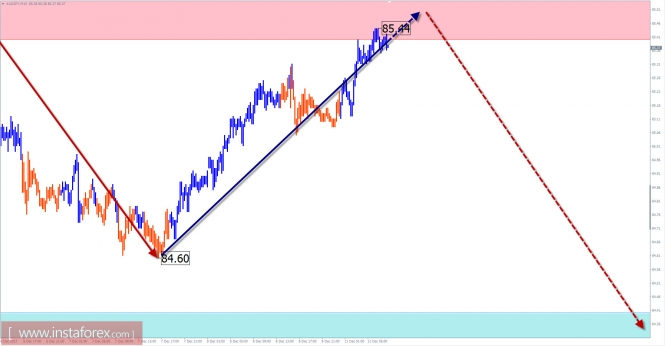 Fundamental Analysis of AUD/JPY for December 15, 2017

AUD has been dominating over JPY this week in light of upbeat high impact economic reports, supporting the gains. Recently, Australia's Employment Change report was published with a significant increase to 61.6k from the previous figure of 7.8k which was expected to increase to 18.1k and Unemployment Rate remained unchanged at 5.4% as expected. The positive economic report from Australia helped the currency to gain momentum, so the aussie has trimmed earlier losses against JPY. On the other hand, JPY has been showing a mixed dynamic amid economic reports released this week that resulted in weak bearish pressure in the pair.

AUD is expected to gain further against JPY in the short term quite well unless any high impact positive economic report from Japan injects some volatility and bearish pressure in the market.

Now let us look at the technical chart. The price is currently residing above the support area of 84.40 to 85.40 and dynamic level of 20 EMA after some correction and volatility inside the area. As the price remains above the support area, the bullish bias is expected to continue with target towards 87.40 resistance area. 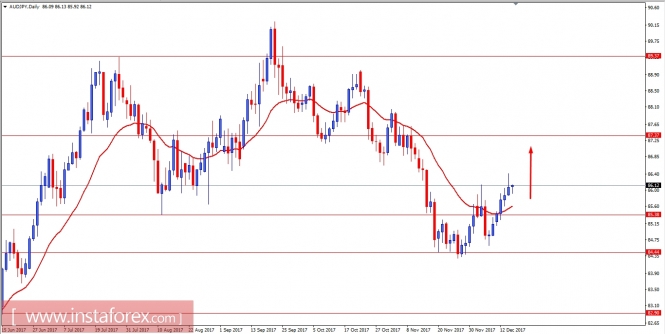 Fundamental Analysis of AUD/JPY for December 28, 2017

AUD/JPY has been very non-volatile with the bullish gains since it bounced off the 84.00 support area and breached above the 85.70 level. AUD has been quite positive with its gains all over the market since it published positive Employment Change report in the recent week which did help the currency to gain sustainable momentum without any pullback against JPY. The most interesting thing was having JPY no chance to create any counter in the recent days despite JPY having some of its best economic reports results.

Today in the morning, JPY had some gains over AUD which did look quite promising off the 88.00 price area after the positive economic reports were published including Prelim Industrial Production grew to 0.6% which was expected to be unchanged at 0.5% and Retail Sales which showed significant rise to 2.2% from the previous negative value of -0.2% which was expected to be at 1.1%. Additionally, today BOJ Core CPI report is yet to be published which is expected to be unchanged at 0.5%. Despite having positive economic reports already JPY failed to sustain the counter move in this pair whereas AUD is taking charge of the momentum already.

Now let us look at the technical view, price is currently residing inside the resistance area of 88.00 to 89.00 area where the price expected to have some corrections progressing higher. The non-volatile price structure that price has been maintaining so far do create some pre-breakout structure which hints about upcoming bullish breakout above 89.00 level in the coming days with target towards 90.50 area. As the price remains above 86.50 the impulsive bullish bias is expected to continue further. 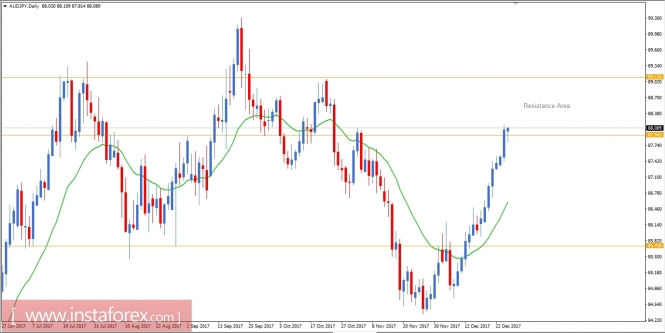 The 4-hour chart of the AUD/JPY cross currency pair shows the latest wave design from September 21.In this bearish wave from mid-November, the middle corrective part is actively forming.

At the time of analysis, the price reached the pre-completion zone, where there is a large scale resistance level.

The price must be worked out counter-rollback even with the option of further extending the wave. Today, we expect a more flattened mood of price fluctuations.

After an attempt to break down the resistance zone, a change in the motion vector and the course of the price downward are expected.

The last phase will most likely take place at the end of the day. It is possible that the time will be offset in the next trading day. 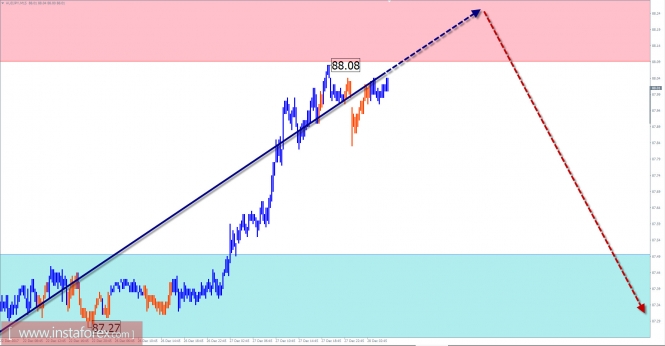 Review and Forecast for AUD / JPY

The direction of the main trend in the short term on the cross chart since June 2016 is set by a bull wave. The closest zone of the potential turn is the plot of the graph in the area of local high last September. After the autumn price correction from the beginning of December, the quotes began to form a wave in the dominant direction. At the present time, the lower boundary of the preliminary target zone has been reached. The internal structure of the ascending section of the graph has not yet been completed, which indicates that there is no correction formed from this level with the subsequent continuation of the upward wave formation. In the next sessions, an inter-sessional trend is expected to change.

The formation of the turn is most likely within the resistance zone while the lower boundary of the day course of the pair ranges in the support zone. 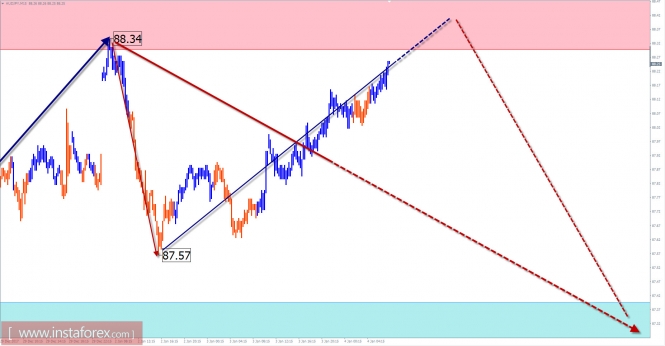 AUD/JPY setting up for a strong reversal, prepare to sell on break of support

Review and Forecast for AUD / JPY

The daily scale chart of the cross pair AUD/JPY indicates an upward rate, as the prevailing direction of the price movement. The last unfinished section was the bullish wave of November 27 last year. The structure is formed in the pattern of a classical impulse. Three days ago, the price reduction completes the previously started hidden correction of the incorrect form. The preliminary calculation indicates the support zone in the form of a correction target.

Today, the full completion of the current decline is expected. A short-term breakthrough of the lower boundary of the estimated support is not ruled out, but the probability of this is low. Toward the end of the day, the chance of changing the direction of the pair's movement sharply increases. The upper limit of the daily stroke of the instrument will limit the resistance zones.

RSI (34) is right on pullback resistance where we expect a corresponding drop.