Price is now testing a major level of resistance at 84.88 (Multiple fibonacci extensions) and we expect a strong reaction from here for a drop to at least 83.90 (Fibonacci retracement, horizontal pullback support).

Stochastic (34,5,3) is seeing strong resistance below 90% where we expect a drop from. 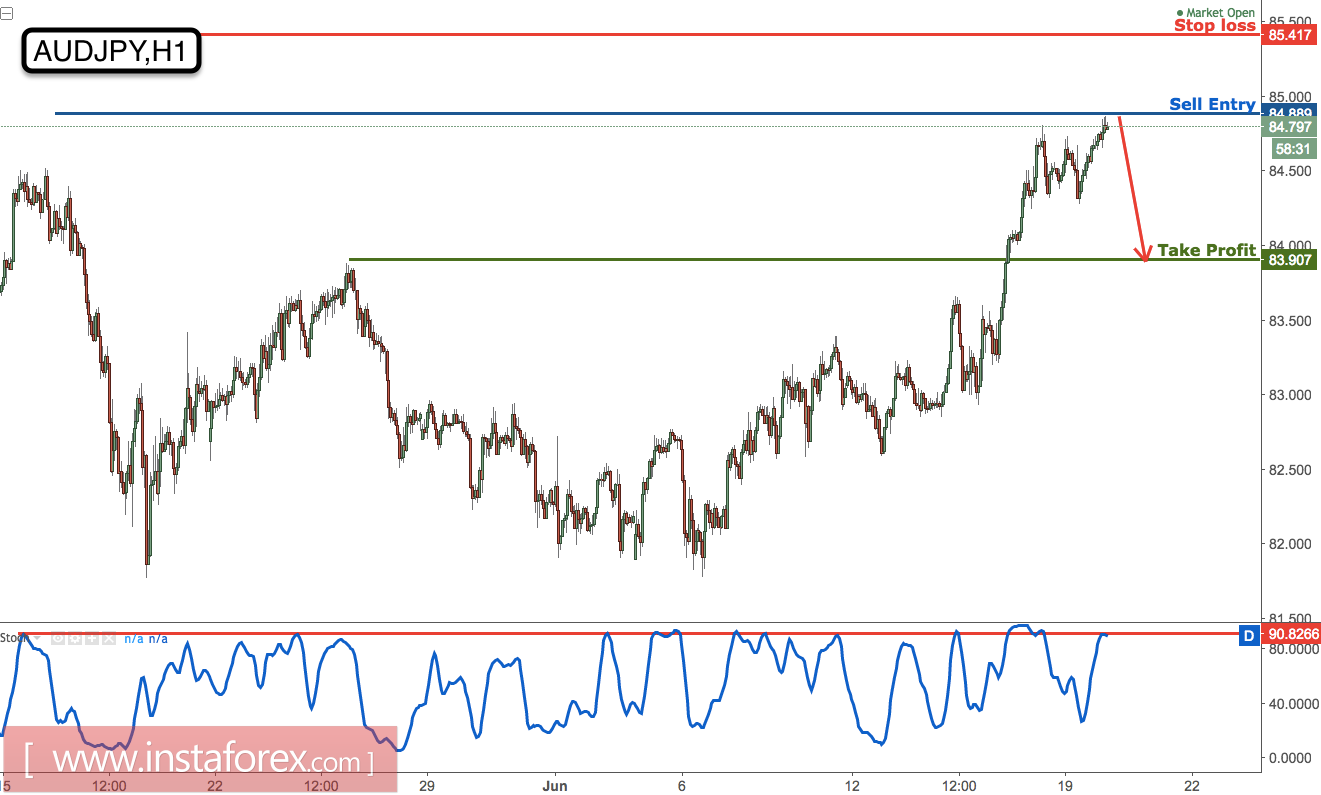 Stochastic (34,5,3) is seeing strong support above 7% which stochastic is fast approaching.


Has AUD/JPY formed a nice bullish reversal pattern? I think it looks all set to take off from here!

Stochastic (34,5,3) is seeing strong resistance below 98% and we expect a drop from this level.

Price has slowly crept up towards our selling area and we expect to see a drop on it soon. We remain bearish looking to sell below 86.97 resistance (Fibonacci extension, horizontal swing high resistance, Elliott wave theory, bearish divergence) for a drop down towards 85.74 support (Fibonacci retracement, horizontal swing low support).

Stochastic (34,5,3) is seeing strong resistance below 98% and we expect a drop below this level.

We can also see bearish divergence has been formed vs price which signals that a drop is impending.

The price is approaching major resistance at 88.26 (Fibonacci extension, Elliott wave theory) and we expect to see a reaction of this level for a drop to at least 87.27 support (Fibonacci retracement, horizontal pull back support).

Stochastic (34,5,3) has been testing out 98% resistance for quite some time and we expect a drop on it soon.

The price has reached our selling area and reacted off it perfectly. We remain bearish looking to sell on strength below major resistance at 88.26 (Fibonacci extension, Elliott wave theory) for a continued drop to at least 87.27 support (Fibonacci retracement, horizontal pullback support).

Stochastic (34,5,3) has started dropping from our 98% resistance nicely.

The price continues to test major resistance at 89.11 (Fibonacci extension, swing high resistance) and we expect to see a reaction off this level for a drop to at least 87.52 support (Fibonacci retracement, horizontal swing low support).

Stochastic (34,5,3) continues to test our 98% resistance where we expect a drop from.

The result of the annual price rise of the Australian dollar / Japanese yen cross was the price contact with a potential reversal zone. In its borders, there are several levels of resistance of different scale, including the largest one. Given the corrective nature of the rising wave and the completeness of the structure, its end can be expected in the coming weeks. The price decrease, which began last week, demonstrated a rather high potential. There is a great chance that this forms the first part of the reversal model. The swing stroke down design is close to exhaustion. Today, it is expected to form a reversal and the beginning of an upward price movement. The growth phase is more likely at the end of the day or tomorrow.

Boundaries of the resistance zone:

Boundaries of the support zone: 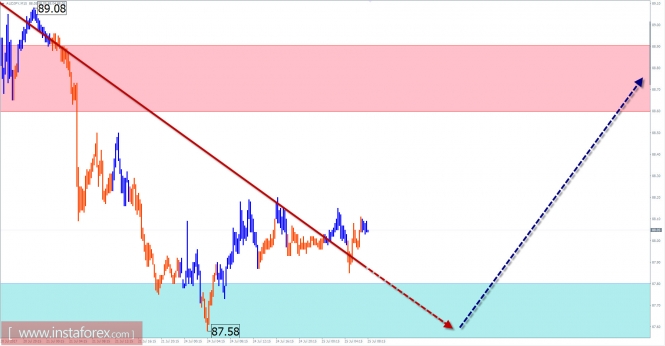 Explanations to the figures: For simplified wave analysis, a simple type of wave is used that combines 3 parts (A; B; C). Of such waves, all kinds of correction are composed and most of the impulses. On each considered time-frame the last, incomplete wave is analyzed. The zones marked on the graphs are indicated by the calculation areas in which the probability of a change in the direction of motion is significantly increased. Arrows indicate the wave counting according to the technique used by the author. The solid background of the arrows indicates the structure formed, the dotted line indicates the expected wave motion. Note: The wave algorithm does not take into account the duration of the tool movements in time. The forecast is not a trading signal! To conduct a transaction, you need to confirm the signals used by your trading systems.
You must log in or register to reply here.
Share:
Facebook Twitter Reddit Pinterest Tumblr WhatsApp Email Link