Price has bounced up perfectly from our buying area yesterday and is on track to reaching our profit target.

RSI (34) has bounced off nicely from our pullback support at 52% and has good upside potential for us to play the rise from here. 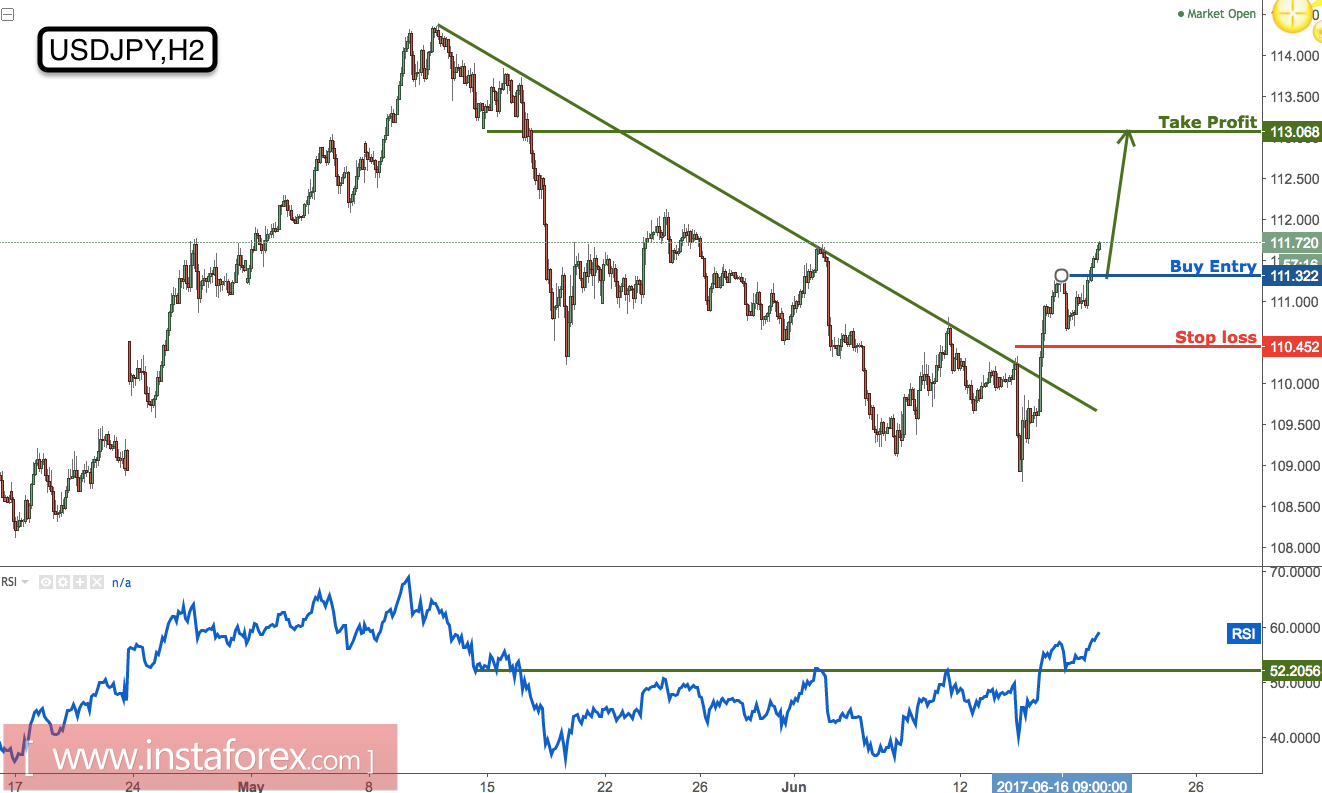 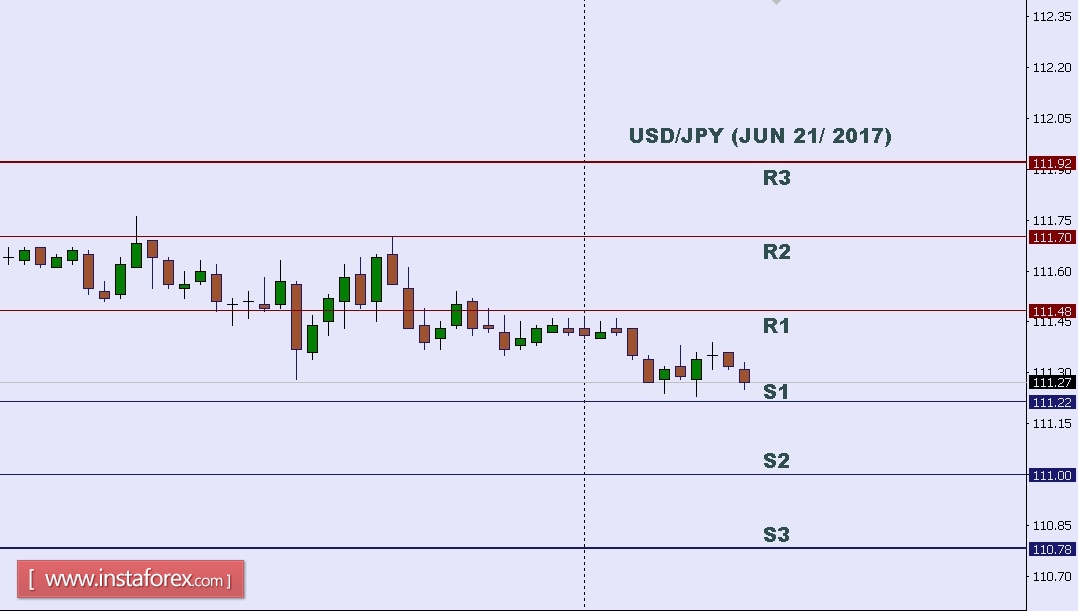 In Asia, Japan will release the All Industries Activity m/m, Monetary Policy Meeting Minutes data, and the US will release some Economic Data, such as Crude Oil Inventories, Existing Home Sales. So, there is a probability the USD/JPY will move with low to medium volatility during this day.

Despite the shallow pullback witnessed in this market, its short-term bullishness remains valid.

Price may endeavor to go further upwards before the well-anticipated bearish run happens in the market. 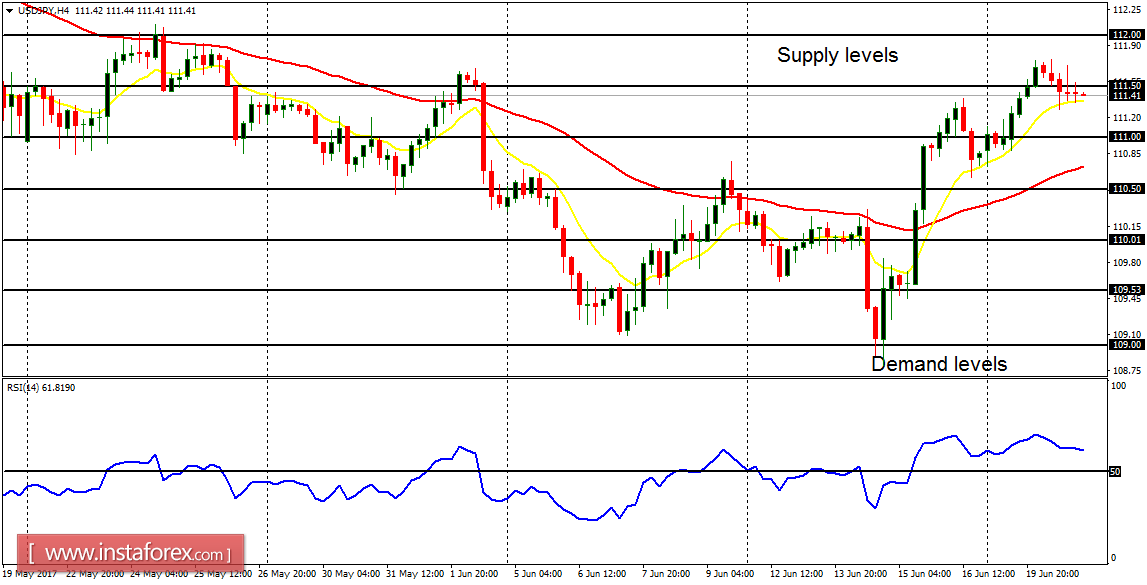 USD/JPY remains bullish for a further push up

The price has retraced to its entry level and looks set for another bounce for a further push up.

RSI (34) has bounced off nicely from our pullback support at 52% and has good upside potential for us to play the rise from here. 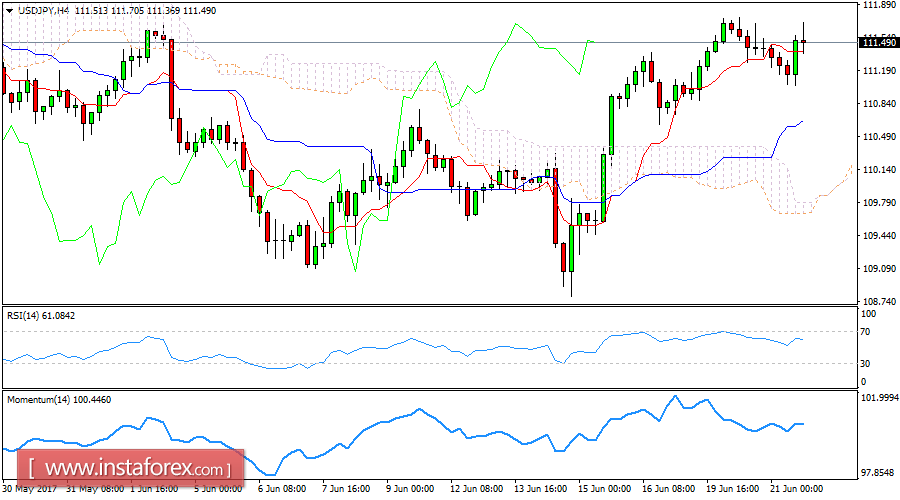 Stochastic is getting rid of its negativity clearly and approaching the oversold levels, which forms positive motive to push the price to resume the bullish trend.

Therefore, we will keep our bullish trend expectations active in the upcoming sessions unless breaking and holding below 110.65 levels. Our main awaited target at 113.97.

The expected trading range for today is between the 111.00 support and the 112.80 resistance.

Fundamental Analysis of USD/JPY for July 3, 2017

USD/JPY has shown bullish pressure after the recent JPY reports and historic defeat in an election in the capital Tokyo on Sunday.

To sum up, JPY had mixed economic reports today yet failed to gain against USD currently and as of most of the USD reports are expected to show a worse figure today, we might see some volatility in the market before the daily close.

Now let us look at the technical view, the price is currently above the dynamic level of 20 EMA after breaking above the important level of 110.20.

Currently, the price is expected to reach the resistance area of 114.40-115.00 in the coming days. As the price remains above the 20 EMA, a bullish bias is expected to continue further in this pair. 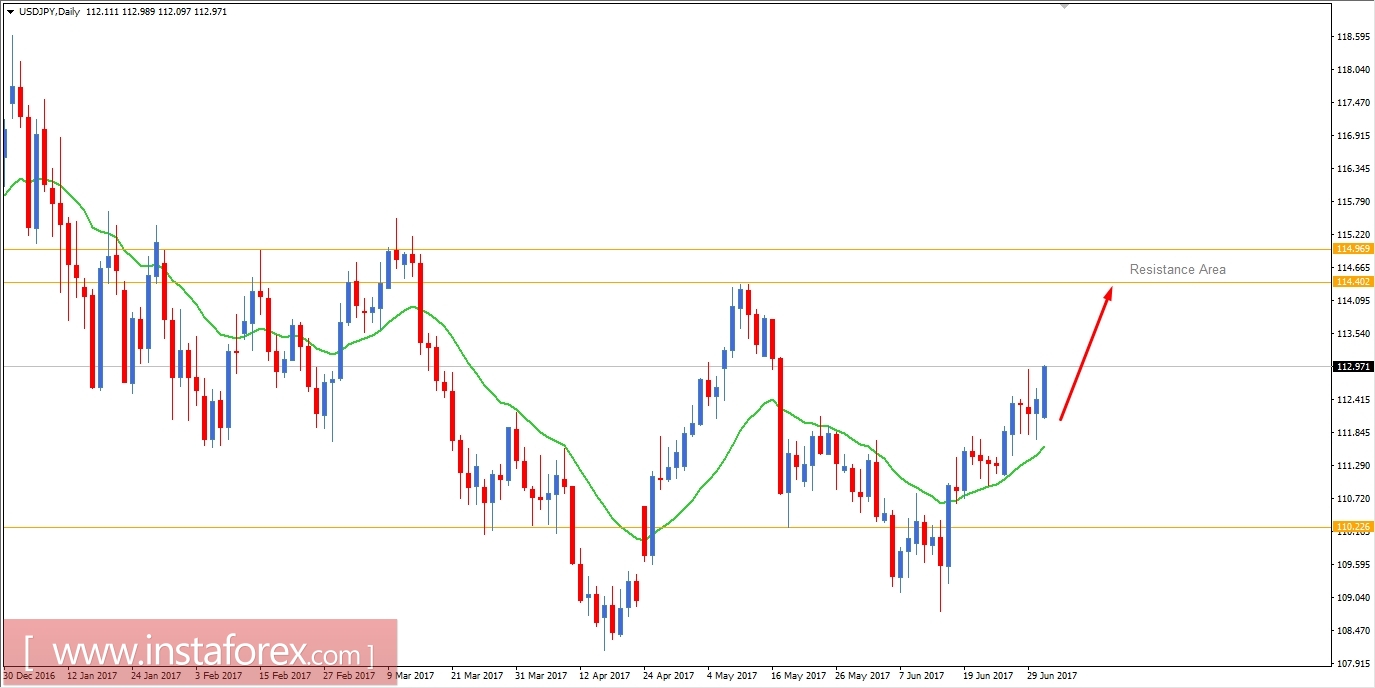 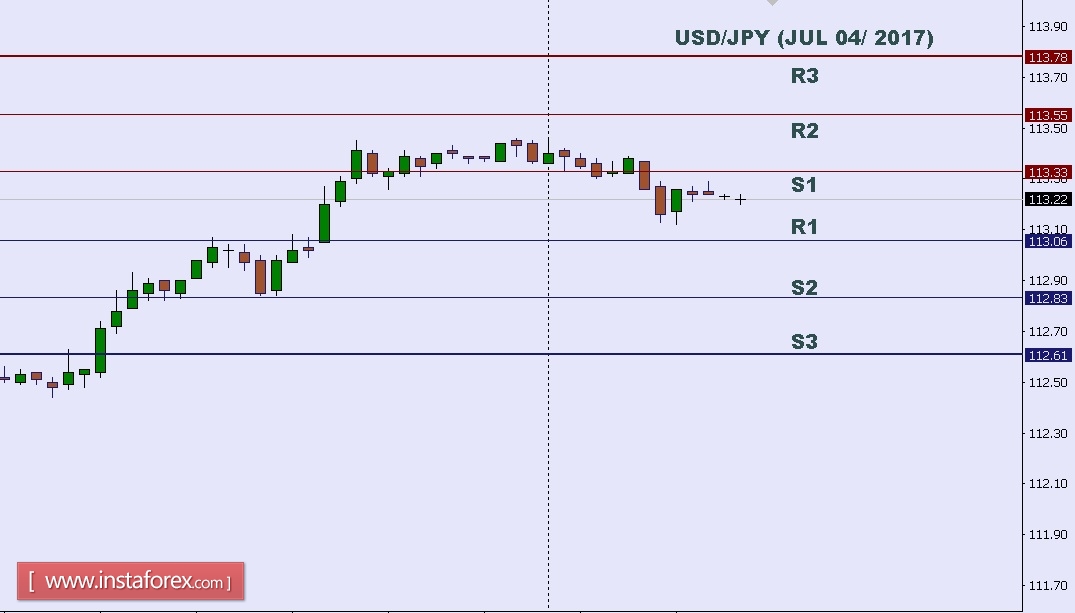 In Asia, Japan will release the BOJ Core CPI y/y, 10-y Bond Auction, and Monetary Base y/y data, and today the US will not release any Economic Data.

So, there is a probability the USD/JPY will move with low to medium volatility during this day.

The USD/JPY made further bullish movement on Monday, but it is now engaged in a shallow bearish correction, which may turn out to be another good opportunity to go for a short-term bullish signal.

There is a Bullish Confirmation Pattern in the 4-hour chart, and a further bullish movement is a possibility (although the outlook on JPY pairs is bearish for this month). 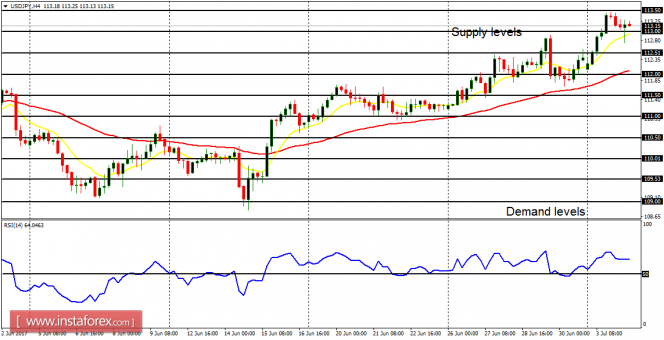 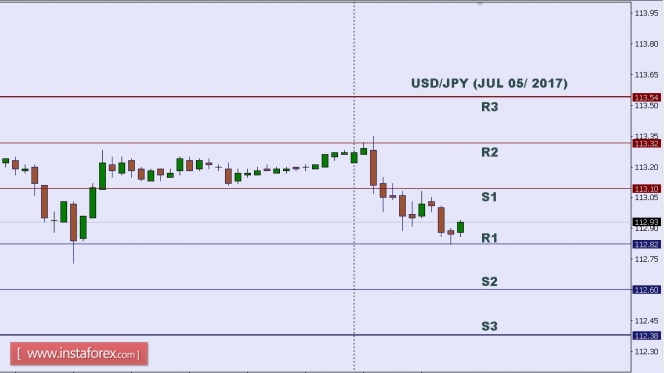 In Asia, Japan today will not release any Economic Data, but the US will release some Economic Data, such as IBD/TIPP Economic Optimism and Factory Orders m/m. So, there is a probability the USD/JPY will move with low to medium volatility during this day. 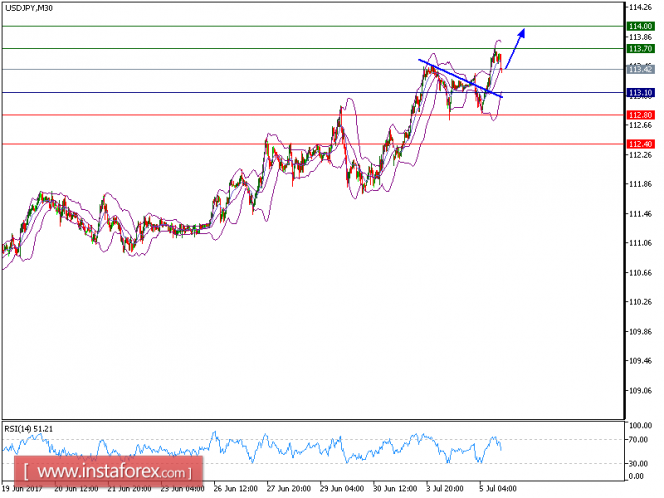 Our upside target of USD/JPY has been hit. USD/JPT is expected to trade with a bullish bias above 113.10.

Although the pair posted a pullback, a support base at 112.80 has formed and has allowed for a temporary stabilization.

Even though a continuation of consolidation cannot be ruled out, its extent should be limited.

Alternatively, if the price moves in the opposite direction as predicted, a short position is recommended below 113.10 with a target at 112.80. Chart Explanation: The black line shows the pivot point.

The red lines show the support levels and the green line indicates the resistance level. These levels can be used to enter and exit trades.

GOLD AND USDX : Daily Signal And Analysis From InstaForex
82 83 84