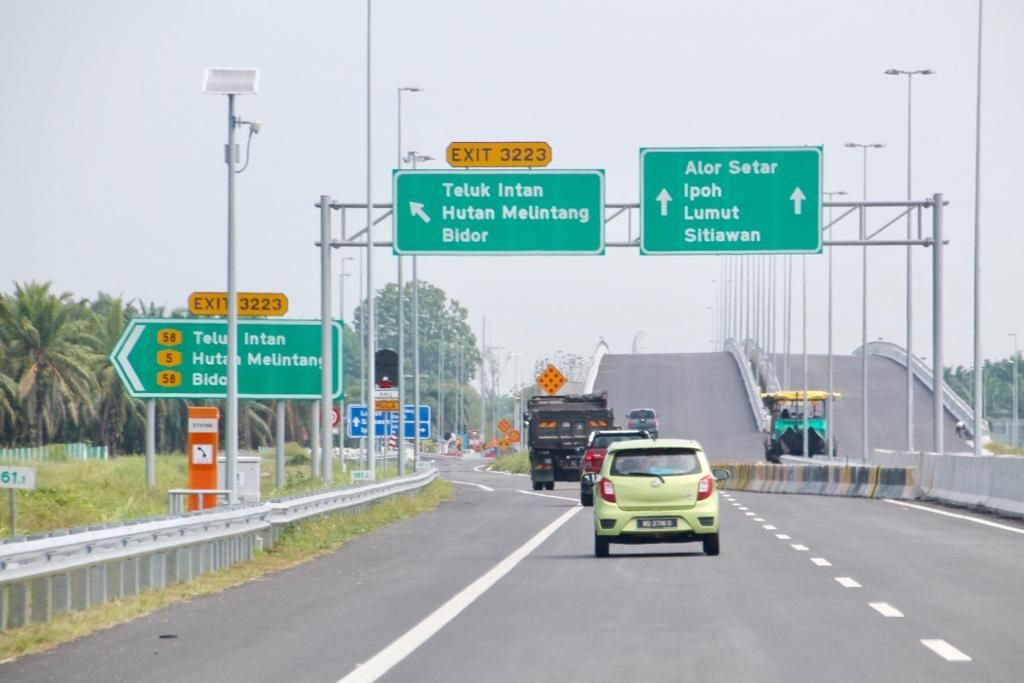 AMIDST all the hoopla surrounding the possible buyout of PLUS Malaysia Bhd, the other long stretching highway in Peninsular Malaysia has been making some notable progress.

While West Coast Expressway Holdings Bhd (WCE) has been perceived as having faced numerous delays and challenges with its land acquisitions, its CEO Datuk Neoh Soon Hiong says the company is in high gear to complete the 233km expressway connecting Banting in Selangor to Taiping in Perak.


“The worst is over for us. The land acquisitions are about 95% completed and we have commenced construction works for Sections 7 and 11 – the last two sections, which is estimated to be completed by 2022, ” Neoh tells StarBizWeek.

To recap, WCE is a greenfield highway project with its 50-year concession agreement signed with the government in January 2013.

It runs parallel to PLUS’ North South Expressway (NSE), and is expected to offload some of the traffic from the NSE as well as provide connectivity to towns along the west coast.

Construction of the expressway commenced in 2014 and was initially slated for completion in 2019.

However, there were delays stemming from land acquisition proceedings and route realignment plans by the previous government.

WCE has just completed the second tranche of a rights issue that saw it raise a total of RM481.31mil. 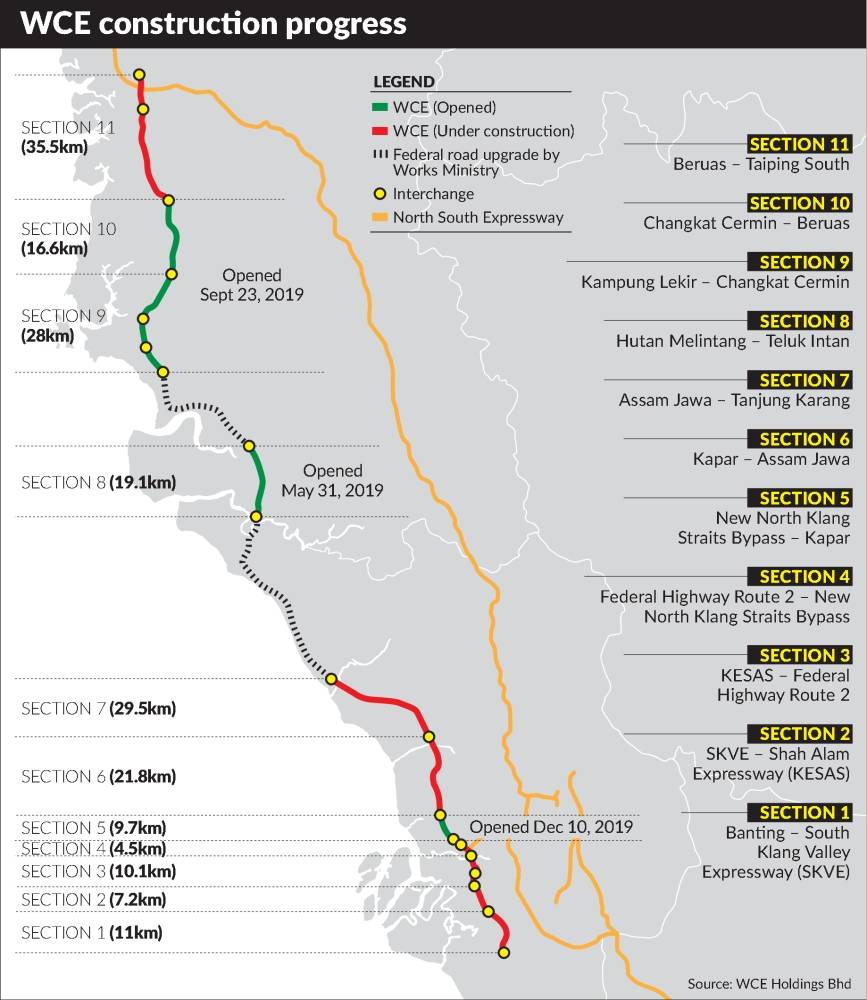 Neoh says that the funds raised from the rights issue, coupled with funds from the earlier government support loan (RM2.24bil), its syndicated term loan (RM1.5bil) and sukuk (RM1bil), in turn, puts WCE in a good position to complete construction of the highway.

Notably, there has been an increase in the project cost for WCE by RM750mil to RM6.69bil largely due to higher estimated land acquisition costs.

However, WCE chief financial officer Lyndon Alfred Felix explains that the company has embarked on wide-reaching project cost savings on actual construction costs. In addition, there have been renegotiations in court for the land acquisition compensations. All of these, he says, will offset the total cost overrun.

As a result, it is highly unlikely for WCE to have another cash call in the near future.

“We are able to bridge the gap in land acquisition cost overrun through recourse from legal cases – the cases completed so far have been successful, ” says Lyndon.

To recap, late last year, WCE completed its rights issue that entailed the offer of 2.005 billion new redeemable convertible preference shares (RCPS) at an issue price of 24 sen per RCPS, together with 501.368 million free warrants, on the basis of two RCPS for every one WCE share held on Oct 24, with one free warrant for every four RCPS subscribed for.

As for toll collections for the WCE highway, which are stipulated in the concession agreement, Neoh says the WCE has submitted documents seeking approval from the government to commence toll collection.

“We expect to receive approval soon.

“Toll collection shall commence with three sections that are already operational, ” says Neoh.

However, some sceptics reckon that the government may not approve the toll collections on WCE so soon, considering that this is a contention issue.

But assuming WCE receives the approval to collect toll charges following the rates stipulated in their concession agreement, another question is, will there be sufficient users? This is also considering that the parallel NSE is likely to see a reduction in toll charges soon.

WCE’s management reckon that their highway has compelling reasons why some users would opt for it.

For one, the WCE highway boasts more interchanges than other highways in Malaysia.

“We have provided 21 interchanges over the 233km stretch – that’s almost one interchange at every 10km. Highways are a catalyst for development, but it is a chicken and egg situation. If there isn’t a big enough development, highway owners are not compelled to connect to towns that are deemed too small.

Secondly, note that there are two stretches on the WCE that are federal roads managed by the Works Ministry (JKR).

Thirdly, the four sections of the WCE opened so far have seen traffic volumes which are “more promising than expected”, says Neoh.

As the WCE has yet to be connected to the NSE, there is low heavy vehicle volume.

However, once the WCE is fully completed and is connected to the NSE, Neoh expects a higher volume of heavy vehicles.

This is due to the fact that the WCE is built on flat coastal land, which results in lower fuel consumption for heavy vehicles, Neoh explains.

Apart from that, the WCE would be a preferred expressway for heavy vehicles as it connects Port Klang and Lumut Port, he adds.

But that’s not all. If feasible, Neoh says the WCE alignment may even extend all the way to Penang, to make it a total port-to-port connection on the west coast.

Additionally, the group has the first right of refusal to develop Section 12 of the WCE, which runs from Siputeh to Segari in Perak that stretches 41km, with a construction cost of RM600mil.

Beyond the construction of the highway, WCE has lined out plans that provide the group with recurring income streams, which will keep the group busy throughout the concession period.

Apart from operating and maintaining (O&M) the expressway, the group will also own and operate the rest and service areas (RSAs) along the WCE.

To date, 12 locations with a land size of 10 acres have been identified as RSAs, where each location will house two petrol stations, making a total of 24 petrol stations.

Both segments, the O&M as well as the development and management of the RSAs, will be carried out on a joint venture basis with government-linked companies or respective state governments.

“We have since called for a tender for a petrol station in Sitiawan and we estimate the petrol station to be up and running a year from now, followed by Teluk Intan, ” says Neoh.

On whether WCE could be a target of the government’s plan to buy back highways, Neoh says that it is unlikely. This is given that the government seems to be focusing on completed highways, but nevertheless, there are sufficient clauses in the concession agreement that protects WCE if a situation for a takeover arises.

AMIDST all the hoopla surrounding the possible buyout of PLUS Malaysia Bhd, the other long stretching highway in Peninsular Malaysia has been making some notable progress.