The price is testing major resistance at 0.7833 (2 years high, Fibonacci extension) and we expect a reaction off this level to at least 0.7769 support (Fibonacci retracement, Elliott wave theory). We would require the price to break this level first before we can confirm any further drop.

Stochastic (34,5,3) is testing 96% resistance and we expect it to drop soon along with the price.

Good news came from China as the economy expanded faster than anticipated. The National Bureau of Statistics revealed, that the second quarter Chinese GDP grew by 1.7%q/q, up from 1.3% printed a quarter earlier. The world's biggest emerging market's growth improved to 6.9% on a yearly basis. The retail sales rose by 11.0% year-on-year in June, the industrial production unexpectedly expanded by 7.6%y/y in the same month from 6.5% a month earlier.

Over the past four quarters, the Chinese economy has relied on government spending and access to cheap credit provided by the Bank of China in order to fuel a faster than expected economic expansion.

At the same time, efforts to stop a red hot housing market did not bring any substantial results, because of the strong demand. Buyers anticipating further restrictions on housing have flooded the market after authorities introduced limits back in March. Nevertheless, the NBS expects property investment growth to stabilize over the time

In the other note from SBS, we can read, that: "Prudent and neutral monetary policy will provide necessary liquidity in the economy, but also prevent a rise in debt levels". The economy continues steady, improving momentum in the first half of 2017 and the economic growth lays a solid foundation for achieving the full-year GDP target despite international uncertainties and domestic structural problems.

Let's now take a look at the AUD/USD technical picture on the daily time frame.

The Australian Dollar is strongly connected to the Chinese economy, as most of the commodities are being exported from there. The AUD/USD pair soared to 0.7836, the highest level in more than a year as carry traders are in charge of the market. The daily relative strength index is entering the overbought territory, indicating that a short-term correction could be underway. Yet, the downside potential appears to be limited.

The Australian dollar, which is rising ahead of the total market since the beginning of the summer, seems it is no longer threatened. Uncertainty over the euro and the pound reached a very confusing phase, oil and iron ore are rising for the third consecutive day (iron ore $65.17 per tonne), coking coal ads 1.1%.

Today, excellent macroeconomic news came from China. GDP for the second quarter remained at the same level, 6.9% y/y against expectations of a decline to 6.8% y/y, quarterly growth was 1.7% against the 1.3% in the previous period.

Tomorrow the minutes of the last meeting of the RBA will be published. It is possible that central bank will follow the example of the European Central Bank (and especially the Bank of Canada, which raised its rate last week) and give a hint of tightening policy in the medium term, even if it does not have it in mind.

The main obstacle for a rate hike is the extremely high crediting of the population with mortgage loans- more than $1 trillion with an annual increase of $2.4 billion. 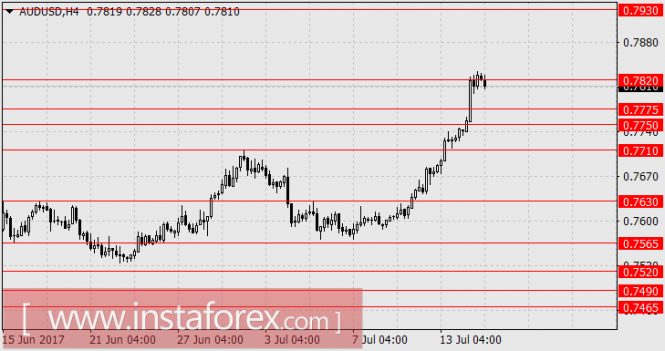 The price has dropped absolutely perfectly from our selling area as expected and is fast approaching our profit target. We remain bearish looking to sell below 0.7802 resistance (Fibonacci retracement, horizontal pullback resistance) for a further drop to at least 0.7741 support (Fibonacci retracement, horizontal pullback support).

Stochastic (34,5,3) is dropping nicely from our 96% resistance as expected.

The Reserve Bank of Australia Meeting Minutes indicated a positive attitude towards the second quarter GDP growth. The Gross Domestic Product (GDP) expanded 0.3% in the March quarter, but the data for June quarter "was generally positive" amid rebounding consumption growth.

Nevertheless, RBA pointed out growing divergences in the domestic economy, especially in consumption, as it still remains generally subdued given the record level of household debt bearing down on consumers. The RBA policymakers voted to keep the interest rate unchanged at the level of 1.5% at the June meeting, which is 11th month of no changes in monetary policy.

The timing of the next interest rate hike remains unknown and there is a little clue from the policymakers about whether the interest rate hike could happen. The only economic signs of a possible hike in the nearest future are surging prices of houses and record debt levels. The RBA's next meeting is scheduled for August 1st and still, no change in policy is expected.

The RBA policymakers voted to keep the interest rate unchanged at the level of 1.5% at the June meeting, which is 11th month of no changes in monetary policy.

The timing of the next interest rate hike remains unknown and there is a little clue from the policymakers about whether the interest rate hike could happen. The only economic signs of a possible hike in the nearest future are surging prices of houses and record debt levels. The RBA's next meeting is scheduled for August 1st and still, no change in policy is expected.

The relative strength index advanced to 78%, warning that AUD/USD may have been overbought in large quantities in a very short period of time. Price pullbacks are expected to meet dip-buyers as the next technical support is seen at the level of 0.7832.

From the beginning of last year, a large scale of the price chart of the Australian dollar demonstrates the formation of the corrective geometric figure "ascending triangle". Wave analysis indicates the completeness of the model structure. The final part of the wave this year formed a distinct zigzag. The last segment of May 9 has a pronounced impulse appearance. The price has come very close to the lower boundary of the preliminary settlement zone, where the probability of completion of the entire correction is strongest.

Today, the most realistic scenario will be the correction of yesterday's recovery. The resistance zone is expected to turn and lower the price, down to the support zone. The nature of the oscillations is likely to be flat. 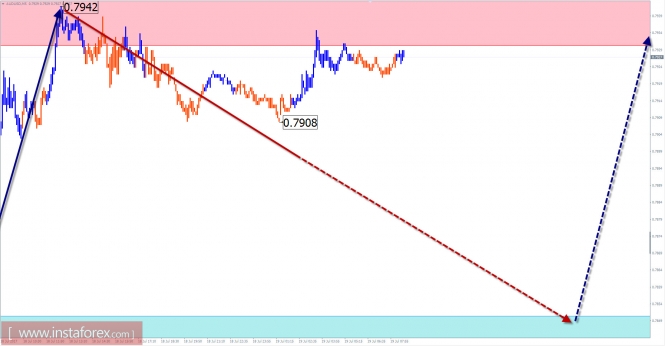 The dovish comments from Deputy Governor of the Reserve Bank of Australia (RBA) Guy Debelle had an impact on the Australian Dollar. Debelle urged the markets not to read too much into the board's discussion on the neutral rate. He said that "no significance should be read into the fact the neutral rate was discussed at this particular meeting" and "most meetings, the board allocates some time to discussing a policy-relevant issue in more detail, and on this occasion, it was the neutral rate". He also emphasized that "other central banks increase their policy rates does not automatically mean that the policy rate here needs to increase". At the end he added, that the rising Australian Dollar is complicating the economy's adjustment, so appreciation of AUD is not welcome, despite the fact, that recent data has given the RBA a little more confidence in the economy.

The recent economic data from Australia was better than expected. The unemployment rate is low, full-time employment is increasing, wages are on the rice together with the inflationary pressures which are way above the RBA projections. In this situation, a further improvement of the economic conditions may encourage the Reserve Bank of Australia to change the course of monetary policy, so it might start to signal a willingness to increase the interest rate sooner than global investors expect. This will in return cause an appreciation of the Australian Dollar across the board, however, this is not that much welcome according to Debelle.

Let's now take a look at the AUD/USD technical picture after the news release. Debelle's comments initiated a pullback from the recent highs at the level of 0.7988 and it looks like the market wants to test the technical support at the level of 0.7838. The overbought market conditions and clear bearish divergence support this view.

Yesterday, employment data in Australia came out weaker than forecast. The May unemployment rate was revised down to 5.5% from 5.6% while the June figure remained at the same rate of 5.6%. This actually means that there is an increase in unemployment. Participation in the workforce increased from 64.9% to 65.0%. The number of new jobs created was at 14,000 against the forecast of 15,000 and the May results of 38,000. The May figure lowered from 42,000. The good news was that the index of business confidence in NAB for the second quarter formally increased from 6 to 7. The formality here is that the indicator for the first quarter was revised to increase from 6 points. On mixed data, the Australian dollar closed the day with symbolic increase.

This morning, the Deputy Reserve Bank of Australia Chairman, Guy Debelle, said that amid the residual effects of the financial crisis, weak investment, low inflation, and low salary growth, the RBA will continue to hold a soft monetary policy. Against the background of Mario Draghi's speech yesterday that sounded dissonant, the Australian dollar lost 70 points in the morning session. But even in Australia, everything is not so bad: the trade balance had a positive and high balance for the last seven months (the last positive balance in four months was in late 2013 - early 2014), industrial production is very weak (declining overall in 2016), retail sales have growing for the last three months, and consumer spending has risen significantly since 2009 (although there is a problem of crediting). Meanwhile, steel production (432,000 tons per month) is on high volumes since spring of last year.

Well, Guy Debelle felt the market qualitatively and it became clear that he was weak. We are waiting for the AUD/USD in the range of 0.7750/75. 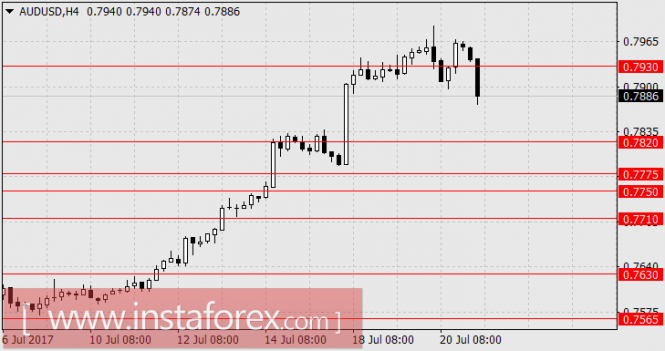 After a non-volatile bullish trend after breaking above the 0.7750-0.7830 resistance area, AUD/USD has shown some indecision yesterday. Yesterday AUD/USD Employment Change report was published with a decreased figure at 14.0k from the previous value of 38.0k which was expected to be at 14.4k, Unemployment Rate was unchanged at 5.6% as expected and NAB Quarterly Business Confidence report was also unchanged at 7.

Due to these economic reports, AUD could not sustain the bullish bias in the market and lead to indecision with a daily close. Today RBA Assist Gov. Debelle and Bullock is going to speak about nation's key interest rates and future policy shifts which are expected to be quite hawkish today. On the USD side, yesterday Unemployment Claims showed a better than expected figure at 233k from the previous value of 248k which was expected to be at 245k and Philly Fed Manufacturing Index report showed decrease figure at 19.5 from the previous value of 27.6 which was expected to be at 23.4.

Today we do not have any economic events on the USD side. To sum up, due to mixed economic reports recently on both sides AUDUSD is currently residing in an indecision situation which is expected to continue for short and medium-term period. As USD has been showing some positive report recently there is a higher chance of USD dominating AUD in the coming days.

Now let us look at the technical view, the price is currently showing some bearish evidence in the market after an indecision daily candle of yesterday. As the dynamic level, 20 EMA is quite away from the current price a mean reversion to the dynamic level is expected in the market which may lead the price to be bearish towards 0.7830-50 area before proceeding further upwards with the trend. As the price remains above the support area of 0.7750-0.7830 the bullish bias is expected to continue with a target towards 0.80 resistance level. 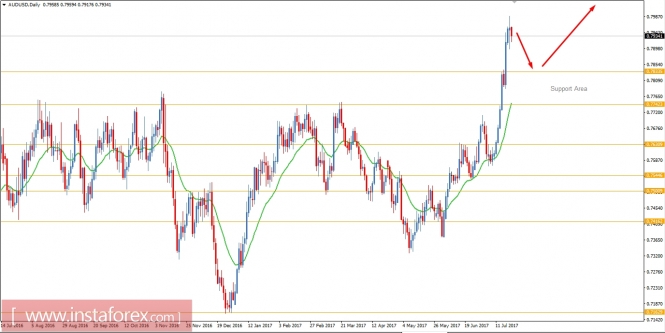 Forecast of the day:

The AUD/USD currency pair consolidates after reaching a local maximum on the wave of weakness in the US dollar as well as positive dynamics in the economies of Australia and China. The central event for the "Australian dollar" will be the publication of inflation data this week. However, for now, it is likely that the pair will move in the range of 0.7890-0.7985. 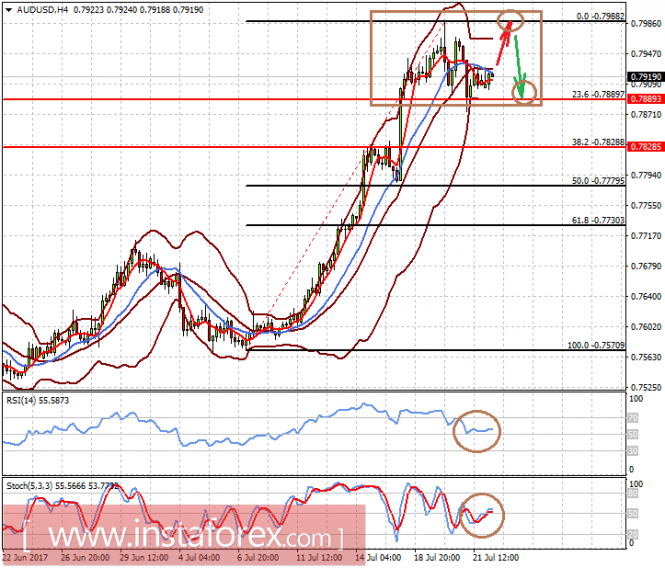 GOLD AND USDX : Daily Signal And Analysis From InstaForex
78 79 80

Friday at 2:27 AM
nasirngah
N
Top
Log in Register