An American millionaire, Mark Shaffer declared his Islam in Saudi Arabia on Saturday, 17th October 2009. Mark was at that time on a holiday in Saudi Arabia to visit some famous cities like Riyadh, Abha and Jeddah for 10 days.

Mark is a well-known millionaire and also an practiced lawyer in Los Angeles, specializing in cases of civil laws. The last big case he handled was the case of the famous American pop singer, Michael Jackson, a week before he passed away.

A tourist guide who accompanied Mark for 10 days in Saudi Arabia, Dhawi Ben Nashir told: Since he set foot for the first time in Saudi Arabia, Mark already started to ask question about Islam and Solat. As soon as he arrived in Saudi, Mark stayed in Riyadh for two days. While in Riyadh, Mark was very interested in Islam. After moving to Najran, we went to Abha and Al-Ula. There, his fascination on Islam grew more obvious, especially the time when we ventured out into the desert.

Mark was amazed to see three Saudi youths who were in our group in Al-Ula, performing solat in the expanse of the very wide desert. A very fantastic panorama indeed.

After two days in Al-Ula, we went to Al-Juf. As soon as we arrived in Al-Juf, Mark asked if I could get him some books on Islam. I then obtained some books on Islam for him. Mark read all those books. The next morning, he asked me to teach him how to perform solat. I then taught him how to pray and take wudhu (ablution). Then, he joined me and performed solat beside me.

We then went to a masjid which was not far from the hotel where we stayed in Jeddah. Since we were quite late, I and many other jamaah had to pray outside, as the number of jamaah was overflowing. I could see Mark observing the jamaah, especially after the Friday prayer was completed, when everybody was shaking hands and embracing each other with radiant and happy faces. Mark was very impressed with what he saw.
When we return to the hotel, Mark suddenly told me that he wanted to become a Muslim. So I said to him: Please have a shower first. After Mark took the shower, I guided him in saying the kalimah of shahadah (declaration of faith) and then he prayed two rakaah. Later on, Mark expressed his desire to visit the Masjidil Haram in Makkah and perform solat there before leaving Saudi Arabia.

In order to fulfill his wish, we went to the Da’wah and Irshad office in the area of Al-Hamro’, Jeddah, to obtain a formal proof of his conversion to Islam, so that he would be allowed to enter the city of Makkah and Masjidil Haram. Then, Mark was given a temporary certificate of his conversion to Islam. As a number of group members who participated in Mark’s visit to Saudi Arabia had to go back to America on Saturday afternoon, Al-Hamdulillah, Ustadz Muhammad Turkistani was willing to send Mark to the Holy Land of Makkah that same morning.

After Mark declared his Islamic faith, he had the chance to express his happiness in Al-Riyadh Newspaper saying: I could not express my feeling at this time but I am being reborn and my life has just started… then he added: I am very happy. This happiness that I am feeling could not be expressed in words especially when I visited the Masjidil Haram and noble Ka’bah.

Regarding his next step after his conversion to Islam, Mark explained: I will learn more about Islam, I will delve deeper into this religion of Allah (Islam) and come back to Saudi Arabia to perform the Hajj.

As to what impelled him into converting to Islam, Mark explained: I have already had information about Islam, but it was very limited. When I visited Saudi Arabia and personally witnessed the Muslims there, and saw how they performed the solat, I felt a very strong drive to know more about Islam. When I read true informations about Islam, I became confident that Islam is a religion of haq (truth). 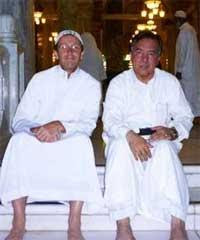 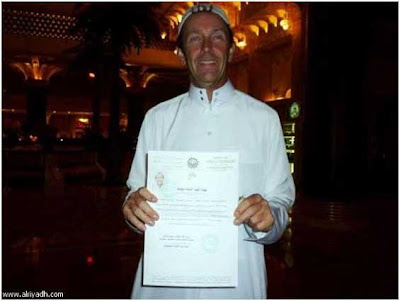 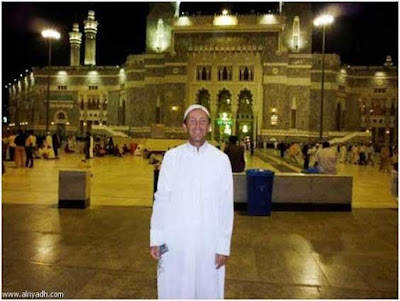