What a great day today

As we were expecting the mining difficulty has started to decrease!

It has currently decreased by 14%.

The next level is expected to be 16% less! (you can check the information on btc.com)

So now the mining earning has increased by 18%! Which means we all started to earn more BTC!

And the process has just started!

We expect further difficulty decrease and earnings increase. Thus, the more powerful equipment you have now the more BTC you will be able to mine.

After halving the BTC rate is expected to grow as it happened in the past. So be sure to use the moment and invest into powerful equipment now!

Join our webinars to know more. It is free and happens twice a day.

ECOS is generally great, I really like the conditions that they created for customers. I am also interested in investing in ASICs, but for now I’ll wait until my contracts end.

It is a real opportunity to earn money, representing ECOS company in your region or country.

Who can join it?

We are looking for motivated and energetic regional representatives with a solid understanding of the project and BTC mining business. Do you consider yourself an Influencer and blockchain evangelist? We are waiting for you! Are you experienced in software development? Do you have a suitable background in IT? You are welcome!

ECOS company is the operator of the Free Economic Zone in Armenia, which significantly reduces mining costs due to cheap electricity prices and the absence of tax fees. Also, due to the geographical location, ECOS has created and maintains the ideal conditions for mining. In addition, 24/7 support is available for customers and partners of our company.

We have already concluded a cooperation agreement with Ambassadors from Spain, Italy, Bangladesh, Bulgaria and Russia. All information about them you can find via the link:

I want to take a part. How can i do that?

Create a new survey on your own or with others at the same time. Choose from a variety of survey types and analyse results in Google Forms. Free from Google.
forms.gle
and wait for the answer.

I don’t understand what it is. But i want to know more.

Soon, we will host a Q&A webinar. If you want to participate please fill in the following form: 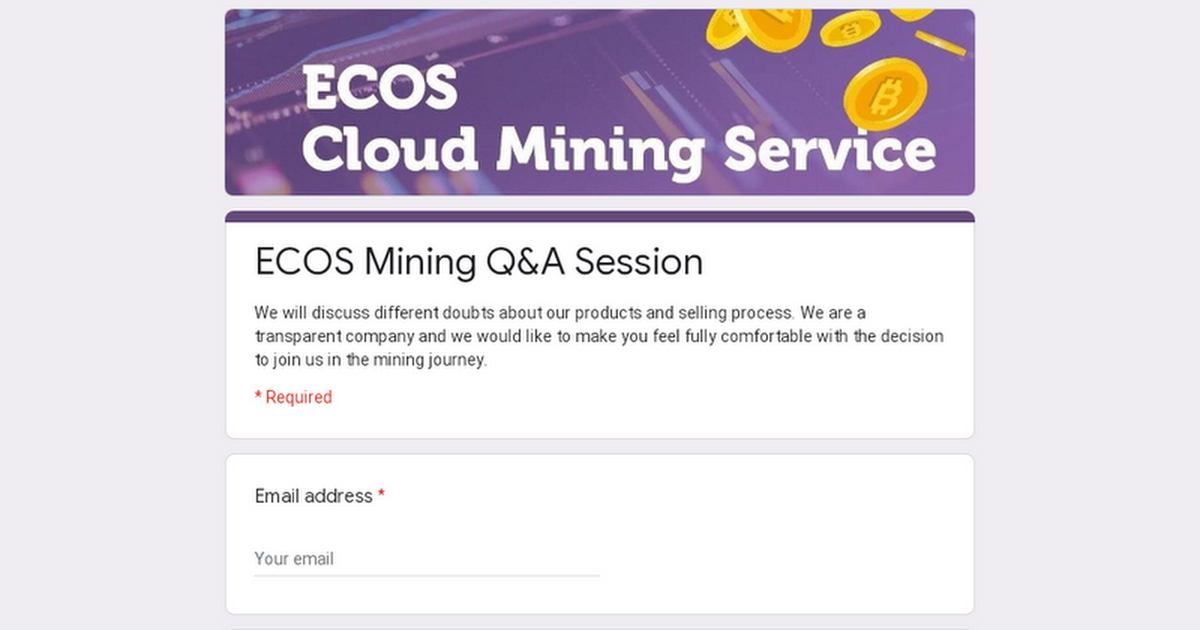 We will discuss different doubts about our products and selling process. We are a transparent company and we would like to make you feel fully comfortable with the decision to join us in the mining journey.

Scared of COVID-19? We have a solution for you!

Today, when the whole world is under the COVID-19 pandemic and the borders of whole countries are being closed, many people are forced to work remotely or just dismissed. Due to the virus many economies will be damaged and many traditional types of business will be whether closed or be restoring for a long time...

What if the pandemic lasts for more than several months? Do you have a plan how to ensure stable earnings during these days to protect yourself and your families?

ECOS is offering a best solution when you don't need to go outside to make a living: just purchase an ASIC on-line, it will be co-located on remote Armenian hosting site up in the mountains, where nothing can stop it from mining Bitcoins - the gold of the future. 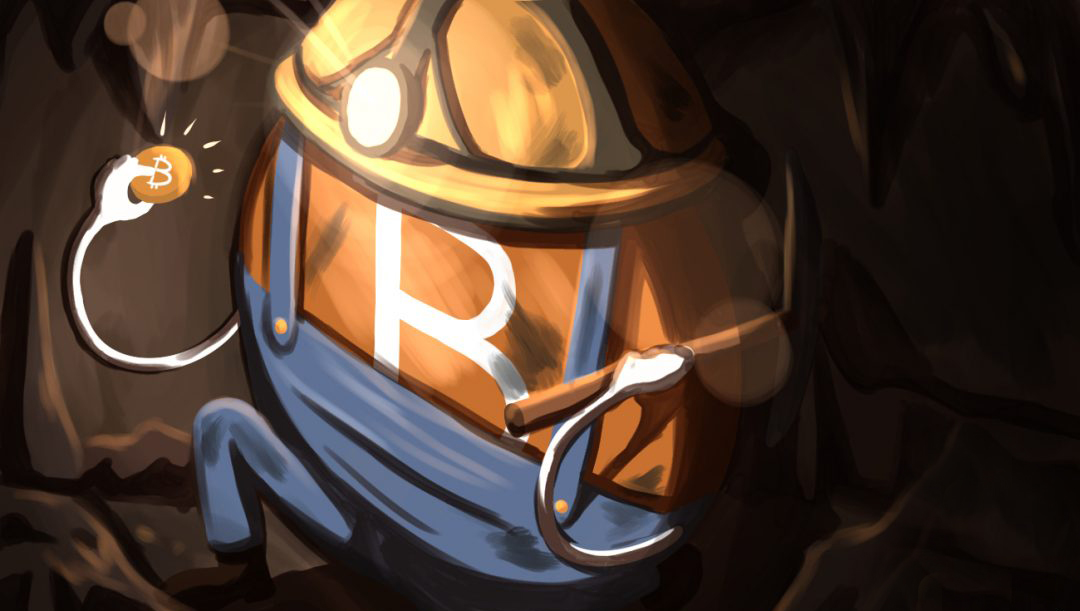 Get the best deal miner before the price increase and receive a 100 USD bonus in case of a purchase until the end of March 2020.

What is ECOS? This is the best services for the best customers!

“I have been a client of ECOS since June 2019. Our cooperation began when I bought a miner. Thanks to the help provided by the company, and especially Anna, I gained confidence in your team. They helped me to solve all the questions that I had.

Beginners in the sector of crypto investments and miners always have a fear of investing in a business associated with bitcoin and cryptocurrencies. All companies say only that they are not going to steal our money and that they really provide the services they are talking about. But, unfortunately, 90% of companies associated with mining are scam. I am very glad that everything is different with ECOS and I hope that our cooperation will last for a long time. Together we will win!"

The Covid-19 epidemic has not yet reached its peak, but today it is absolutely clear that the consequences of the pandemic for the economy will be catastrophic.

If quarantine measures and measures of forced self-isolation last longer than 3-4 weeks, then millions of people will be left without work, and entire sectors of the economy will disappear.

Can mining be a solution?

As of Monday, April 6, the Bitcoin price has been growing!

The №1 cryptocurrency is trading at $7077,86 now, according to Gemini.

Subscribe to our social media to get all the updates from blockchain world!

Chinese entrepreneurs earned $ 14.5 billion in a week while the whole world is self-isolated! How did they manage to do it?

While western stock markets are unstable, shares of Chinese companies are getting more expensive. The fortune of ten Chinese billionaires has increased by almost $ 14.5 billion. Their businesses are mostly related to healthcare.

Who have become richer?

The fortune of Zhong Huijuan, the head of the Chinese drug manufacturer Hansoh Pharmaceutical, increased by 16% and now stands at $ 16.6 billion - $ 2.2 billion more than a week ago. Her husband Sun Piaoyang is $ 1.3 billion richer - up to $ 13.6 billion. Let us recall that Zhong and her husband represent the richest family in China.

Cen Junda. Due to the growth of Jiangsu Hengrui and Hansoh Pharmaceutical stock, the billionaire increased his fortune by 21% to $ 7.8 billion.

The owner of the ophthalmic network Aier Eye Hospital Group Chen Ban has become richer by $1 billion and his current fortune amounts to $ 9.1 billion - this is 13% more than a week earlier. Aier, headquartered in Hunan, owns more than 80 ophthalmologic clinics in the United States, Europe and Hong Kong. This is despite the fact that Aier was forced to close many clinics due to coronavirus outbreak.

But not only healthcare billionaires got richer! The fortune of Qin Inlin, the head of one of the largest Chinese pork producers, Muyuan Foodstuff, increased by $ 1.9 billion to amount $ 20.3 billion. Liu Yonghao, owner of the New Hope Group conglomerate, became richer by 1.8 billion.

Has China's richest man, Ma Huaten, increased his fortune? Yes! His fortune is now estimated at $ 44.5 billion, which is $ 1.1 billion more than a week ago! Due to the quarantine, many people in China remain at home, and the revenues of Pony Ma, the Internet giant Tencent head is increasing in connection to this.

As you can see, some people use coronavirus quarantine as an opportunity to make money. You have this chance as well!

bitly.su
, register on ECOS website and get 0.1 TH / s of free Bitcoin mining power. Subscribe to our social networks to learn more about cloud mining and start earning right now!

Hey, everyone! We are happy to tell you that we've decided to renew our webinars

This Friday we'll tell you how to get away from the crisis. You're welcome

Why is mining more relevant today than ever, and how does the global economic crisis and coronavirus affect it?

Read our today's article about it

Pros and cons of cryptocurrency mining in 2020.

The financial crisis and COVID-19 have restored the faith in mining.