BTC USD 22,882.9 Gold USD 1,867.71
Time now: Jun 1, 12:00 AM
Menu
Log in
Register
Navigation
Install the app
More options
Lights off
Contact us
Close Menu
You are using an out of date browser. It may not display this or other websites correctly.
You should upgrade or use an alternative browser.

Her win marked the first time in a decade that she has made the semis. Victory marked the first time in a decade that the 33-year-old had made it to the last four at Melbourne Park and she will make her first appearance in a Major semifinal since the US Open in 2020 where she went on to lose in the title clash.

“Well, it hurts to beat her because I always want her to do well, but the same time I know I have to play my best tennis,” Azarenka said of her friend and practice partner Pegula.


“She’s been playing amazing, very consistent and I knew from the first point I have to bring it.

“We had so many rallies and I wanted to try to stay there, take opportunities because she was going to take everything if I don’t try to win myself and I’m very proud that I executed my game plan really well.”

Azarenka, the last woman to defend the Australian Open title after her 2013 triumph, played superbly to race into a 3-0 lead over American Pegula in the first set before the highest seed left in the women’s draw finally held serve.

Pegula found her rhythm playing closer to the baseline and controlling the rallies to break back, but Belarusian Azarenka found another gear to move ahead in the contest before both players failed to hold serve in the next.

Former world No 1 Azarenka took the decisive lead, however, and closed out the match to set up a semifinal meeting with Wimbledon winner Elena Rybakina after the Kazakh 22nd seed beat former Roland Garros champion Jelena Ostapenko.

“It’s so amazing to be in the semifinal of another Grand Slam,” Azarenka said.

“I felt especially last year my tennis wasn’t bad but I wasn’t really mentally there to go out there.

“I worked a lot on my mindset, challenging myself on things that I wouldn’t really do before and try to push myself forward.

“Because when you achieved great success, sometimes you become conservative and you’re a bit more hesitant to try new things. This off-season I was like I’ll just be open-minded trying new things and put my head down and work hard.”

The unheralded Pole will now battle for a place in the final. Magda Linette was in disbelief after defeating Karolina Pliskova in their quarterfinal match at the Australian Open. (AP pic)

MELBOURNE: Magda Linette reacted with disbelief after continuing her dream run into the semifinals of the Australian Open on Wednesday with a stunning 6-3, 7-5 victory over former world number one Karolina Pliskova.

The unheralded Pole played wonderfully controlled tennis that belied her ranking of 45th in the world to wrap up a thoroughly deserved victory in the blazing sun on Rod Laver Arena.

Linette had been expected to play second fiddle to compatriot Iga Swiatek at Melbourne Park but will now battle for a place in the final against Aryna Sabalenka or Donna Vekic, who face off in Wednesday’s second quarterfinal.

“It’s so much and I can’t really believe it,” the 30-year-old said. “It’s really dreams come true. We keep going, though, I don’t want to get too excited because we’re still in the tournament, but I’m super grateful and happy.”


After both players were broken in their opening service game, Linette showed the greater composure and took control of the first set as twice Grand Slam finalist Pliskova racked up 14 of the 36 unforced errors she would make over the match.

Pliskova knew she had to raise her game in the second set and ramped up the rasping forehands but Linette had the answer to everything the Czech threw at her.

She saved two break points to hold for 2-2 and then earned three of her own on Pliskova’s next service game only for the Czech to battle back with a couple of big winners.

The set stayed on serve but Linette appeared to have the upper hand, winning one point with a sublime running backhand crosscourt winner, and she pounced to break for 6-5 when Pliskova offered her two chances with a double fault.

She threw her racket to the ground after serving out nervelessly for the match, clasping her head and staring wide-eyed at her box after reaching the last four for the first time in 30 Grand Slam appearances.

“I will never forget this,” she added. “I’m breaking through some really difficult things for me. This will stay with me for life. So I’m really grateful.”

Linette had never been past the third round at a Grand Slam before arriving at Melbourne Park this year and said a change in mentality was behind her fairytale run.

“I think through all my life I’ve been taking mistakes and losses very personally,” she explained. “So to disconnect (life) as a tennis player and a person was really difficult because I felt a lot of times that the mistakes were defining me.

“My coaches did a really great job and I’m really thankful to them because they really put up with a lot of crap.”
Later on Wednesday, Ben Shelton and Tommy Paul meet in the first all-American men’s Grand Slam quarterfinal since 2007, and overwhelming favourite Novak Djokovic faces Andrey Rublev in bid to reach a 10th Melbourne Park semifinal. He will play either Novak Djokovic or Tommy Paul for the Australian Open title. Stefanos Tsitsipas finished the match in style to claim a place in his second Grand Slam final. (AP pic)

Greek third seed Tsitsipas, who had crashed three times at the semifinal stage at Melbourne Park, will play either favourite Novak Djokovic or Tommy Paul for the title.

The 2021 French Open runner-up forced an error on the Khachanov forehand to grab an early break only to immediately surrender his serve.

The pair traded breaks again in a see-sawing opening set but Tsitsipas came alive in the tiebreak and surged ahead in the match before getting his nose in front in the next set when Khachanov’s level dropped.


Despite being rattled by three foot faults and two time violations on serve, Tsitsipas looked more comfortable after winning the second set.

The 24-year-old broke Khachanov for a 2-1 lead in the third but the Russian bravely drew level at 5-5 before it went to a tiebreak.

The Greek regrouped in the fourth set to go 3-0 up and finished the match in style to claim a place in his second Grand Slam final. Serbian Djokovic’s father Srdjan created a distraction for his son ahead of the semifinal after a video emerged showing him posing with fans holding Russian flags, which were banned at Melbourne Park early in the tournament.

With Srdjan declining to attend the semi-final for fear of creating further disruption for his son, fourth seed Djokovic was in a foul mood early at Rod Laver Arena and surrendered a 5-1 lead in the first set as unseeded Paul rallied to 5-5.


Djokovic then knuckled down.

In a furious counterattack, he won 14 of the next 17 games to seal another one-sided victory in his bid for a 22nd Grand Slam title. 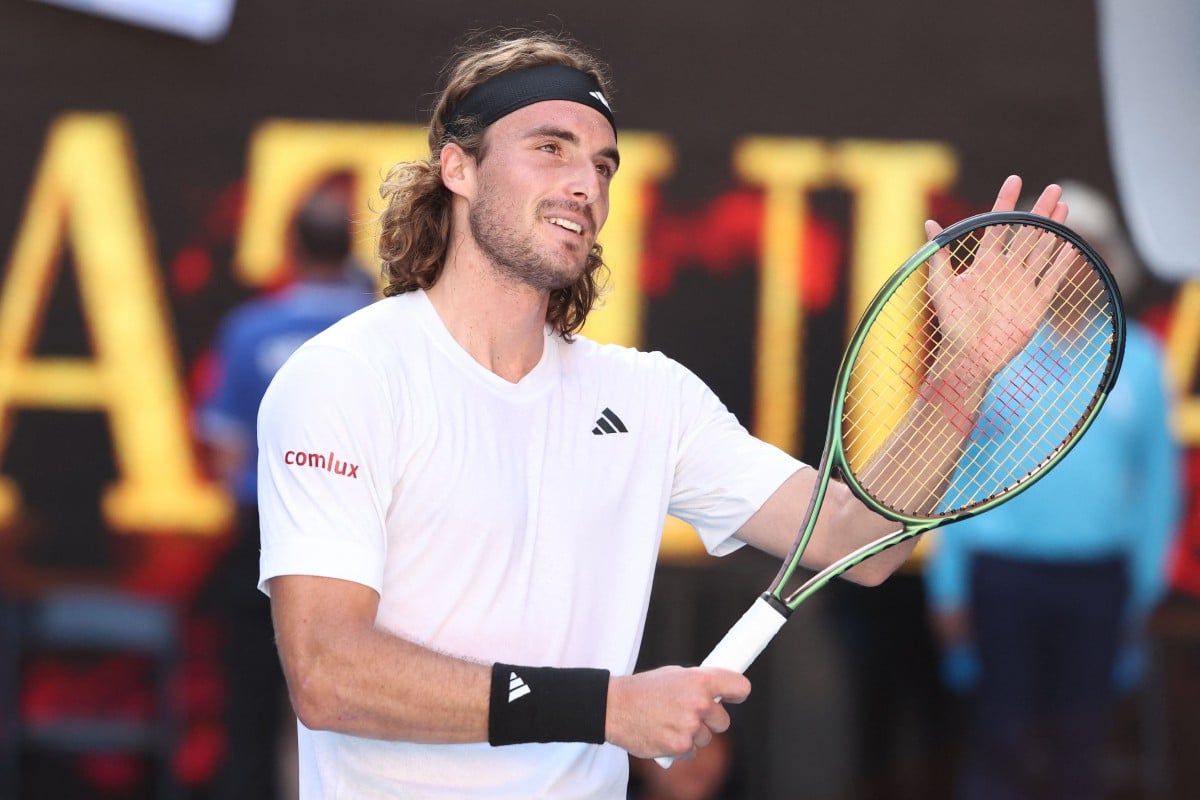