NEW YORK (Reuters) - Novak Djokovic's sensational exit from the U.S. Open on Sunday has ended the Grand Slam reign of the 'Big Three' of men's tennis while ensuring a first-time major champion at Flushing Meadows.
With Roger Federer and Rafa Nadal skipping the tournament, Djokovic was hot favourite to claim an 18th Grand Slam title, but his disqualification for inadvertently hitting a line judge with a ball has thrown the tournament wide open.

Not since Stan Wawrinka's 2016 U.S. Open triumph has a Grand Slam been won by someone other than the 'Big Three', winners of the last 13 major titles.
To find the last Slam without either Djokovic, Federer or Nadal in the quarter-finals requires a much deeper dive into the record books, landing at the 2004 French Open where Federer was stopped in the third round by Gustavo Kuerten.


On Sunday, Djokovic's rivals expressed shock and some sympathy for the Serb, who was defaulted when trailing 6-5 in the first set against Pablo Carreno Busta.
Yet those left standing in the men's draw may be privately thrilled about their chances of claiming the trophy.

"Now I think is the time where it gets really interesting," said fifth seed Alexander Zverev, who thrashed Alejandro Davidovich Fokina in straight sets.

Zverev meets Croatian 27th seed Borna Coric in the quarter-finals and could have faced Djokovic in the semis.

Touted as a future Grand Slam champion since his teen years, German Zverev made the Australian Open semi-finals in January and is well positioned in New York to fulfil that promise.
"It's going to be one of the young guys (winning), I think, if you count Dominic Thiem as a young guy, as well," said Zverev of the 27-year-old Austrian.

"He obviously has a chance to win, as well."

Second seed Thiem, who stopped Zverev at Melbourne Park and pushed Djokovic to five sets in the final, is the major threat on the other half of the draw.

The three-times Grand Slam finalist faces Canadian young gun Felix Auger-Aliassime in the fourth round before a potential quarter-final against unseeded Vasek Pospisil or Australian 21st seed Alex de Minaur.
One of the biggest dangers to Thiem's hopes of a Grand Slam breakthrough may be last year's finalist Daniil Medvedev, a likely semi-final foe.

The rangy Russian third seed lost a five-set classic to Nadal in last year's decider and was declared the man most likely to break the Big Three's Grand Slam stranglehold by John McEnroe and others.

Medvedev will meet unseeded American Frances Tiafoe in the fourth round on Monday, before a potential quarter-final against Italian Matteo Berrettini or fellow Russian Andrey Rublev.
(Reporting by Ian Ransom in Melbourne; Additional reporting by Amy Tennery in New York; Editing by Peter Rutherford) NEW YORK (Reuters) - Novak Djokovic's sensational exit from the U.S. Open on Sunday has ended the Grand Slam reign of the 'Big Three' of men's tennis while ensuring a first-time major champion at Flushing Meadows. 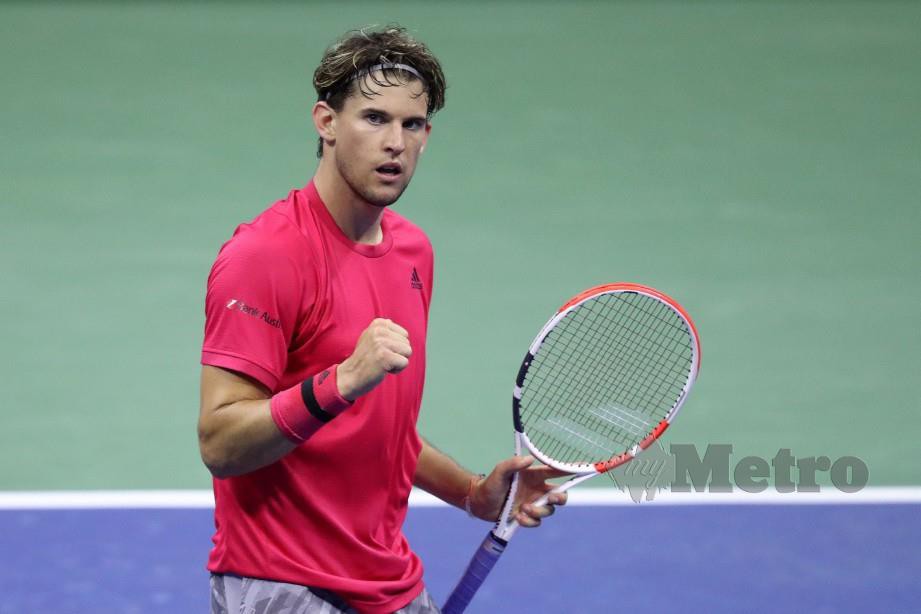 Free Malaysia Today
44m ·
Spaniard came back strongly in the fifth set to close out the match. Pablo Carreno Busta ecstatic after defeating his opponent in the quarterfinals of the US Open on Sept 9. (AP pic)

NEW YORK: Pablo Carreno Busta outlasted an erratic Denis Shapovalov 3-6, 7-6 (7-5), 7-6 (7-4), 0-6, 6-3 in a seesaw battle to advance to his second US Open semifinal.
The 29-year-old Spaniard, the oldest of the men’s quarterfinalists, had looked down and out when his Canadian opponent served him a bagel in the fourth set.

However, after getting some treatment to his lower back, 2017 semifinalist Carreno Busta fought back gamely to seal the deciding set in a match that lasted over four hours.
The 20th seed, who is eyeing a place in his maiden Grand Slam final, will face Alexander Zverev in the last four after the German took down Borna Coric 1-6, 7-6 (7-5), 7-6 (7-1), 6-3 earlier. 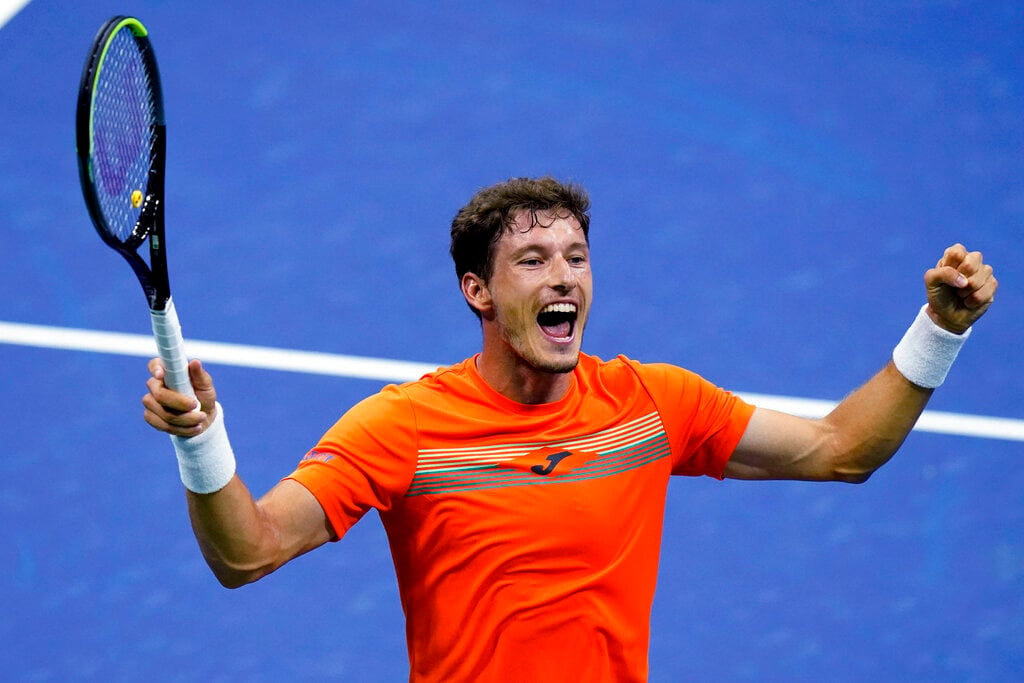 Spaniard came back strongly in the fifth set to close out the match. Dominic Thiem (left) taps rackets after defeating Alex de Minaur (right) during the quarterfinal round of the US Open in New York yesterday. (AP pic)

“I had a great feeling from the first moment on,” said Thiem, gunning for his first Grand Slam title at Flushing Meadows.
“My feeling was that first set, especially until I broke him for the second time, was really intense, very long rallies.

“The first and second set second I guess it looks way easier on the scoresheet than it was actually,” he added.

The 27-year-old Thiem hit 11 aces compared to just one by the 21-year-old de Minaur.

Thiem won a whopping 83% of first serve points, while de Minaur, playing in his first Grand Slam quarter-final, could only manage 49%.

Thiem was able to withstand most of what de Minaur threw at him, getting 81% of returns in.

Thiem will play third-seeded Russian Daniil Medvedev in the last four for a place in Sunday’s final.

The disqualification of Novak Djokovic for accidentally hitting a line official with a ball during the last 16 means the US Open will crown a first-time Grand Slam winner this year. 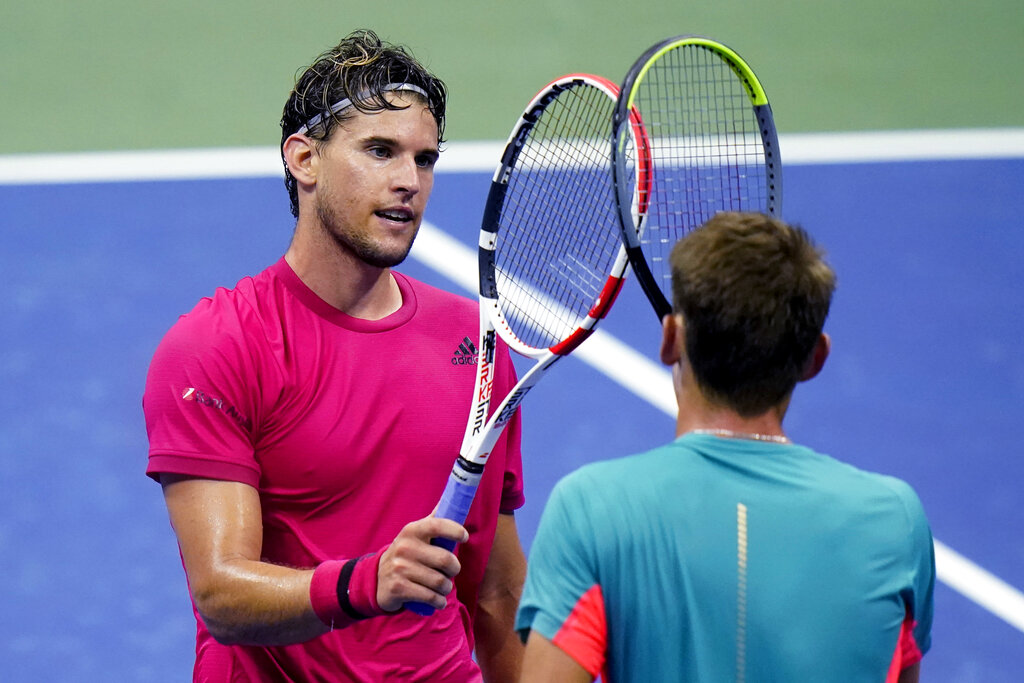 The 27-year-old Austrian is gunning for his first Grand Slam title at Flushing Meadows.

Azarenka sekarang 5-3. is serving for the match
C