BTC USD 32,667.8 Gold USD 1,802.30
Time now: Jun 1, 12:00 AM
Menu
Log in
Register
Navigation
Install the app
More options
Lights off
Contact us
Close Menu
You are using an out of date browser. It may not display this or other websites correctly.
You should upgrade or use an alternative browser.

Tuanku Ismail Petra Ibni Sultan Yahya Petra continues to remain the Sultan of Kelantan although he is incapacitated or absent from the state, the Federal Court heard today.

His lawyer Azhar Azizan Harun submitted that Sultan Muhammad V (Tuanku Muhammad Faris Petra) who was appointed the regent of Kelantan on May 24 last year, by the Council of Succession by reason of his father's illness, did not take over exclusively the role of the Sultan. 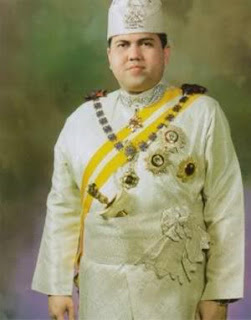 Son Did Not Have A Powers Of Sultan

The lawyer for former Kelantan Ruler Tuanku Ismail Petra Sultan Yahya Petra argued in the Federal Court today that Tuanku Muhammad Faris Petra did not have the power to abdicate his father and become the state’s new Ruler.

Lawyer Azhar Azizan told the court that as the Regent then, Tuanku Muhammad Faris only had the right to exercise powers which are necessary to attend to the affairs of the state.

“The Regent therefore is not conferred the full powers of the Sultan whilst acting as Regent. Regent is not a Sultan, Sovereign or Ruler,” he told the Federal Court.

He has remained incapacitated after suffering a stroke on May 14 last year, paving the way for the council to name his 35-year-old son as Regent last year.
Azhar told the Federal Court today that the status of a Regent is not equal to that of a Sultan.

“The Regent does not take over exclusively the role of the Sultan. The Regent, being a caretaker Ruler, can only perform those duties which a Sultan is required by the Kelantan Constitution to perform but which he cannot do because of his incapacitation or absence,” he said.

He said the Regent is only allowed to exercise powers which belong to the Sultan.

On September 13, the then Regent Tuanku Muhammad Faris was proclaimed the new Kelantan Sultan using a new law that was gazetted in July, stoking a constitutional crisis that began after his father fell ill last year.

The announcement was made pursuant to Article 22A of the Kelantan State Constitution — gazetted on July 22, 2010 — which covers the removal of a Sultan from the throne due to a major and serious handicap or illness.

However, Azhar argued that Article 22A only states that a Regent may be appointed when the Sultan is incapacitated but does not entail the removal of power.

“It is therefore clear that the Regent was only to have the right to exercise the powers which are necessary to attend to the affairs of the state and nothing more. The Regent, it is submitted with respect, does not subsume all the powers of the Sultan or the Sovereign.

He explained that the Regent may only assume the powers for state affairs but not the powers which are personal to the Sultan and Sultanate.

However, Tan Sri Cecil Abraham rebutted that it is absurd to compartmentalise the powers of the Sultanate into Part One and Two of the state’s constitution.

“You cannot read the second part of the (state’s) constitution in isolation but with the first part. I think it is absurd that my learned friend appears to suggest that there is a difference between the first and second part,” said the lawyer representing the current Kelantan Ruler.

Abraham previously argued in his submission that Tuanku Ismail Petra did not have the right to question his son’s powers as Regent in court as he was no longer the Ruler due to his incapacitation.

Abraham pointed out that the Regent was the only person entitled to exercise the powers of His Royal Highness due to the incapacity of Tuanku Ismail Petra as the then Sultan of Kelantan.

However, Azhar argued today that the Sultan continues to remain as the Ruler even if he is incapacitated or absent from the state and is entitled to exercise his powers.

“If an incapacitated or absent Sultan is to be excluded from making a reference to the Federal Court under Articles 63 (2) Part 1 and 4 (4) Part 2, then the express words must be used in the Kelantan Constitution to exclude him. Without these express words, the Federal Court would now be legislating and importing its own words into the Kelantan Constitution,” he said.

Article 63 (2) of Part 1 and Article 4 (4) of Part 2 state that that His Royal Highness may refer to the Federal Court for its opinion any question as to the effect of any provision of the laws of the state constitution which has arisen or appears to him to be likely to arise, and the Federal Court shall pronounce in open court its opinion on any question so referred to it.

“We do not want rush into a decision although it involves the issue of jurisdiction but it could also have an effect on other state constitutions,” he said.

The trial was adjourned to a date yet to be fixed for the decision.