BTC USD 17,213.8 Gold USD 1,789.20
Time now: Jun 1, 12:00 AM
Menu
Log in
Register
Navigation
Install the app
More options
Lights off
Contact us
Close Menu
You are using an out of date browser. It may not display this or other websites correctly.
You should upgrade or use an alternative browser.

Iranian women - before and after the Islamic Revolution​

Share
The Islamic Revolution of 1979 brought seismic changes to Iran, not least for women. One area that has come under scrutiny is the way women dress and wear their hair - the old Shah, in the 1930s, banned the veil and ordered police to forcibly remove headscarves. But in the early 1980s, the new Islamic authorities imposed a mandatory dress code that required all women to wear the hijab.
Here are some images showing what life was like for Iranian women before the institution of clerical rule, and how it has changed since. Studying at Tehran University in 1977: While many women were already in higher education at the time of the revolution, the subsequent years saw a marked increase in the number attending university. This was in part because the authorities managed to convince conservative families living in rural areas to allow their daughters to study away from home.
"They tried to stop women from attending university, but there was such a backlash they had to allow them to return," says Baroness Haleh Afshar, a professor of women's studies at the University of York who grew up in Iran in the 1960s.
"Some educated people left Iran, and the authorities realised in order to run the country they needed to educate both men and women." Window shopping in Tehran in 1976: Before the revolution, the hijab was already widely worn but many women also chose to don Western-style clothes, including tight-fitting jeans, miniskirts and short-sleeved tops. "The shoes haven't changed - and the passion for shoes is in all of us! Women in Iran are no different from women the world over, and going shopping is just a means for women to get away from every day stress," says Prof Afshar. Friday picnic in Tehran in 1976: Families and friends tend to get together on Fridays, which are weekend days in Iran. "Picnics are an important part of Iranian culture and are very popular amongst the middle classes. This has not changed since the revolution. The difference is, nowadays, men and women sitting together are much more self-aware and show more restraint in their interactions," says Prof Afshar. Hair salon in Tehran in 1977: "This is a scene you would no longer expect to see in Iran - but even after the Islamic Revolution, hairdressers continued to exist," says Prof Afshar. "Nowadays you wouldn't see a man inside the hairdressers - and women would know to cover up their hair as soon as they walked out the door. Some people may also operate secret salons in their own homes where men and women can mix." Bodyguards surround the shah in 1971: A young woman approaches Shah Mohammad Reza Pahlavi (far right) at a huge party marking the 2,500th anniversary of the Persian monarchy - the extravagance of the event was widely condemned by his left-wing and clerical opponents. "By this time, the shah was already very much disliked and some believe this image of excess and indulgence may have contributed to events leading up to the revolution eight years later," Prof Afshar explains. Women rally against the hijab in 1979: Soon after taking power, Iran's new Supreme Leader Ayatollah Ruhollah Khomeini decreed that all women had to wear the veil - regardless of religion or nationality. On 8 March - International Women's Day - thousands of women from all walks of life turned out to protest against the law. Protest outside the US embassy in Tehran in 1979: Revolutionary students took dozens of US embassy staff hostage while thousands of anti-US demonstrators surrounded the compound.
"At this time it was normal to see different types of people allied in their absolute hatred of America in Iran," says Prof Afshar. "The Americans and the British have a long history in Iran of attempting to both influence and take over oil in Iran, so this deep-rooted mistrust of the US and UK goes back a long way." Family heads to Friday prayers in 1980: "Friday prayers are a time for people who are believers or supporters of the Islamic authorities who don't want to be labelled as dissidents to go out and get together - it's a moment of solidarity," says Prof Afshar. "But they are still very much within the male domain. The woman would not be allowed into the same room as the men - they would sit in a separate area for prayer, away from the men." Wedding dress shopping in Tehran in 1986: "The wedding dresses on display are all western - Iranian women will essentially wear what they want as long as it's behind closed doors," Prof Afshar explains. "Weddings and parties are supposed to be segregated, so it doesn't matter what you wear if there are only female guests present. But there are mixed-sex parties that do still go on - some people hire bouncers to watch the door, others pay the local police to turn a blind eye." Walking in Tehran in 2005: Not all women in Iran opt to wear the black chador, a cloak that covers the body from head to toe and only leaves the face exposed. Many prefer to wear loosely fitted headscarves and coats. "The real question is how far back do you push your scarf? Women have their own small acts of resistance and often try as far as possible to push their scarves back," says Prof Afshar. Caspian Sea beach in 2005: Iranian women are forbidden from bathing in public wearing swimsuits. "Men and women aren't supposed to swim together - but they find ways around this by renting boats to take them far out into the sea, where they can swim side-by-side," says Prof Afshar. Pro-hijab rally in Tehran in 2006: More than 25 years after the revolution, women backing the hardliners in the establishment staged their own rallies to protest against what they saw as the authorities' failure to enforce the compulsory hijab law. Here, the women are all dressed in black chadors with the exception of a little girl. Watching football from a Tehran shopping centre in 2008: Though women were never officially banned from watching men's football matches in Iran, they are often refused entry to stadiums and some of those who have tried have been detained. Before the revolution, women were allowed to attend sporting events.
All pictures copyright.
Click to expand... 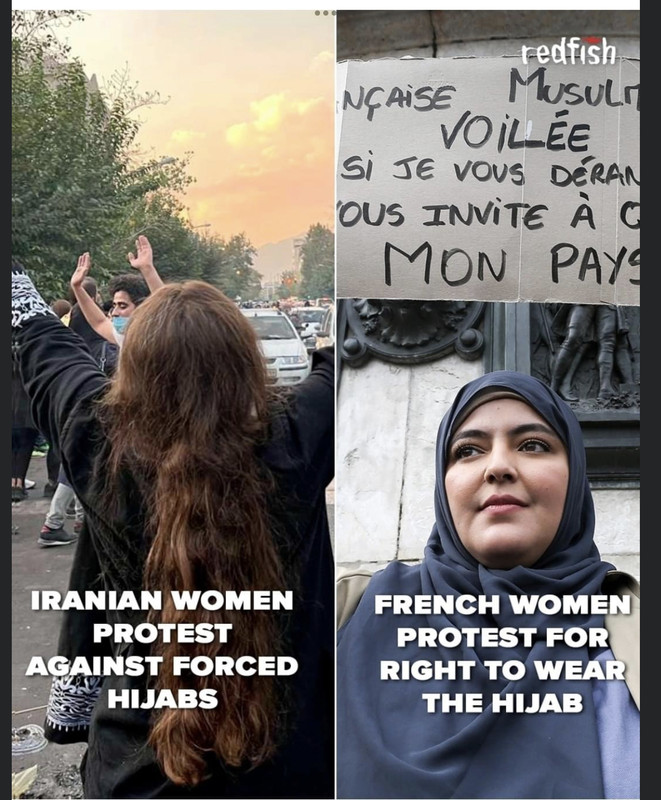