BTC USD 23,390.6 Gold USD 1,865.94
Time now: Jun 1, 12:00 AM
Menu
Log in
Register
Navigation
Install the app
More options
Lights off
Contact us
Close Menu
You are using an out of date browser. It may not display this or other websites correctly.
You should upgrade or use an alternative browser. Kalimah showing the brinjals she grew in a barrel in front of her house in Taman Nesa, Skudai.

FOR gardening enthusiast K. Kalimah, growing her own vegetables in a plastic barrel seemed strange at first.

The 66-year-old said since planting the edible greens such as kangkung, cili padi, Brazilian spinach, spring onion, brinjal and ladies’ fingers in a single barrel last November, her family had been eating much healthier.


“We can also save money as I use the vegetables for our meals.

“My family says the vegetables are tastier as no chemicals are used,” she said when interviewed at her home in Taman Nesa, Skudai in Johor.

Kalimah said she was able to harvest different types of vegetables and herbs, including mint, turmeric leaves, curry leaves and coriander at least 10 times a week.

She also places food scraps and leftovers into a tube fixed to the centre of the barrel to be turned into compost, which acts as fertiliser for her crops.

“The daily routine of tending to my vegetables is also a form of exercise,” she said.

Kalimah is one of the participants of the food waste barrel programme started by Skudai Masyarakat Setia Jujur Association.

Similarly, housewife M. Mageshwari, 43, said her husband and three children had been enjoying the fruits of her labour since participating in the programme.

“It is a joy to watch the tomatoes, roselle leaf (daun asam), pennywort, spinach and ladies’ fingers growing outside my house.

“I often share the produce with my neighbours and they return the favour and give me food too,” she added.

The association’s chairman S. Kogilavani said the programme aimed to educate the community about reducing food waste and getting more people to plant their own vegetables.

“My husband AK Murugan and I started learning about green practices in 2013 and we wanted to share our knowledge with the community.

“Initially, the residents were sceptical about planting vegetables in a barrel.

“They were also worried that the compost would emit a foul smell.

“After seeing how the plants grew, we received enquiries from others wanting to learn this method,” she said, adding that they were planning to venture into aquaponics soon.

Kogilavani said the food waste barrel programme was aided by the RM10,000 they received through the Iskandar Puteri Community Grant from Iskandar Puteri City Council in support of low carbon and green initiatives.

“We are applying for an additional grant to expand the programme so it can benefit more residents,” she added. 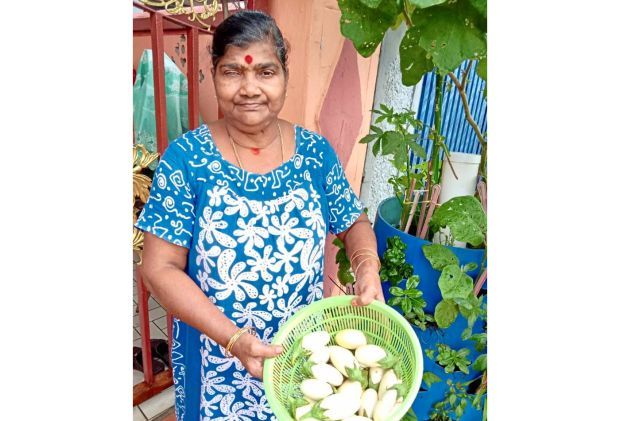 FOR gardening enthusiast K. Kalimah, growing her own vegetables in a plastic barrel seemed strange at first.