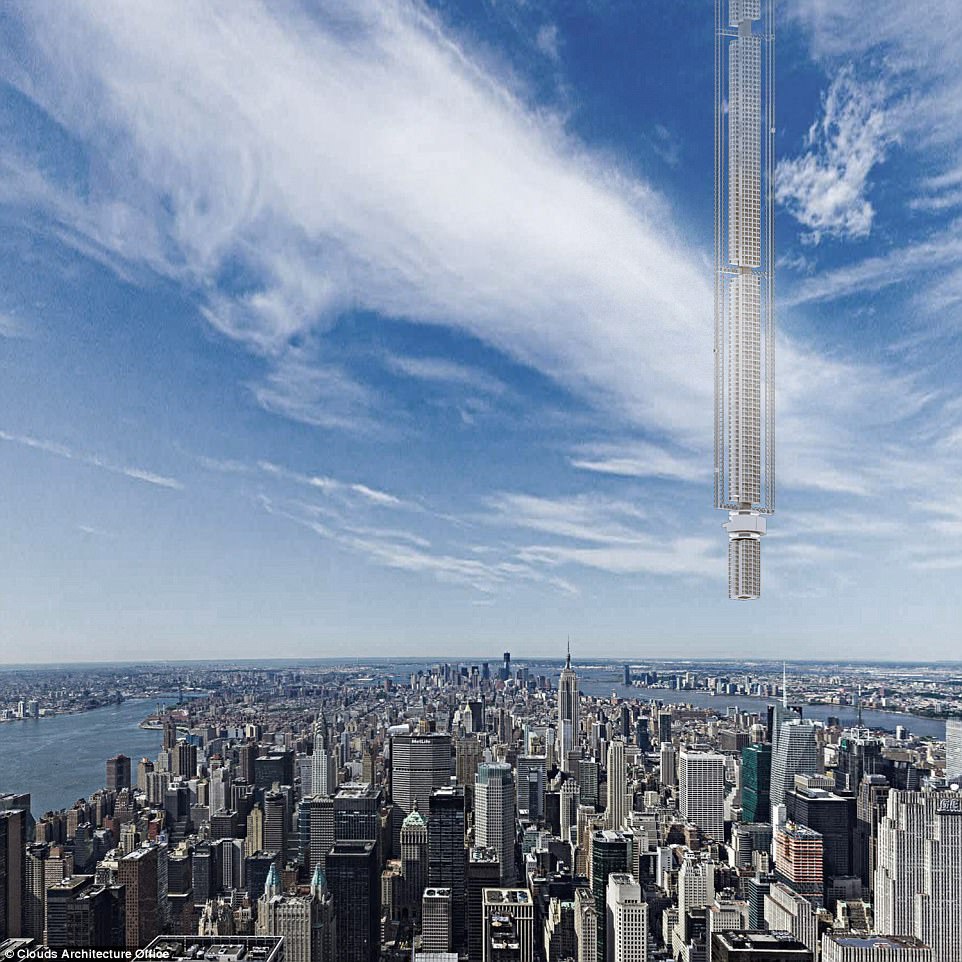 A New York architecture firm has unveiled designs for a skyscraper that is out of this world. Deemed the ‘world’s tallest building ever’, Analemma Tower will be suspended from an orbiting asteroid 31,068 miles (50,000 km) above the Earth– and the only way to leave is by parachute. The orbital path would swing the tower in a figure eight pattern between the northern and southern hemispheres each day, taking residents on a tour through different parts of the world - all in just a 24 hour orbital cycle. And the amount of daylight increases by 40 minutes at the top of the tower due to the curvature of the earth. 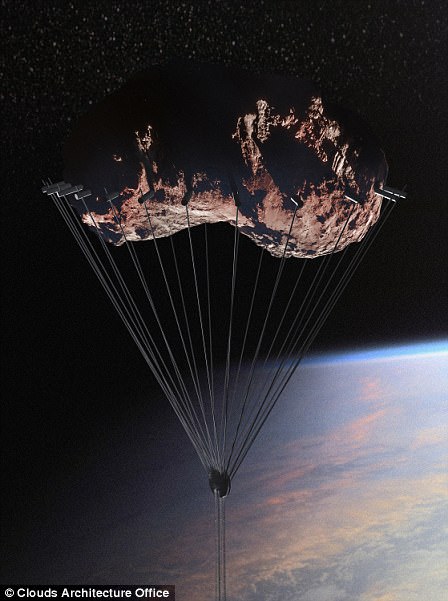 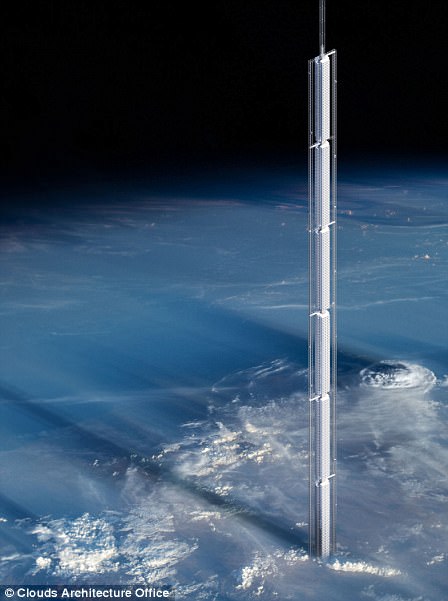 The design will use a system called the Universal Orbital Support System (UOSS), which attaches a high strength cable to an asteroid that is lowered to Earth and attached to the tower. Since this new tower typology is suspended in the air, it can be constructed anywhere in the world and transported to its final location. The radical design was created by Clouds Architecture Office, which is also the mastermind behind proposals for a Mars house and a cloud city. The firm's latest design, Analemma Tower, will 'overturn the established skyscraper typology', as it builds from the sky down instead of the ground up.

The proposal calls for Analemma to first be constructed over Dubai, which has proven to be a specialist in tall building construction at one fifth the cost of New York City construction. The massive skyscraper will be setup in sections and each with a designated purpose. Residents will have access to a gardening area, a place for worship and in the bottom level will be sections for dining, shopping and entertainment. The architects plan to take full advantage of the skyscraper's location and will place solar panels at the upper most levels to generate power from the sun. And residents will enjoy fresh water from condensation of clouds and rainwater, which will be collected and purified. 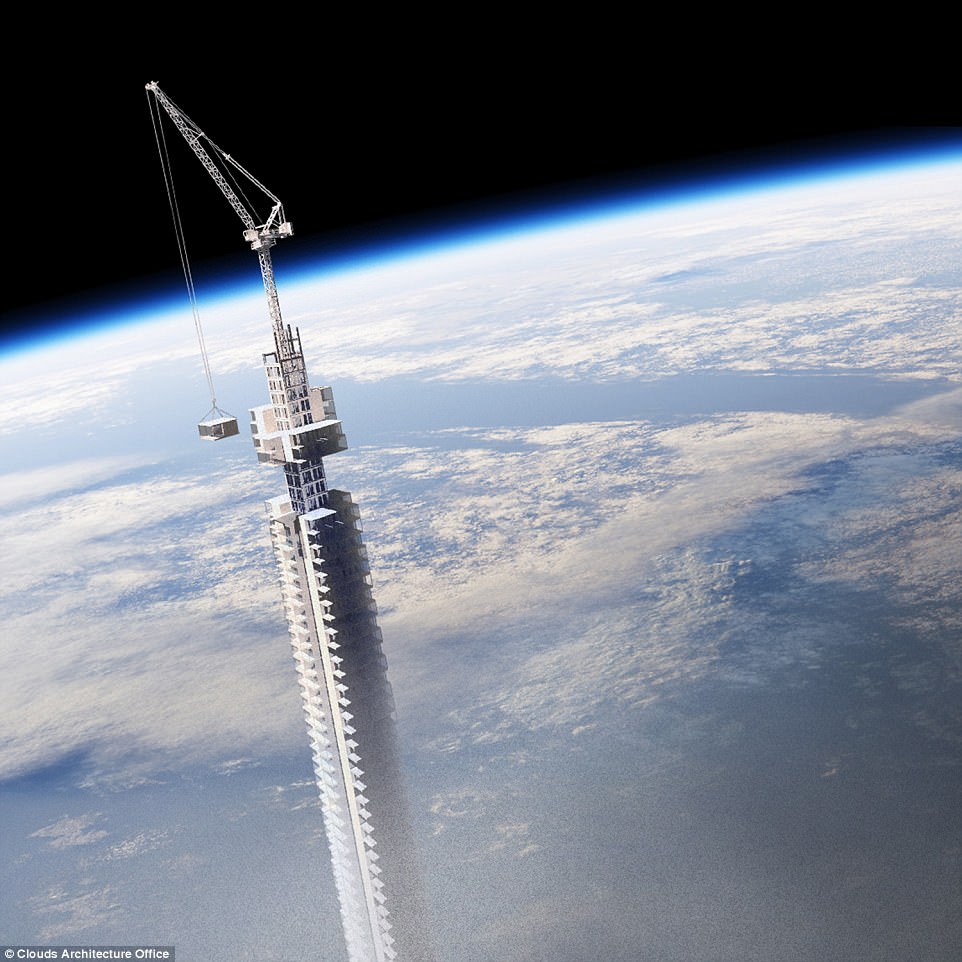 ‘In 2015 the European Space Agency sparked a new round of investment in asteroid mining concerns by proving with its Rosetta mission that it's possible to rendezvous and land on a spinning comet,’ shared the firm. ‘NASA has scheduled an asteroid retrieval mission for 2021 which aims to prove the feasibility of capturing and relocating an asteroid.’ 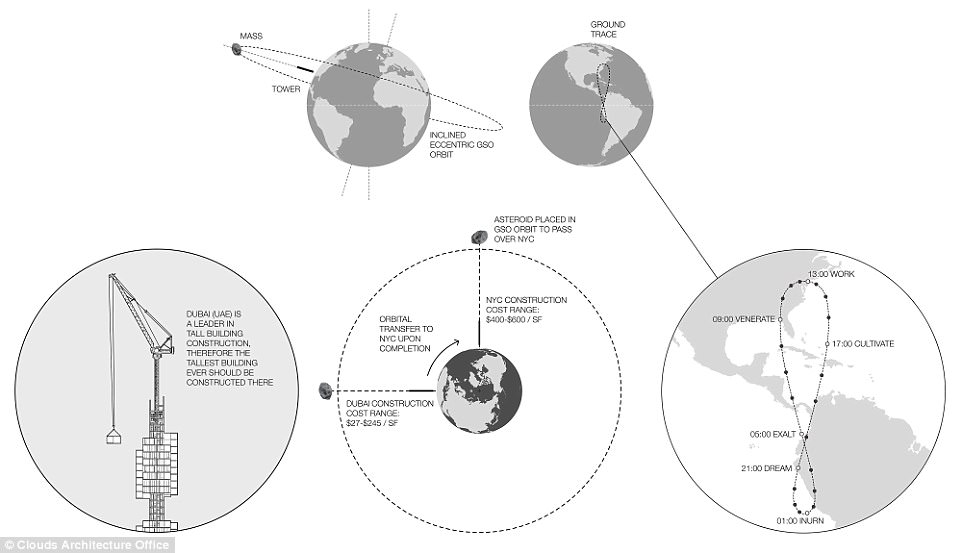 The team discovered that there is most likely a height that people could not tolerate living due to the extreme conditions. ‘For example, while there may be a benefit to having 45 extra minutes of daylight at an elevation of 32,000 meters, the near vacuum and -40C temperature would prevent people from going outside without a protective suit 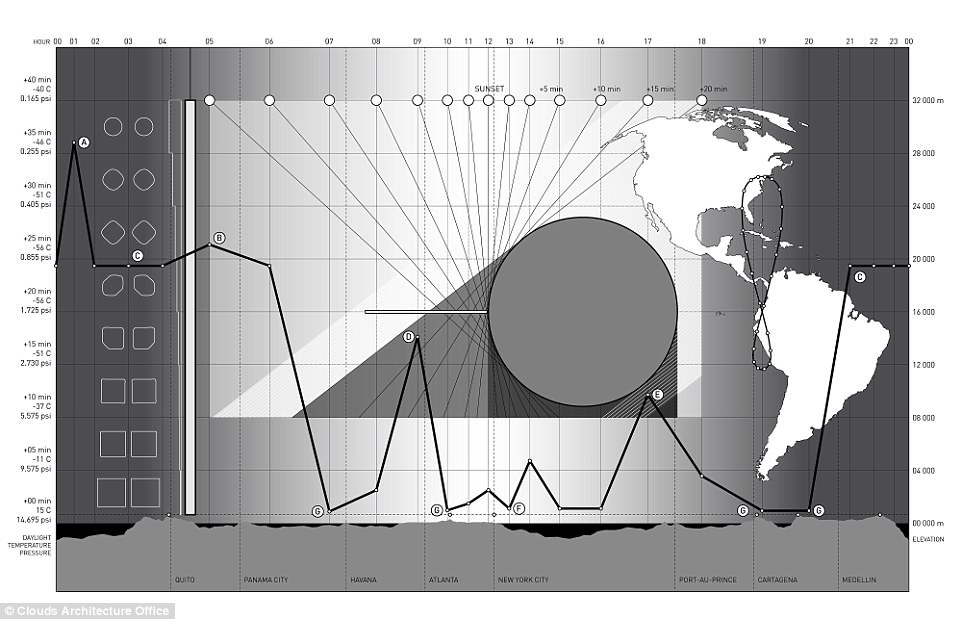 The tower would travel on a figure-8 path over certain major cities in the northern and southern hemispheres - such as New York City, Havana, Atlanta and Panama City. And the amount of daylight increases by 40 minutes at the top of the tower due to the curvature of the earth