Profitable exchange with BestChange! Not easy, but super easy!

Ripple gets in the top 100 payment systems, and oil prices are more volatile than bitcoin

Ripple got in the top 100 international payment systems

The TOP-100 was compiled by the analytic company FXC Intelligence, along with Ripple, the list included Visa, Bank of America and PayPal. In addition, it contains MoneyGram, TransferGo and other payment systems that have partnered up with the blockchain project.

Cryptocurrencies are usually blamed for considerable price fluctuations, but as it turned out, at the moment bitcoin is far from being the most unstable asset.
At the end of January, The West Texas Intermediate (WTI) oil price's one-month realized amounted to 119.6%, while that of BTC - 54.5%. For comparison, in gold this indicator is 17.3%, the S&P 500 - 11.6%.

This is not the first time that the oil rate exceeds bitcoin in the range of fluctuations. For example, in the fall of 2019, WTI volatility increased to 133%, when BTC did not exceed 50%. Realized volatility is the standard deviation of daily price fluctuations in percentage. BCH, BCV and Tron dip by 20% in two days, and Morgan Creek founder urges not to trust Buffett

Founder of Morgan Creek: “I would not trust Buffett”

One shouldn’t listen to Warren Buffet’s advice regarding cryptocurrency, Anthony Pompiliano, Founder of Morgan Creek, thinks. According to him, Buffet is a great investor but knows nothing about technology.

“People will listen to Warren Buffett’s opinion because he is one of the best investors of all time. When it comes to technology, though, I think there are better people to listen to. I don’t take technology advice from someone who uses a flip phone or doesn't use email, ” Pompliano said.

He also added that Bitcoin will become the
will be the global reserve currency in the future, and national digital currencies will not be able to compete with it, since they are controlled by states and are subject to inflation.

Cryptocurrency market is in the red: at the moment, all TOP-20 assets, excluding the USDT stable coin, are showing a decline.

The total market capitalization dropped by $31 billion: from $290.074 to $259.161. According to analysts, the reason lies in the fact that the price of bitcoin failed to gain a foothold above the strong level of $10,000. 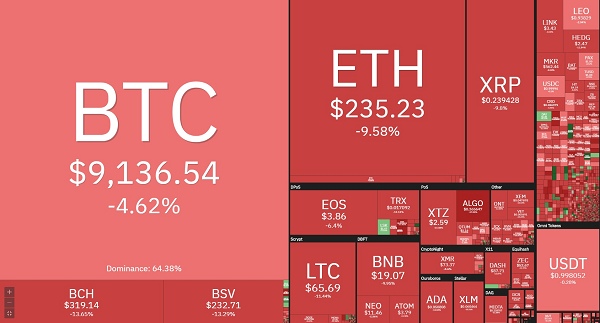 Build Your Own Beehives With the Garden Beehive Construction Guide 2.0

How To Create Apps Without Coding with Apploadyou!
4 5 6