BTC USD 38,824.3 Gold USD 1,873.01
Time now: Jun 1, 12:00 AM
Menu
Log in
Register
Navigation
Install the app
More options
Lights off
Contact us
Close Menu
You are using an out of date browser. It may not display this or other websites correctly.
You should upgrade or use an alternative browser. The government of China is ringing in the Muslim holy month of Ramadan with a report praising itself for its commitment to human rights in Xinjiang, the westernmost Muslim-populated province in which communist officials have taken large strides to strip public life of Islamic customs.

Xinjiang is home to most of the nation’s Muslim Uighur minority and borders both Pakistan and Afghanistan. Authorities in Beijing have expressed concern that Muslim separatist groups in the region are feeding the population of Islamic State jihadists in the group’s Middle Eastern strongholds in Syria and Iraq. The Islamic State recently released a video featuring Uighur terrorists who vowed to return home to conduct terrorist attacks there.

China’s state-run, English-language media ran the full report from the State Council Information Office on Thursday, which applauds the Chinese government for taking “effective measures to develop the economy, improve people’s living standards, enhance the well-being of the public, promote ethnic unity and progress, and safeguard the basic rights of all ethnic groups in Xinjiang.”

“Normal religious needs of local people have been satisfied,” China’s Global Times asserts, citing the report. The text of the report asserts that “the people of all Xinjiang’s ethnic groups enjoy the same status and the same rights, and must fulfill the same obligations in accordance with the law. Their political rights as citizens are fully protected.”

The five-part report spends much of its energy on “environmental” rights, health care, and economic equality. On health care, for example, the report condemns the free government preceding the communist People’s Republic of China, claiming Xinjiang’s population suffered “a shortage of doctors and medicines, and epidemics of diseases, such as the plague, smallpox, and cholera.”

It then goes on to claim that the Chinese government has successfully curbed radical Islamic terror in Xinjiang:

Since the 1990s, violent terrorists, nationalist separatists, and religious extremists have plotted and committed a series of violent terrorist crimes, causing loss of life to and damaging the property of people of all ethnic groups…

The Xinjiang Uygur Autonomous Region has taken a series of measures designed to strike against violent terrorist crimes, strengthen social protection and control, modernize the governance system and capacity, and safeguard the lives and property of all the people of Xinjiang, whatever their ethnic group. These measures include the promulgation and implementation of the Measures of the Xinjiang Uygur Autonomous Region on Enforcement of the Anti-Terrorism Law of the People’s Republic of China.

The report then asserts that China has protected freedom of religion in Xinjiang by expanding the government’s power to control religious practices by implementing “Regulations on Anti-extremism of the Xinjiang Uygur Autonomous Region” and working to “strengthen management of religious affairs in accordance with the law.”

The claims in the report echo those of a similar publication released almost exactly one year ago, titled “Freedom of Religious Belief in Xinjiang,” which asserted that “Normal religious activities in Xinjiang are protected by law, and religious organizations are responsible for coordinating internal religious affairs and the government should not interfere.” This year, the Chinese government white paper did not claim that the government had minimized its interference in religion, instead claiming its interference aided the “normal” practice of religion.

The new report also emphasizes the government’s push to replace the Uighur language with “Putonghua,” or “common tongue” (Mandarin). “The Constitution stipulates that the state promotes the nationwide use of Putonghua in accordance with the law,” the report notes but asserts that the common use of Uighur in public is a sign the government protects the Uighur language. In reality, the Chinese government announced a nationwide campaign to eradicate non-Mandarin languages in January, which corresponded with the development of a plan to promote intermarriage between Uighurs and the Han minority and the imposition of a variety of ordinances that prohibit overly Islamic activity in public.

Among the activities prohibited in public in Xinjiang is the wearing of burqas in the capital city of Urumqi, the use of public transportation while wearing any Islamic garb, and the observance of the Ramadan fast by Communist Party officials. “If we think that someone may be fasting, we will invite them to the village office to ‘drink tea’ with us to see if they are fasting or not,” Alim Abdurahman, a Xinjiang official, told Radio Free Asia last year.

The Chinese government also forces Muslim shops to carry a variety of alcohol and cigarette brands to encourage the violation of Quranic laws against the consumption of these products.

Beijing has also banned Muslim parents in Xinjiang from giving their children overly religious names like “Islam,” “Jihad,” or “Muhammad.” 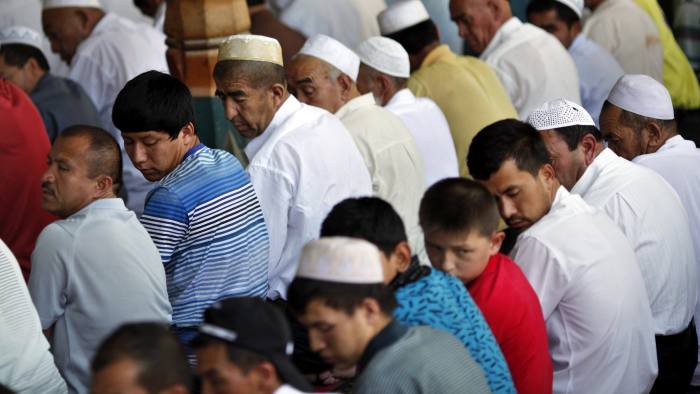 
China has launched a campaign to repatriate and interrogate Uighurs studying overseas, the latest draconian measure against the Muslim minority.

More than 100 have been detained in Egypt after failing to obey Chinese demands to return, according to activists and fellow Uighur students. While the campaign has mainly targeted Uighurs studying in Muslim-majority countries, China has also pressed at least one student in the US to return.

The repatriations appear to have been motivated by fears that Uighur students were being radicalised abroad, observers said.

Uighurs, who have cultural and linguistic ties to Turkey, have long faced curbs on their religious practices, employment, language and dress. Once dominant in the western province of Xinjiang, they are now a minority after years of Beijing-encouraged migration by Han Chinese.

Students and activists say Chinese officials have since May been sending notices to overseas Uighur students demanding their immediate return — often after detaining their parents in China. Several students who obeyed were held upon arrival in China, according to friends contacted by the Financial Times.

Rights groups say China has violated international law by orchestrating the forcible repatriation of Uighurs. More than 100 were deported from Thailand in 2015, while Malaysia has sent at least 28 back to China since 2013.

China was attempting to “suppress any type of Islam they don’t directly control”, said William Nee, a researcher at Amnesty International in Hong Kong. “Whether it’s Islam entering or Protestant Christianity or liberal democracy, all of these things are seen as threats ideologically that come from abroad.”

About 150 students at Cairo’s Al-Azhar University who ignored China’s summons were taken to prisons in the Egyptian capital from early July, according to activists and students who managed to leave the country.

“I heard from the officer in charge that it was related to very big matters and politics between Egypt and China,” said one Uighur student who reported being among dozens detained in Alexandria airport. “The officers told us you would be deported to China, and when you get there you will go to prison.”

He was allowed to depart for Turkey after four days. At least 22 of the detained have been deported to China, according to two people in contact with Uighur students. Others have fled the country.


Please use the sharing tools found via the email icon at the top of articles. Copying articles to share with others is a breach of FT.com T&Cs and Copyright Policy. Email [email protected] to buy additional rights. Subscribers may share up to 10 or 20 articles per month using the gift article service. More information can be found at https://www.ft.com/tour.
https://www.ft.com/content/0ecec4fa-7276-11e7-aca6-c6bd07df1a3c

China and Egypt have acknowledged that Chinese nationals had been detained in Egypt but characterised the detentions as a response to violations of immigration law.

“We would like to reiterate that Chinese citizens in Egypt must abide by the laws and regulations of Egypt and avoid participating in activities that do not match their residence status,” said the Chinese foreign ministry.

Egypt and China have strengthened diplomatic ties in recent years. The Suez Canal, which connects the Mediterranean Sea and Indian Ocean, is a key link in China's $900bn Belt and Road infrastructure initiative, and China remains Egypt's top source of imported goods.

While the main focus of China’s repatriation efforts have been students in Muslim-majority countries such as Egypt and Turkey, they have also reached western shores.

One Uighur studying in the US was pressed to return after his parents were detained, according to several people who know him. He, too, was detained on arrival but has since been released.

Activists from the Uighur community are also under pressure overseas — last week police in Rome detained Dolkun Isa, head of Munich-based exile group the World Uyghur Congress, as he prepared to give a speech on the restrictions faced by his ethnic group.

The WUC called for an investigation into whether the detention had been at China’s behest, voicing fears over “the infiltration of Chinese influence in the west”.

An Italian official confirmed Mr Isa had been briefly held for a “police check” but declined to specify the reason.

Xinjiang’s Uighur clampdown has escalated in recent months. In April members of the ethnic group were banned from giving newborns Muslim names, including Mohammed, while last year Uighurs were told to hand over their travel documents, helping authorities police their international movements. 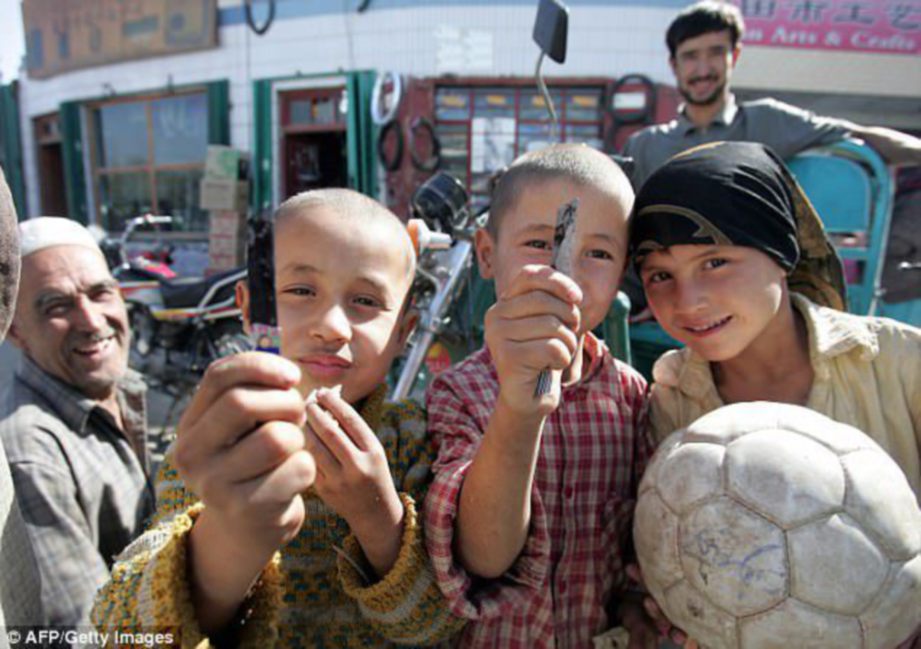