BTC USD 47,359.7 Gold USD 1,752.66
Time now: Jun 1, 12:00 AM
Menu
Log in
Register
Navigation
Install the app
More options
Lights off
Contact us
Close Menu
You are using an out of date browser. It may not display this or other websites correctly.
You should upgrade or use an alternative browser. 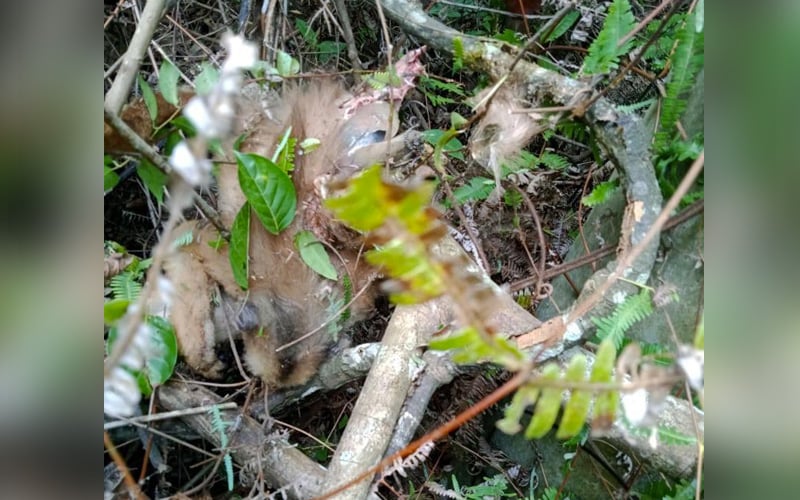 The body of a dusky leaf monkey caught in the trees after the shooting. (Facebook pic)
PETALING JAYA: A suit filed in the Seremban High Court seeking a declaration that the shooting of dusky leaf monkeys in Port Dickson last month was illegal is likely to be Malaysia’s first wildlife court action.

The suit, filed through lawyers Raj & Sach, lists Nurul Azreen Sultan, a resident at Taman Raja Zainal where the culling occurred, as the first plaintiff and Hak Asasi Hidupan Liar Malaysia (HIDUP) as the second.

“This is an important, historic first step, and we don’t think any such action has been taken before,” said Sachpreetraj Singh Sohanpal, one of the plantiff’s lawyers, during an online press conference.

“From a legal perspective, we want everyone to know that this is the law and endangered animals cannot be killed. If this happens again, we have justifiable means to demand further action to be taken against the perpetrators.”

​
On May 19, photos of the incident went viral with claims that officers from the Department of Wildlife and National Parks (Perhilitan) had killed 20 dusky leaf monkeys at Taman Raja Zainal in Port Dickson.

In response to the public outcry, Perhilitan said they only killed seven monkeys which were aggressive and had frequently disturbed residents in the area, adding that the culling only took place after unsuccessful attempts to capture the animals.

The International Union for Conservation of Nature (IUCN), of which Perhilitan is a member, classifies dusky leaf monkeys as an endangered species. Malaysia’s Wildlife Conservation Act 2010 categorises them as a protected species.

Recalling the incident, Nurul said she remains traumatised by the memory of the monkeys writhing in agony after they were shot.

She said Perhilitan told her the monkeys were shot because they had attacked a teacher who had to be admitted to the ICU, but her checks at local hospitals found no such patient.

“Perhilitian should have taken action against these officials but instead, they backed them up. I still remember seeing the baby monkeys that were killed. I can’t accept it,” she said.

Sachpreetraj’s colleague, Rajesh Nagarajan, said the onus was on Perhilitan to bring the alleged victim to court to be cross-examined.