BTC USD 62,051.9 Gold USD 1,770.93
Time now: Jun 1, 12:00 AM
Menu
Log in
Register
Navigation
Install the app
More options
Lights off
Contact us
Close Menu
You are using an out of date browser. It may not display this or other websites correctly.
You should upgrade or use an alternative browser. 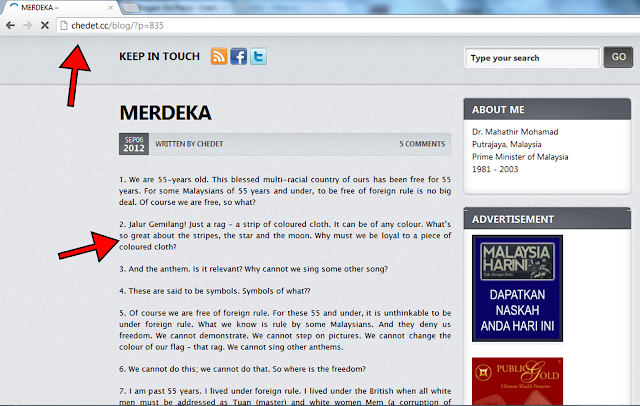 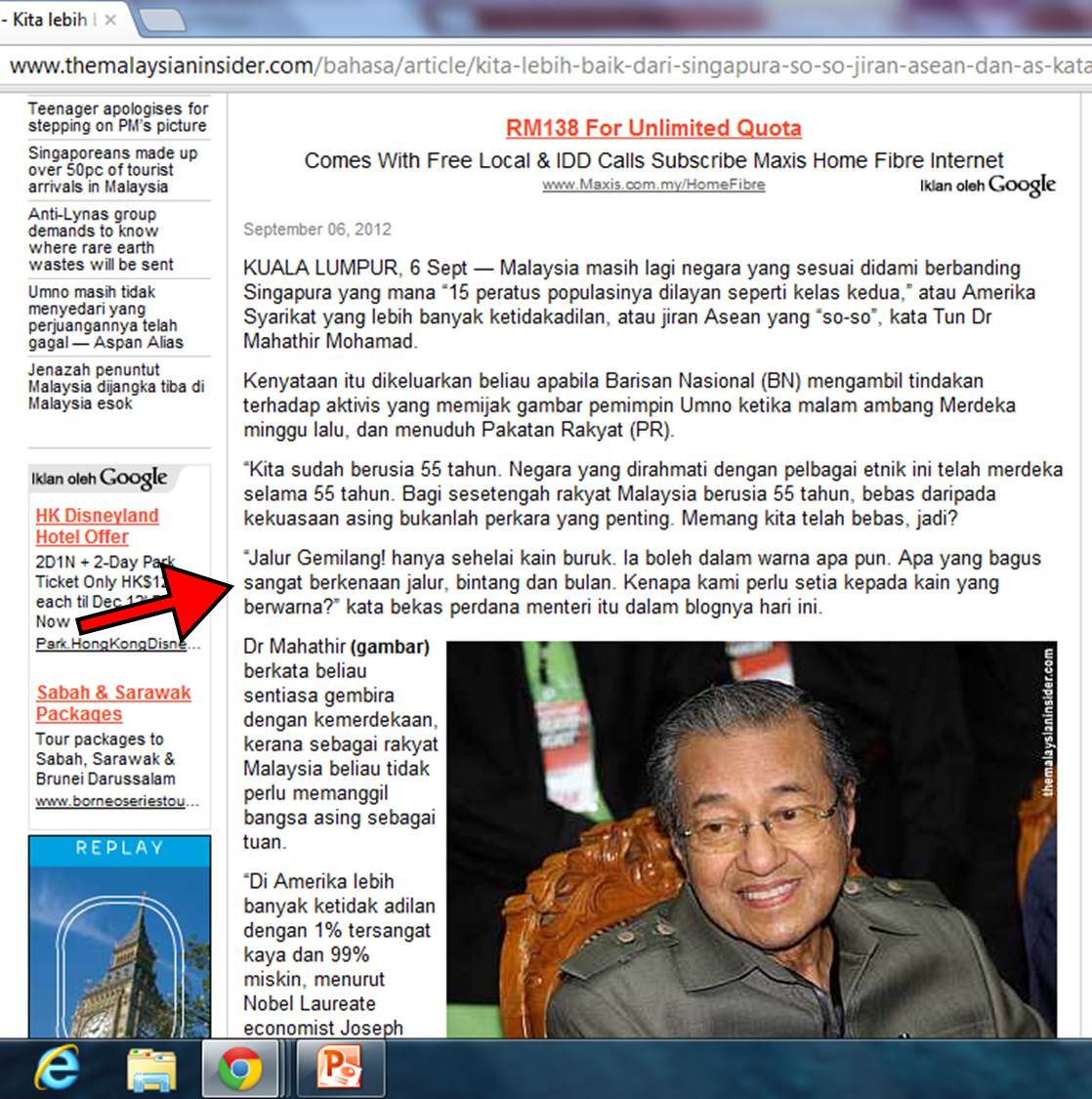 1. We are 55-years old. This blessed multi-racial country of ours has been free for 55 years. For some Malaysians of 55 years and under, to be free of foreign rule is no big deal. Of course we are free, so what?

2. Jalur Gemilang! Just a rag – a strip of coloured cloth. It can be of any colour. What’s so great about the stripes, the star and the moon. Why must we be loyal to a piece of coloured cloth?

3. And the anthem. Is it relevant? Why cannot we sing some other song?


4. These are said to be symbols. Symbols of what??

5. Of course we are free of foreign rule. For these 55 and under, it is unthinkable to be under foreign rule. What we know is rule by some Malaysians. And they deny us freedom. We cannot demonstrate. We cannot step on pictures. We cannot change the colour of our flag – that rag. We cannot sing other anthems.

7. I am past 55 years. I lived under foreign rule. I lived under the British when all white men must be addressed as Tuan (master) and white women Mem (a corruption of Madame I suppose). Ours was to obey, theirs was to command. Politics was out of bounds.

8. I lived under the Japanese. We feared for our women. They had to cut their hair short and wore men’s clothing. They hid in the attic, fearing being raped by Japanese soldiers.

9. The Kampetai or military police had a list of Chinese who had actively supported China against the Japanese. Many were executed by decapitation with the curved Japanese sword.

10. Many were arrested and tortured. Water was hosed into their stomach and then forced out through their mouths and noses. They either died or they confessed to whatever crime they were accused of. Then they were taken out and shot.

11. Thailand allowed the Japanese army to land on its beaches and to march down the Isthmus of Kra into British Malaya. After two months of retreat, the British surrendered.

12. As a reward for their cooperation, the Thais were given four northern Malay state – Kedah, Perlis, Kelantan and Terengganu.

13. I experienced Thai rules. We had to respect their flag and anthem.

14. One evening as I was passing the Alor Star Police Station I heard the anthem and I froze, looking up at the Thai flag being lowered.

15. An old Malay man cycled slowly past apparently unaware that he had to get off his bike and stand at attention.

16. The anthem ended as the flag came down. I heard a shout and a Thai soldier who had been standing at attention ran after the old cyclist. He gave a flying kick to the face and the old man fell off his bicycle, lying still on the road.

17. I did not go to his help. I was afraid of the soldier who seemed about to kick the man again. He changed his mind and went away.

18. The Allied forces won the Pacific War and the British returned. They had promised to defend us from foreign attacks. They had failed. We had to live under the Japanese and the Thais.

19. No apologies were offered. They merely threatened to depose the Malay rulers if they did not sign the MacMichael Treaty surrendering their states outright to the British. In the meantime we were ruled by the British Military Administration. No democracy.

20. Then the worm turned. The docile Malays united as never before and forced the Malayan Union to be aborted. Eventually the states of the Peninsular and then the states of Sarawak and Sabah achieved independence as Malaysia.

22. Yes, our Governments are not perfect. I was expelled from my party. I was ostracised. When I retired I was treated like an enemy of the Government.

23. Others were detained without trial. A few claimed they were tortured. Maybe they were. But that is not the policy of our Governments. The law does not permit that though there are more advanced countries where torture is legalised.

24. There are good things and bad things, good governance and bad governance in independent Malaysia. It is not perfect. But which country is perfect. In America there is much inequality with 1% being extremely rich and 99% poor according to Nobel Laureate economist Joseph Stiglitz. Europe has been in financial crisis since 2008 and appears unable to get out of it.

25. In the Middle East there is the so-called Arab Spring. Many have died. Revolutionary successes have not brought the promised good Governments and prosperity yet. It will take time.

26. Where else? Africa! I don’t think the Africans are better off than Malaysians. Latin America! Yes Brazil. It’s doing well, that’s all I know. The others are not.

27. And in ASEAN. Singapore has done well. But the people seem unhappy. 15% of the population are treated as second class citizens. They are poor. The other countries are so so.

28. Am I ******? But really there is nowhere else I would like to be other than Malaysia. It’s not a perfect country. I don’t like some of the things I see or experience. But on balance there is more good in independent Malaysia than there are bad things.

29. So I will celebrate Merdeka days. I will fly the Jalur Gemilang and I will sing the National Anthem. I am proud I am a Malaysian, a citizen of an independent country. I will not step on the pictures of people who only know how to hate and have done nothing to make this country better. By doing what they did they have demonstrated that they and the people who lead them are unfit to rule this independent country. They only know hate. Hatred does not develop nations.