Seoul, South Korea (CNN) -- North Korea fired artillery toward its tense western sea border with South Korea on Tuesday, killing at least one South Korean soldier, the Yonhap news agency reported.
Two civilians and 13 other South Korean military personnel were injured, with three of the soldiers seriously hurt, Yonhap said.
At least 200 rounds of artillery hit an inhabited South Korean island in the Yellow Sea after the North started firing about 2:30 p.m. local time, Yonhap said.
South Korea's military responded with 80 rounds of artillery and deployed fighter jets to counter the fire, the report said.
The South Korean army also raised its alert condition, the report said.
Images of plumes of smoke were quickly broadcast on Yonhap television from the island of Yeonpyeong, but it was not immediately clear what the artillery had hit.
The island has a total of about 1,300 residents, a fisherman who lives on the island told Yonhap.
Some residents started fleeing for the South Korean mainland, which is about 145 kilometers (90 miles) away. Other residents were seeking shelter at schools.
The South Korean government immediately called an emergency meeting of its security ministers.
The North Korean fire came as the South's military conducted routine drills in waters off the island, which is about 10 kilometers (6 miles) from the North. 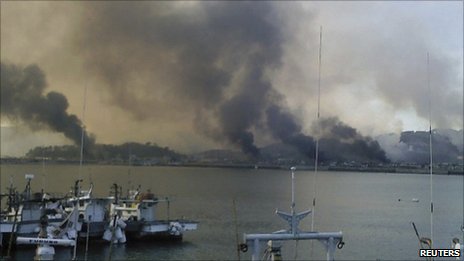