Although some weather relief appears to be en route in the coming days, millions of acres have already burned, particularly in California, Oregon and Washington. Homes and businesses have been engulfed, and injuries to both residents and first responders continue mounting.

Here are the latest updates:

Update 7:09 p.m. EDT Sept. 13: Oregon Gov. Kate Brown confirmed Sunday that dozens of Oregonians remain unaccounted for, especially in Jackson, Lane and Marion counties in the western portion of the state, as wildfires have torched at least 1 million acres statewide.

Oregon’s Office of Emergency Management confirmed the fires have claimed at least 10 lives to date, with four of the 10 resulting from the Beachie Creek Fire in Marion County, CNN reported.

Meanwhile, 40,000 residents have evacuated, and half a million remain under some type of evacuation alert, The Wall Street Journal reported.

The August Complex Fire burning in the Mendocino National Forest accounts for more than one-quarter of the total acreage destroyed to date and as of Sunday was only 28% contained, CNN reported.

Meanwhile, the U.S. Forest Service confirmed Saturday that the North Complex Fire, ravaging the Sierra Nevada range north of Sacramento, has already consumed 258,000 and is responsible for at least 12 deaths, The Wall Street Journal reported.

According to the Journal, an estimated 16,750 firefighters are fighting blazes statewide and at least 42,000 residents remained evacuated Sunday.

Meanwhile, the spread of the Bobcat Fire in the Angeles National Forest prompted new evacuation orders for residents in parts of Arcadia, a community in the foothills about 20 miles northeast of downtown Los Angeles, the Journal reported.

Death toll climbs to 33 in 3 states

The National Interagency Fire Center confirmed Sunday morning that 25 of the blazes currently being battled are in California, 16 are in Washington, 13 are in Oregon and 10 are in Idaho, but fires have also emerged in Alaska, Arizona, Colorado, Nevada, New Mexico, Utah and Wyoming.

“More than 30,000 firefighters and support personnel are assigned to incidents across the country,” the center stated.

The fire has forced evacuations, damaged hundreds of buildings and left at least 12 people dead, including 16-year-old Josiah Williams.


There are 76 crews and 3,229 personnel fighting the multiple fires that are ravaging California.

Update 11:45 a.m. EDT Sept. 13: Rescuers found a soot-covered puppy amid the rubble from wildfires that are ravaging California.

The Butte County Sheriff’s Office found the puppy hiding Friday in what looked like part of an engine on a property in Berry Creek.

The puppy, who has been temporarily named Trooper, had minor burns and was taken to a veterinarian for treatment.

The number of firefighters assigned rose to 2,301, it also was announced at Saturday’s nightly video update on Facebook live, an increase of about 500 from a day earlier.

That was an indication both of the massive challenges posed by the fire as well as the freeing up of the state’s firefighting force as other fires burning in the state moved closer to containment.

Three more people were arrested for running roadblocks in the evacuation

A strong-winds warning has been issued as emergency crews battle to contain nearly 100 wildfires burning in the US states of Oregon, Washington and California.

And President Donald Trump has stoked controversy, ahead of a visit to Oregon, claiming that the solution to the fires is better “forest management”, not tackling climate change.

EYE ON THE DAY:

The Beachie Creek Fire has caused more destruction than most wildfires ever have in the state of Oregon.

With wildfires raging during a pandemic, Oregon residents are pushed to the brink Boats are partially obscured by smoke from a wildfire at a marina on Detroit Lake burned by the Beachie Creek Fire, Saturday, Sept. 12, 2020, in Detroit, Ore. (AP Photo/John Locher) (John Locher/AP) 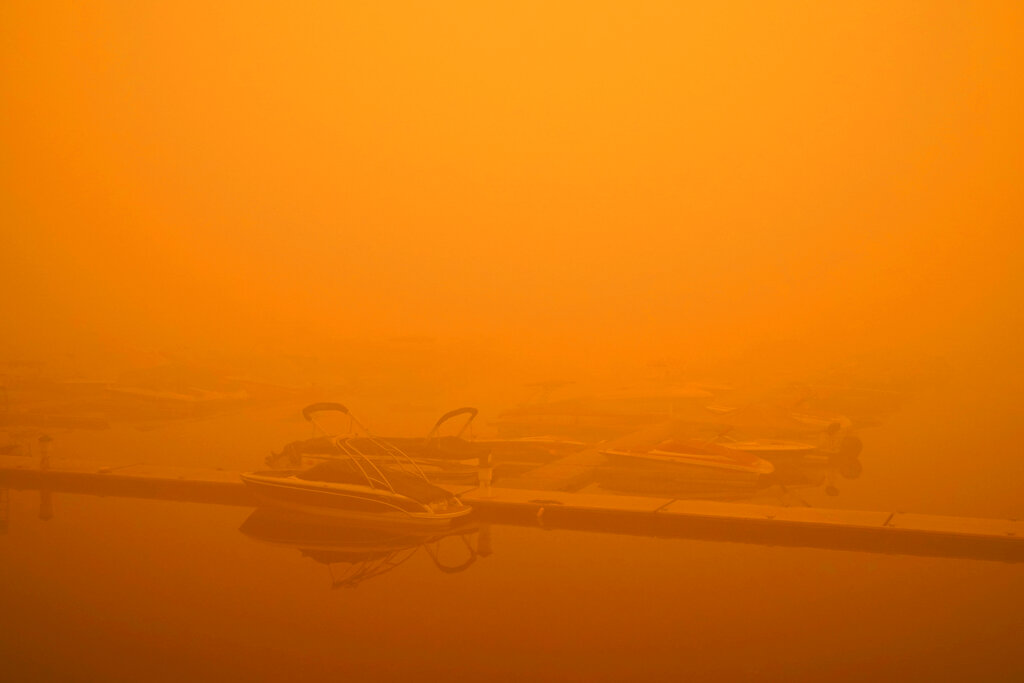 Wildfires continue to burn through the west stretching from Oregon to California leaving behind charred ruins of homes and communities.

President Donald Trump on Monday suggested global warming will reverse itself and dismissed climate change as a cause of ferocious fires engulfing swaths of the US West, during a briefing in California on the deadly blaze