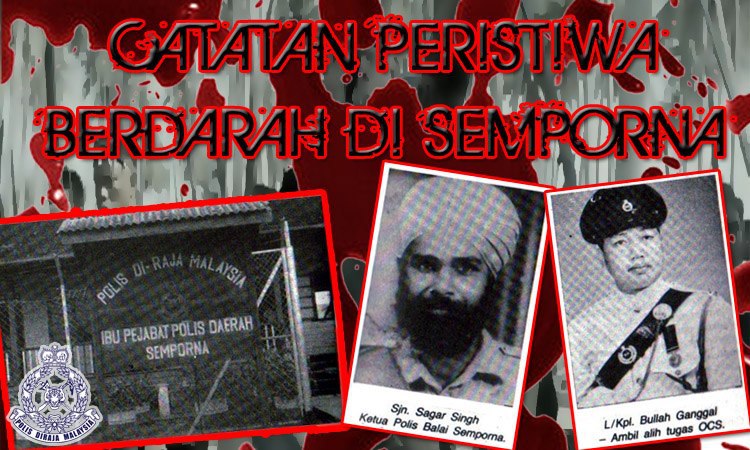 Day, 29 April, 1954, was the most unluckiest day for the people of Semporna, near Lahad Datu in east Malaysia.It was a day most wretchedly remembered for the inhabitants of this smal town, as many sacrificed their lives and property. Some even had their honour violated, and were raped.

The bad memories of that fateful day still remain in the local population, who witnessed the bloody consequences of violent acts by the -mundu mundu (the pirates) who came out of nowhere and attacked the sleepy laid back town. Semporna ,is located on the coast, was always, peaceful and harmonious and very laid back sleepy community.As usual that fateful day, there was an atmosphere of calm and comfort blowing in from the deep blue sea.

The soccer field was located close to Semporna police station had been occupied by the football fans/players alike , as like every other evening. The players had much fun playing footbal on the field. Several policemen were also playing and sweating away, fostering strong relationships with the local community.

Semporna police station located under the Control of Police District (OCPD) Lahad Datu had seven officers staioned there.The Chief of Police Station (OCS) – was a tough and strict looking Sergeant, Sagar Singh. Communication between Semporna police station with their headquarters in Lahad Datu district were only through the wireless radio.The only other route through the sea took about 10 hours.

The bloody events of that fateful are still fresh in the memory of Mr. Bullah Ganggal, a former police officer who recently retired with the rank of Assistant Superintendent of Police (ASP). En.Bullah, a Kadazan by descent, was on duty during the incident at the police station with another officer.

He says “Everything begins at 5.30 pm. At that time the residents of Semporna are resting after returning from fishing. “En.Bullah Ganggal began his story.

“The young men were enjoying playing football. Suddenly the sound of a ceaseless barrage of fire came from the jetty which is not far from the police station and the football field, “he said.
“People in the town and in the field, started running helter skelter, seeking shelter and were shouting mundu! mundu! (Lanun! Pirates!)The people started fleeing seeking shelter here and there.

“Looking at the confusion and surprise pirate attack, Sergeant Sagar Singh immediately ordered his men to get ready. He ordered me to take all the wives and children of the police personnel in the small baracks and take refuge in Semporna police station. The station was more secure because of the barbed-wire fences and all firearms and ammunition were there too. “.

The station was defended ferociously by Sergeant SAGAER SINGH and his fire.However, the pirates destroyed the wireless communications system/devices in place just outside the police station. Thus the communication with the Headquarters at Lahad Datu was lost. Help could not be summoned, nor alerted about the attack on the Semporna Police station.

“We must defend this station to the last drop of blood. Let each bullet hit the target and waste not “said Sagar Singh fearlessly to his men with enthusiasm. They continued to fight bravely, ensuring they maintained a poweful line of fire, despite being outnumbered heavily.

En.Bullah Ganggal assigned to protect the wives and children of the police could not do anything because he had no weapons. If he came out without a weapon, he would be shot at once by the pirates.PC Jambuan run out of ammunition and was stabbed with a machete by the pirates. He was brutally murdered.

Many of the pirates were armed with automatic weapons, Sergeant Sagar Singh and his officers were running out of ammunition, but kept constant barrage of fire at the priates, were eventually were killed. L / Cpl Bullah Ganggal tried to come out of hiding place to provide assistance but was ordered limited by Sarjent Sagar Singh to portect and guard the police families, and not come to their own assistance.

Evenually, the pirates automatic fire hit Sgt Sagar Singh,and he died. His men had already been hit and perished. The pirates then entered the police station. The Police radio room was damaged the equipment destroyed. They also break nto the ammo room and stole firearms and ammunition past.

Pirates remaine dthere commiting brutal crimes. They were shooing their firearms to and fro. They continued to search around the houses and shops in the town.

Holed up in the stilness of the police barracks, I heard the cries and screams for help by victims of the evil pirates. They not only robbed, taking whatever valuables, food, they were also raped women and young girls. They were cruel and torturous. “, says En.Bullah with a feeling of great very exasperation.

I was not armed and was thinking of families and children and the safety. I really regret That I was not able to help my friends who wre killed as grt warriorers.

“The damned pirates remined for 3 hours ie from 5.30 to 8.30 pm in the town of Semporna, committing heinious crimes and sinning against innocent people, which cannot be forgiven, “he explains further.

According En.Bullah, he did not know where the pirates came from, but thinks that they could be from Southern Phillipines due to their accents.

For 3 hours Semporna became a hell hole.. The pirates acted grossly arbitrarily because after the death of the Police officers like Sagar Singh no one dared to resist. Having satisfied their evil intents and desires , they quickly disappeared into the vast ocean with the boats with great haste.