GOLD AND USDX : Daily Signal And Analysis From InstaForex

Technically, after reaching the target of 113% for the "Shark pattern", a natural pullback to the 38.2% Fibonacci correction level followed. Important Pivot levels are also located here. The fact that the "bulls" managed to hold support at $1545-1548 per ounce, the hopes of restoring the upward trend remains. 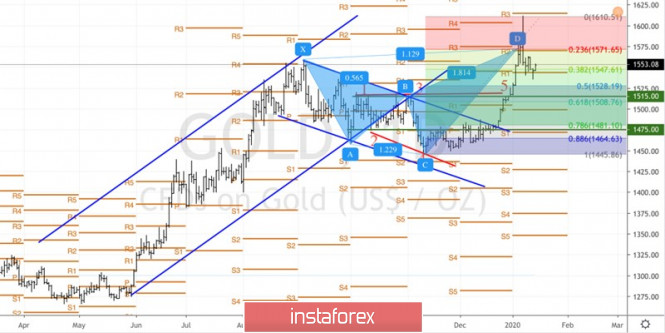 Gold prices were narrowly mixed on Thursday after the United States and China signed a trade truce, helping ease investors' concerns of further escalation in the costly conflict. Spot gold was marginally lower at $1,555.30 per ounce, while U.S. gold futures edged up around 0.1 percent to $1,555.35. The prospect of no further escalation in the economically damaging trade war helped improve investor sentiment somewhat as the U.S. and China finally signed the long-awaited "Phase One" trade deal, with tariffs on hundreds of billions of dollars in imports still in place.

The phase one trade deal calls for China to purchase $200 billion worth of U.S. goods over the next two years, including up to $50 billion worth of agricultural products. In exchange, the U.S. will scrap a new round of tariffs and cut tariffs on approximately $120 billion worth of Chinese goods in half to 7.5 percent. Trump noted a 25 percent tariff on $250 billion worth of Chinese imports will remain in place in order to give the U.S. leverage as the two countries enter into phase two negotiations. The U.S. dollar edged lower on improved sentiment. U.S. Federal Reserve policymakers on Wednesday expressed confidence they have borrowing costs at the right level to sustain growth and lift inflation to healthier levels, despite uncertainty over U.S. trade policy.

Silver futures for March ended down $0.049 at $17.939 an ounce, while Copper futures for March ended lower by $0.0190 at $2.8470 per pound. A report from the Labor Department showed an unexpected decrease in initial jobless claims in the week ended January 11th. The report said initial jobless claims fell to 204,000, a decrease of 10,000 from the previous week's unrevised level of 214,000. The drop came as a surprise to economists, who had expected jobless claims to inch up to 216,000. According to a report from the Commerce Department, retail sales in the U.S. climbed by 0.3% in December, matching the upwardly revised increase in November. Economists had expected retail sales to rise by 0.3% compared to the 0.2% uptick originally reported for the previous month.

The Philadelphia Federal Reserve also released a report showing a substantial acceleration in the pace of growth in regional manufacturing activity in the month of January. On the trade front, the U.S.-China phase one trade deal calls for China to purchase $200 billion worth of U.S. goods over the next two years, including up to $50 billion worth of agricultural products. In exchange, the U.S. will scrap a new round of tariffs and cut tariffs on approximately $120 billion worth of Chinese goods in half to 7.5 percent. Trump noted a 25 percent tariff on $250 billion worth of Chinese imports will remain in place in order to give the U.S. leverage as the two countries enter into phase two negotiations.

Gold prices rose slightly on Friday amid expectations that the formal signing of the Sino-U.S. trade agreement on Wednesday will not resolve core differences. Spot gold edged up 0.25 percent to $1,556.18 per ounce while U.S. gold futures were up 0.4 percent at $1,556.05. Under the Phase 1 deal, which has been criticized for its loopholes, Beijing will increase purchases of the U.S. products and services by an additional $200 billion over the next two years.

Concerns still persist about the ability of China to ful?ll its commitments and the lack of any discussion about current punitive tari?s on U.S. agricultural products. The U.S. dollar held its ground against its rivals after data from the world's largest economy indicated a moderate growth pace at the end of 2019. Elsewhere, a raft of Chinese economic data either met or beat analyst estimates. China's GDP data came in line with expectations and there was growth in industrial output and retail sales, suggesting the world's second-biggest economy ended the year on a firmer note. In the whole year of 2019, China's gross domestic product grew 6.1 percent, which was well within the target of 6-6.5 percent.

The U.S. dollar exhibited strength against most major currencies on Friday, riding on fairly encouraging economic data from China and the U.S. Chinese economy expanded in line with expectations in the fourth quarter. Data released today showed GDP was up 6% year-on-year in the fourth quarter, the same rate as seen in the third quarter. It was in line with expectations as well. The data also showed that industrial production in China rose 6.9% in December, compared to the year-ago quarter.

Retails sales surged up 8% in the month, over the same month in the previous year. According to the data released by the Commerce Department Friday morning, U.S. housing starts skyrocketed by 16.9% to an annual rate of 1.608 million in December after jumping by 2.6% to a revised rate of 1.375 million in November. Economists had expected housing starts to rise by 0.7% to a rate of 1.375 million. Building permits tumbled by 3.9% in December, after climbing 0.9% in November. A report from the University of Michigan showed a slight deterioration in U.S. consumer sentiment in the month of January.

Preliminary data showed the consumer sentiment index edged down to 99.1 in January from the final December reading of 99.3. The Federal Reserve released a report showing a slight pullback in U.S. industrial production in the month of December. The dollar index rose to 97.66, gaining in strength gradually after opening at 97.31. The index was last seen at 97.62, up more than 0.3% from Thursday's close. Against the Euro, the dollar strengthened to $1.1092, from previous close of $1.1135. The dollar was up 0.5% against pound sterling at $1.3012, after trading at $1.3116 in the European session. The dollar was flat against the yen, moving around the unchanged line for much of the trading session. The Aussie, loonie and Swiss franc were all weak against the dollar, at 0.6873, $1.3068 and $0.9678, respectively.

Gold prices were flat to slightly higher on Monday amid geopolitical tensions after more than 100 people were killed and dozens wounded in a missile and drone attack blamed on Houthi militia in central Yemen. Buying ahead of the Chinese New Year also lent some support. Spot gold edged up 0.3 percent to $1,560.58 per ounce, after hitting its highest level since Jan. 10 at $1,562.51 earlier in the session.

U.S. gold futures were virtually unchanged at $1,560.55. The missile attack reportedly targeted a mosque located inside a military training camp during evening prayers on Saturday. Yemen's internationally recognized government condemned the strike as a "cowardly and terrorist" attack, according to the official Saba news agency. Yemeni President Abdu Rabbu Mansour Hadi told the military to be on high alert and ready for battle. He blamed the Iran-backed Houthi rebels for the deadly attack. The dollar held largely flat in European trade amid a holiday in the U.S.

U.S. Dollar Up At Start Of Week

The U.S. dollar appreciated against its major counterparts in the European session on Monday, as strong economic data allayed fears about a slowdown in the U.S. economy. Data on Friday showed that U.S. housing starts jumped 16.9 percent in December to the highest level since 2006. The data came on the heels of solid retail sales for December and Philadelphia Fed manufacturing survey for January. The data reinforced hopes that the U.S. Federal Reserve is unlikely to cut rates when it meets at the end of the month. Investors awaited key risk events including meetings from central banks of Japan, Canada and Europe and the World Economic Forum in Davos due this week. Analysts expect the ECB, the BoJ and the BoC to keep rates unchanged amid easing trade tensions. The currency held steady against its most major counterparts in the previous session.

Producer prices fell 0.2 percent year-on-year, slower than the 0.7 percent decrease seen in November. This was also slower than the 0.3 percent fall economists' had forecast. The U.S. currency hit a 6-day high of 1.2962 against the pound, compared to last week's closing value of 1.3005. The greenback is seen finding resistance around the 1.27 mark. Data from property website Rightmove showed that UK house prices increased the most for the month of January after the general election. House prices increased 2.3 percent in January, the highest since the record started in 2002.

The greenback was trading at 110.19 versus the yen, up from a low of 110.07 hit at 5:00 pm ET. Next key resistance for the greenback is likely seen around the 112.00 level. Data from the Ministry of Economy, Trade and Industry showed that Japan industrial production declined slightly more than initially estimated in November. Industrial production fell by a seasonally adjusted 1.0 percent month-on-month November. According to the initial estimate, production had declined 0.9 percent. The greenback rallied to 0.9694 against the franc, after falling as low as 0.9674 in the previous session. Further rally may take the greenback to a resistance around the 0.99 region. U.S. markets are closed in observance of Martin Luther King Jr. holiday.

Gold prices fell slightly on Tuesday as tensions in the Middle East over the U.S.'s assassination of Iranian commander Qassem Soleimani eased. Spot gold shed 0.35 percent to $1,556.11 after touching their highest since Jan. 8 at $1,568.35. U. S. gold futures were down 0.3 percent at $1,556.25 per ounce. Saudi Arabia has reportedly launched the sale of U.S. dollar denominated bonds with maturities of seven, 12 and 35 years, as part of efforts to plug part of its growing budget deficit. The kingdom plans to issue around $32 billion of external debt over the course of the year.

Gold prices hit a two-week high earlier in the session after the International Monetary Fund (IMF) lowered its global growth estimate for 2020 and China reported fourth death following the outbreak of a new coronavirus. Health authorities around the world stepped up screening and the World Health Organization called a meeting on Wednesday to consider declaring an international health emergency on fears that the disease might spread faster during the Lunar New Year holiday, the Chinese-speaking world's busiest travel season Markets also await developments in the World Economic Forum in Davos as well as the European Central Bank's first policy meeting of the year this week. Earlier today, the Bank of Japan left its key interest rate unchanged at a two-day policy review and revised up its growth forecasts, citing the effects of the fiscal stimulus.

on Tuesday, giving up early gains, as traders weighed the impact of the coronavirus outbreak in China on the demand for the yellow metal. A downward revision on global growth forecast by the International Monetary Fund weighed as well on the commodity. Easing concerns about tensions in the Middle East too contributed to gold's decline. Gold futures for February ended down $2.40, or about 0.2%, at $1,557.90 an ounce.

On Monday, the International Monetary Fund cut the global growth forecasts for this year and next, mainly due to the weaker-than-expected expansion in India.

Global growth for this year is projected at 3.3%, which is 0.1 percentage point less than the forecast made in October, the international lender said in the latest update to its World Economic Outlook report. The growth rate is projected to rise to 3.4% next year, which is 0.2 percentage points less than the October forecast. The growth estimate for 2019 was lowered to 2.9% from 3%. The World Economic Forum in Davos was in focus. Traders were also looking ahead to the European Central Bank's monetary policy meeting.
You must log in or register to reply here.
Share:
Facebook Twitter Reddit Pinterest Tumblr WhatsApp Email Link