As we have already said, there were few macroeconomic publications today. There were no important ones at all. Information was received from the ZEW Institute that the index of moods in the business environment of Germany rose to 26.7, although the forecasts were significantly lower (15.0), the index for assessing current economic conditions in Germany was -9.5 (with the forecast - 13.5), and the index of economic sentiment in the eurozone was 25.6 with a forecast of 5.5.

Thus, it turns out that the current economic conditions are assessed as negative, but investor sentiment is growing, which perhaps means that the business climate is starting to improve in the EU countries.

Although it is too early to draw such conclusions, it is better to look at the indices of business activity and draw conclusions on them.

Meanwhile, the European Central Bank conducted a study according to which the demand for loans from an EU enterprise decreased in the fourth quarter of 2019 for the first time since 2013.

Interest rates in the European Union, of course, remain ultra-low. Banks continue to expect that in 2020 the demand for bank loans will remain stable,

we also believe that one decrease over six full years is not an indicator of decline. However, there is a bad call in itself. If in 2020 the demand for loans begins to fall at such low rates, then the EU economy may begin to suffer even more.

And the central bank will have to further lower the key refinancing rate.

But the demand for housing loans, as well as for consumer loans, continues to increase, which is good for the EU economy.

But since any economy is repelled from the production of goods and services in the first place, corporate loans are, of course, more important.

Meanwhile, Christine Lagarde, the head of the ECB, according to many experts, is preparing to conduct the most ambitious revision of the central bank's strategy since 2003. This process can last about a year, and many landmarks will be revised in accordance with new realities and changes in the world in recent years and even decades.

Most experts are skeptical of the revision of the strategy, as officials have not been able to accelerate inflation over the past ten years, despite the fact that the ECB does not abandon the quantitative stimulus program and uses a policy of ultra-low rates.

Despite the fact that macroeconomic indicators of the eurozone remain rather weak, and business activity indexes in the manufacturing sector, as well as industrial production itself, continue to decline and lose growth, experts do not expect a revision of monetary policy parameters at the next ECB meeting, which will take place this Thursday .

At the same time, a poll was conducted in the United States regarding Donald Trump and his impeachment. About 1,200 Americans over the age of 18 were interviewed over the phone. The error of the study is not more than 3-4%. The main questions asked by the Americans were:

2) Should the Senate sitting include the testimonies of new witnesses? 69% were in favor.

3) 58% of Americans believe the evidence, which indicates that Trump really took advantage of his official position to put pressure on Ukraine.

These are the results that, despite Trump's statements at the international economic forum, which takes place at the same time in Davos, about "America's prosperity as never before," suggests otherwise. As before, a fairly large number of Americans do not support Trump's policies and do not want him to be re-elected for a second term. It remains to wait for the results of the Senate meeting.

The technical picture of the euro/dollar pair implies the resumption of the downward movement. At the moment, the correction has reached the pivot level of 1.1116 and this may end safely.

EUR/USD may resume a downward movement. Thus, it is recommended that you either hold open shorts with targets 1.1060 and 1.1052, or open new ones with new signals (MACD turn down or a rebound from the Kijun-sen line). It will be possible to consider purchases of the euro/dollar pair no earlier than the traders of the Senkou Span B line overcome with the first goal the resistance level of 1.1203.

Explanation of the illustration:

Overview of the EUR/USD pair. February 6. ECB President Christine Lagarde fears the spread of the 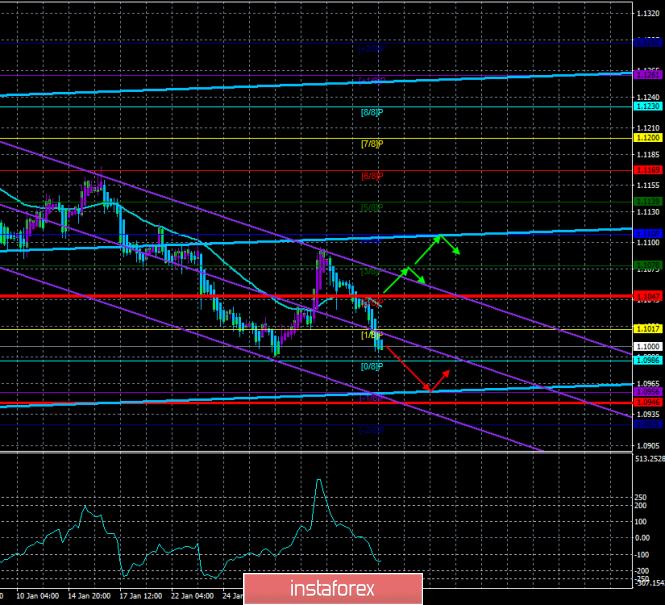 The third trading day of the week for the EUR/USD pair ended with the resumption of the downward movement. The macroeconomic background of the environment contributed to this development since the data from the European Union was not impressive and the data from overseas was very strong.

Thus, it is quite logical that the euro/dollar pair resumed its downward movement, although it may again roll back from the area of lows and start moving up again. The fact is that describing the "paradoxical situation", we regularly say that the bears are simply afraid to continue selling the euro currency at levels below the mark of $1.10.

However, in addition to the simple fear of trading lower, regular rebounds from this area can also be associated with pending purchase orders placed in this area.

Thus, on Thursday, February 6, we can already witness the growth of the euro currency, even if there are no fundamental and macroeconomic reasons for this. However, we still recommend that traders do not try to guess the pair's reversal upward, but wait for the Heiken Ashi indicator to reverse, which will indicate at least an upward correction against the current downward trend.

In yesterday's morning review, we said that Christine Lagarde's speech, scheduled for Wednesday, will most likely not bring any new information to traders. And so it happened. The speech of the ECB head was not related to the monetary policy of the European Union or structural changes in the Central Bank, but, as we assumed, with the "coronavirus".

According to the head of the ECB, the spread of the "coronavirus" on the planet brings a new portion of uncertainty to the world economy. Christine Lagarde said: "The threat of a trade war between the United States and China appears to have diminished, but the coronavirus adds to the uncertainty."

Thus, according to Lagarde, the situation with the epidemic in China partially negates the positive effects of the signing of a trade deal between Beijing and Washington. According to the latest information, the Chinese authorities have suspended the operation of many factories in China, a huge number of firms and companies around the world have limited business trips to China to a minimum.

Part of the staff was transferred to remote work. China's oil consumption has already decreased by 20% since the virus outbreak, air travel has decreased, and China's stock exchanges are experiencing serious problems and collapsing day by day. In fact, this means a slowdown in the Chinese economy.

Is it worth recalling that the Chinese economy is closely tied to the economies of almost all countries of the world and its slowdown will mean a slowdown in the global economy, which will mean a recession in each particular economy, in particular, the European one?

At the same time, economic experts warn that the "coronavirus" outbreak could potentially be more dangerous than the crisis of 2008-2009. According to economists, the decline in mortgage lending was predicted, and no one could warn about the unexpected onset of a new virus pandemic in advance.

Therefore, the authorities of China and other countries were not ready for such a test. "In contrast to the financial crisis, governments responsible for health and the economy may be limited in their means and capabilities to eliminate or compensate for losses from the pandemic," analysts said.

Thursday at 3:40 AM
HFblogNews