Changes to Trading Hours on US President’s Day (February 17)

Please note that due to President’s Day in the US on February 17, 2020, trading hours for some financial instruments will be changed as follows:

Indices
Other indices will be traded without changes.

Please, consider these changes when planning your trading activities on the upcoming week.

Price movements on the EURUSD pair yesterday still form what is known as the inside bar pattern, where the price is still in the previous candle range marked higher and lower high.

Psychologically this condition suggests that there has been a decline in seller pressure, where during the past week the bearish movement has dominated the movement, and at the beginning of the week there has been a bearish pressure.

At this point investors are still skeptical of whether the trend will continue or a reversal pattern. 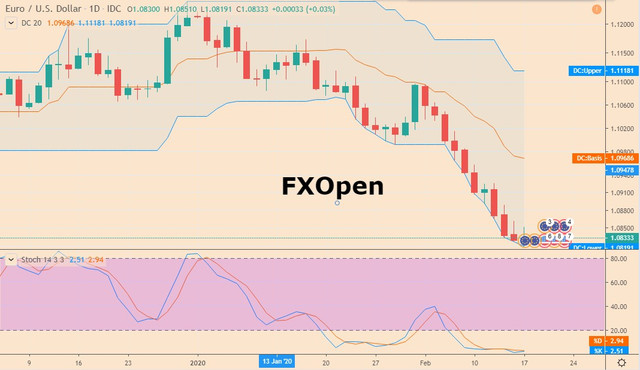 The next possibility is that a low break will occur if the seller pressure is still strong enough for the pair to continue moving down.

The next scenario is that prices will be corrected in this zone, and if the next few days consolidate, a reversal trend may occur.

Based on the stochastic indicators, we see that prices are well below the saturated area, but the trend is still down.

While the donchian channel provided information that there has been high volatility in this EURUSD pair, it is likely that bearish trend is still likely to return.

BTCUSD has rebounded after the previous day there was a decline and broke through the middle line of the Donchian channel.

In this condition the middle channel of the Donchian channel acts as support for this pair.

On the weekly timeframe it is seen that uptrend movements have dominated more since the beginning of this year, it seems that market participants have begun to grow in confidence with the strengthening of the digital currency bitcoin. 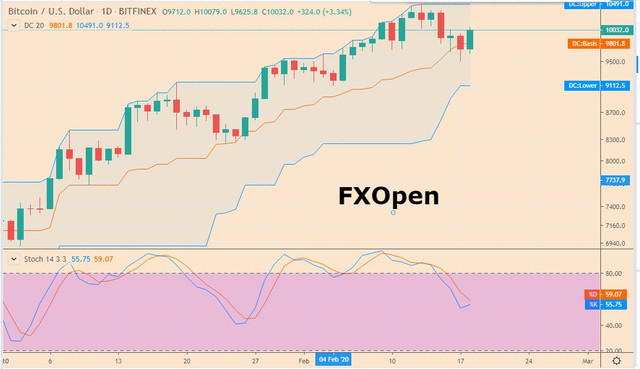 While from H1, it appears that the upward movement is quite strong and has broken the upper channel of the channel channel so that the breakout signal has been reached.

But paying attention to the stochastic, the current price at H1 indicates overbought, so this is a concern to be more aware of the next move.

Aggressive traders may still open long risk-taking, but conservative traders would prefer to wait for the next signal.

But there is a difference in the stochastic signal when looking at the daily timeframe with H1, the daily is not yet in the overbought area so the possibility of the price will continue to rise is also still open.

However, sometimes unexpected events can occur and this is anticipated by using stop losses as part of money management

Price movements in the USDCHF pair during this month are in a bullish tendency, from the monthly timeframe we see that price movements are in a certain range so that they form a parallel candle pattern.

While at the daily timeframe we see that the price is now in the overbought zone if using stochastic as a reference. 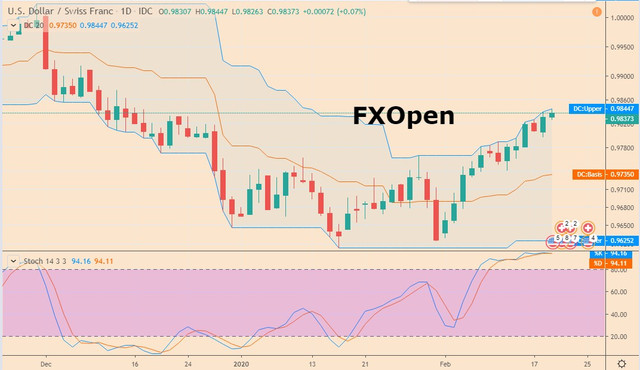 However, the concern is that the resistance zone on the monthly timeframe has not been reached, so there is still a possibility that prices will still rise again.

In addition, market sentiment is emphasizing the strength of CHF, as seen in EURCHF as a comparison.

Meanwhile there are no signs that the SnB will intervene in the currency if the current price is considered too strong.

The key resistance of USDCHF is at the level of 1.03260, and currently the price is still at the level of 0.98361, so even though the stochastic indicator shows overbought, it does not mean that the bullist trend is over

The current price of the BTCUSD is around 9600, with the daily candle pattern inside the bar marked by a smaller candle form than the mother candle.

This means that the market trend has begun to weaken, if previously prices moved down and formed a bears candle, the pressure began to weaken and become an indecision candle 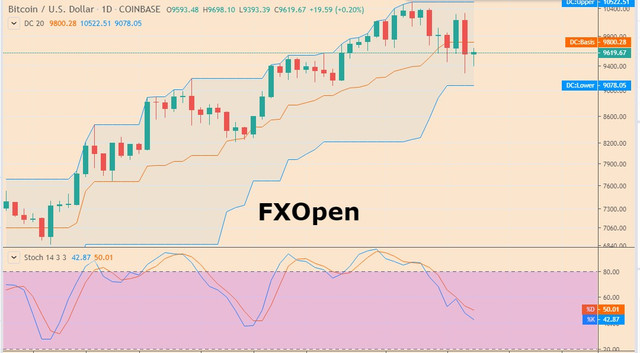 Meanwhile, by looking at the H1 timeframe we see a pattern of candles lined up after a strong decline occurs marked by one long candle which is a bearish candle.

Stochastic on H1 has not shown oversold entry price, but there has been a crossing of the stochastic line as a sign of the current trend tends to rise.

While the Donchian channel on H1 shows that volatility is decreasing where the upper and lower channel lines narrow.

10,400 is the resistance number at the prevailing daily timeframe, and allows prices to move within the daily range.

THE CORONAVIRUS AND ITS IMPACT ON THE FOREX MARKET

Studies have been written covering the correlation with other known diseases from the region – SARS, for instance. But this time, the fact that the virus spread so quickly led to many people wondering if humankind can fight it.

So far, it did. Slowly but surely, Chinese cities come back to life. Fewer fatal cases in China and across the world led to the belief that we can fight this disease with the same weapons as before – trust in each other, hard work, and efficient use of available technology.

The world celebrated the end of the quarantine for the people trapped on the cruiser on the coast of Japan. It symbolizes the trust to contain the virus’s spread and the know-how to find a cure as soon as possible.

However, South Korea reported one death related to the disease. Also, Japan is fighting a slowdown in retail sales and tourist numbers that would impact its declining GDP further. Let us all recall the weak Japanese GDP for the last quarter of 2019 and the quick-declining number in Hong Kong tourist arrivals, and we have a clear picture of what the virus is doing to the region.

The Biggest Losers – AUD and JPY

The Australian Dollar (AUD) was the first to react to the coronavirus’ outbreak. After all, it wasn’t difficult for the markets to anticipate a slowdown in Australian exports to China or Chinese exports to Australia. Both tend to impact trade, and that first impacts the currencies.

It should come as no surprise for fundamental traders using the interest rate differential on the AUDUSD pair. The Fed’s federal funds rate exceeds the RBA’s cash rate, and a higher US dollar makes sense.

But the fact that Asia is facing problem extends more than simply interpreting monetary policy differences. The JPY recent decline tells us that the world is more concerned about the regional impact than the financial markets show.

It is said that a currency reflects the economic strength of a country or region. While the appreciation or depreciation of a currency may come with a certain lag, it always reacts to the business cycle.

Since Trump’s election four years ago, the USDJPY pair only consolidated. The JPY pairs found buyers due to uncertainties related to the US-China trade war or North Korean missiles.

However, this week the pair seemed to have broken higher. There’s no doubt that the coronavirus impact on the Asian economies will first be seen in the regional currencies, and the JPY is one of them.

Tourism dropped dramatically in Hong Kong and Japan. South Korea reports an increased number of cases. Moreover, China continues to keep people at home, extending the holiday period in the areas with a large number of cases to the middle of March.

Eventually, all these factors will influence the regional output. If the rest of the world manages to contain the spread of the virus and the virus remains active in Asia, look for the Asian currencies to decline significantly against the Western counterparts.

A similar move lower we’ve seen in the Australian Dollar (AUD). It literally dropped dramatically against the US Dollar (USD) and the Canadian Dollar (CAD) – two currencies that have a higher interest rate than the Aussie. If we couple this with the exposure of the Australian economy to the coronavirus regions, the AUD is set to decline some more, unless the outbreak is contained.

To sum up, all the worries with the impact the virus has on the global economy reflect the interdependency of the world’s economies. We can’t say anymore that this is a local problem like in the past, as Asia plays a crucial role in global growth.

What is SWAP in forex?

Beginners who have just begun to master or learn about forex, may not be very familiar with SWAP

This video explains about SWAP in forex trading by FXOpen

We would like to advise you that we are consolidating trading in all variations of each Equity Index CFD, into a single version in order to create a more efficient trading environment in these products.

On Saturday 4th April 2020 we are decommissioning the below index products:
On Monday 24th February 2020, the above products will be set to 'close only' trades. We would like clients to move all existing positions and trading to the below mini variants of these products, detailed below.

Please consider these changes when planning your trading activities and ensure you’ve moved your positions by 4th April.

Since yesterday's trading, LTCUSD's crypto assets have been declining for two days, a downward trend has been seen since Monday earlier this week.

Looking at the H1 timeframe, it seems that LTCUSD is concentrating at the bottom level of the Donchian line, there has been a breakout before, and further decline is still quite open. 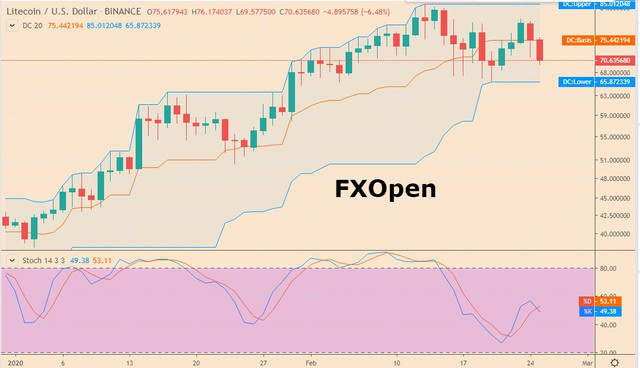 However, what needs to be watched is that at the H1 timeframe, the stochastic indicator has shown the price is in an oversold area, so that in this zone the price will first consolidate.

It is expected that further decline may reach 65,872 support levels with 85,014 resistance levels.

At the daily timeframe the stochastic indicator has shown a crossing of a line which is a bearish signal, which allows that further decline can occur

FXOpen is launching "CryptoMania" - a new contest for demo accounts. Anyone can join the competition to test their ability in crypto trading. "CryptoMania" is a unique opportunity not only to gain invaluable trading experience, but also win a prize fund of 3,000 USD. Free participation. Start: March 9, 2020. Registration is open until 22nd March.