After yesterday's stockpiles data, the price of Crude Oil has managed to get to the important technical resistance at the level of $47.30. This level is just above the 50%Fibo retracements of the last swing down which makes this zone even more interesting. The market conditions look overbought, but the momentum indicator points to the upside, so as long as the level of $46.88 holds, there is still a chance for a breakout towards the next Fibonacci level at $48.19. 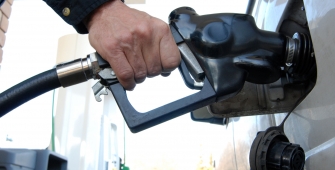 Oil prices were trading flat ahead of an important convention of major oil exporting nations next week, hovering below the $50 per barrel mark that was briefly hit for the first time in 6 weeks in the preceding session.

International benchmark Brent crude futures traded down 1 cent at $49.29 per barrel, while U.S. WTI crude futures stood at $46.91 per barrel, falling by also 1 cent. In the previous trading session, both benchmarks climbed to their peak levels since early June, bolstered by data showing a huge drawdown in U.S. crude and fuel stockpiles. According to ANZ, the effect of the solid decline in inventories reported earlier this week was still lingering in the market. Despite the decline, U.S. oil inventories continue to to be significantly above the five-year average, while U.S. production has risen by around 12 percent since mid-2016 to 9.4 million bpd.

The brimming global supplies has put pressure on oil prices and top members of OPEC are slated to meet non-members in Russia on monday regarding a deal they had made last year to lower production.

On the final day of the August contract, WTI oil was down 33 cents, or 0.7%, to settle at $46.79/bbl. Meanwhile, London's Brent crude oil briefly passed the $50 threshold. A report released by the Labor Department on Thursday showed a much bigger than expected decrease in first-time claims for U.S. unemployment benefits in the week ended July 15th.

Initial jobless claims fell to 233,000, a decrease of 15,000 from the previous week's revised level of 248,000. Philadelphia-area manufacturing activity grew at a notably slower rate in the month of July, according to a report released by the Federal Reserve Bank of Philadelphia on Thursday. The Philly Fed said its index for current manufacturing activity in the region slumped to 19.5 in July from 27.6 in June.

Oil Edges Up Ahead of OPEC Convention 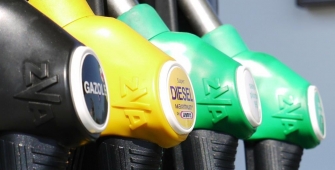 Oil prices gained ground following a steep decline in the session before, bolstered by bets that a joint meeting of OPEC and non-OPEC members later today may tackle the increasing output by Nigeria and Libya, two members of the cartel that has been excluded from an initiative to lower production.

London Brent crude edged up by 24 cents at $48.30 per barrel. The crude contract finished down $1.24 or 2.5 percent down after a consultancy said it expected an increase in OPEC production this month despite the pact to curb output.

NYMEX crude futures rose 17 cents at $45.94. Energy ministers from OPEC and other non-OPEC crude producers will meet in St. Petersburg to talk about the deal to lower oil output by 1.8 million bpd until the end of March 2018.

The committee is seen to suggest a conditional limit on Nigeria and Libya's oil production, according to sources privy to the matter.

However, output cuts by Libya and Nigeria would be almost unlikely given that Libya has just begun to bolster production in the aftermath of the civil war. 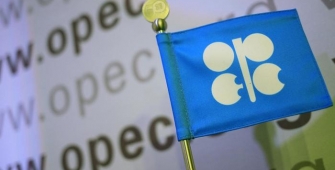 Crude prices continued to advance after OPEC made a move to limit Nigerian oil production and Saudi Arabia promised to restrict exports next month to help curb global oversupply.

OPEC member Nigeria has been excluded from the group's dead with non-OPEC oil producers led by Russia to reduce output by a total of 1.8 million bpd from January 2017 to March 2018.

On Monday, OPEC reached a consensus that Nigeria would participate the agreement by limiting or even reducing its production from 1.8 million bpd, once it steadies at that level from the recent level of 1.7 million bpd.

Oil was also backed by comments from Saudi Energy Minister Khalid al-Falih, who said the his nation would put a ceiling level on crude oil exports at 6.6 million barrels per day in August, almost 1 million bpd below levels a year ago.

Crude oil prices have bounced slightly after the OPEC meeting finished, but none of the important levels were violated. The main technical resistance at the level of $47.53 - $47.30 is still active and without a break higher bulls will not take back the control over this market. The next technical support is seen at $45.39, but the more important one is at the level of $45.00.

After OPEC stopped paying attention to other people's drawn straws and admitted their respective faults, oil prices resumed growth. According to the Petro-Logistic research, the cartel increased its production of black gold to 33 million b/ d, which is 145, 000 b /d more than in June. Obviously, the root of all problems should be sought not in the U.S. States with their shale, but within the group of participants in the Vienna agreement.

In this regard, the pressure on individual countries by Russia and Saudi Arabia can produce results. However, there are risks of getting discontent from the agreement, which will be an unpleasant surprise for the "bulls" for Brent and WTI.

Representatives of Riyadh during the St. Petersburg summit noted that reducing production is not a universal fix. OPEC continues to supply oil to the world market in almost the same volumes, as some countries have retained or are increasing the scale of exports. Thus, the production of black gold by the cartel in October-June decreased by 920 thousand b/d, while shipments abroad - fell only by 120 thousand b/d. As a result, despite the global reserves declining by 90 million barrels, their total number is still 250 million barrels higher than the five-year average of the indicator for the current time of the year. In order to set an example, Saudi Arabia is ready to reduce its exports from 6.9 million b/d in May to 6.6 million b/d in August.

The recent figure is 1 million b/d less than last year's monthly maximum. Moscow believes that the source of destabilization in the market are Nigeria and Libya, which should take an active part in the deal to reduce production. If the cartel can solve its internal problems, normalize production and export of black gold, then against the background of growing global demand, the probability of restoring the "bullish" trend for Brent and WTI will increase. In particular, according to studies by the International Energy Agency, global demand for oil from processing companies in August will reach a peak of 81.4 million barrels.

At the beginning of the car season in the US.. in May, it was around 80.1 million barrels. U.S. refineries will process a record 17.5 million barrels, which is higher than during same periods in 2015-2016.

The dynamics of demand for oil from US refineries 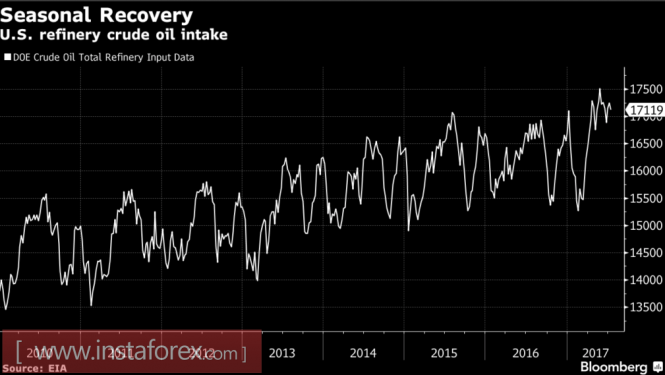 Positive for the "bulls" for black gold news came from China. In January-June, the Celestial Empire imported 212 million tons of oil, or 8.55 million b/d, which is 14% higher than in the previous year. According to the analysis of Sinopec, by the end of 2017, the import will exceed the level of 400 million tons. Simultaneously, Barclays frightens the "bears" with a view with a forecast of an increase in prices by $ 5-7 per barrel as a result of interruptions with supplies from Venezuela. Technically, to restore the upward trend for the Brent "bulls", a successful resistance break is required at $ 50.1 per barrel. 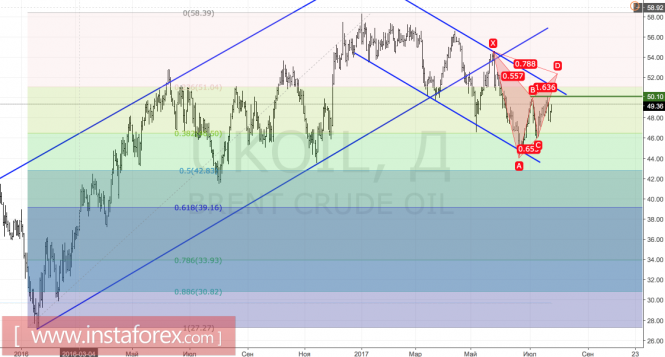 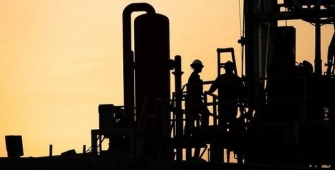 Oil prices edged up, adding up to the recent rally to hover near eight-week highs in the prior session on bets of a drawdown in U.S. inventories and as an increase in shale oil production shows signs of slowing.

Brent crude futures rose 0.6 percent to $50.52 per barrel after advancing over 3 percent.

Crude inventories declined by 10.2 million barrels in the latest week ending July 21 to 487 million, significantly better than the expected decline of 2.6 million barrels.

Sentiment in the market has been lifted by Saudi Arabia's announcement at an OPEC and non-OPEc meeting that will reduce exports to 6.6 million bpd in August, almost 1 million bpd from a year prior.

Nigeria has also agreed to participate in the deal by limiting or reducing its production from 1.8 million bpd once it consolidates at that level.

The price of Crude Oil spiked up above $48.00 level after the latest American Petroleum Institute (API) inventory data for the week ending July 21st, which recorded a draw of 10.23 million barrels. In the result., the price has broken above the technical resistance zone and touched the 61%Fibo at the level of $48.19, with a high at the level of $48.65. Currently, the market conditions are starting to look overbought, but there is no visible divergence yet. The level of $47.53 will act as a technical support now.