The central bank has said it intends to raise rates once more this year and three times in 2018, but analysts now regard this as too ambitious. The Labor Department said its consumer price index was flat in June after edging down by 0.1 percent in May. Economists had expected consumer prices to inch up by 0.1 percent.

Paul Ashworth, Chief U.S. Economist at Capital Economics, said, "Earlier this week, Chair Janet Yellen reiterated that the Fed would be watching the incoming inflation data particularly closely over the coming months." "On the basis of June's data, it is getting harder for the Fed to continue claiming that this is a temporary drop off," he added.

U.S. retail sales unexpectedly decreased for the second consecutive month in June. The Commerce Department said retail sales fell by 0.2 percent in June after edging down by a revised 0.1 percent in May. Meanwhile, signs are starting to point to a drop in U.S. production after furious output in the first half of the year.

Weekly data showed U.S. inventories tumbled the most in ten months as refinery activity picked up. August West Texas Intermediate crude rose 46 cents, or 1%, to settle at $46.54 a barrel on the New York Mercantile Exchange for the session. Prices surged more than 5% this week.
T

Oil Strengthens on Indications of U.S. Output Slow Down 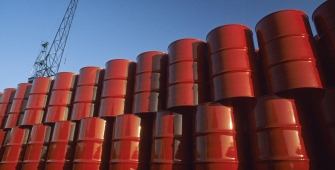 Crude prices firmed, lifted by a slowdown in addition of new rigs in the U.S. and a prospect for strong demand. Brent crude futures traded at $49.08 per barrel, rising by 17 cents or 0.35 percent from their last close.

Meanwhile, U.S. WTI crude futures traded at $46.70 per barrel, up 16 cents or 0.34 percent. Both benchmarks continued their gains from their solid performance in the previous week.

Oil market participants said the increasing prices were due to strong demand as well as indications that a steady increase in U.S. oil production was beginning to slow down its pace. ANZ bank said that last week's solid drawdown of U.S. oil stockpiles was supported by remarks from IEA that demand is stronger compared to their initial estimates.

Another factor was that the relentless increase in drill rigs in the U.S. also eased. U.S. drillers added two oil rigs in the previous week, putting the total number at 765, according to energy services firm Baker Hughes, its highest level since April 2015. Despite this, the rate of the addition in the latest week is slower on average. 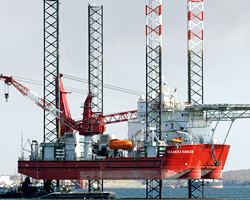 Crude oil futures continued to inch higher Monday morning amid signs of strong demand from China. China's economy expanded at a steady pace in the second quarter on domestic spending and exports despite measures taken to rein in financial risks.

Gross domestic product grew 6.9 percent year-on-year, the same pace of expansion as seen in the first quarter, the National Bureau of Statistics said Monday. The annual growth was forecast to slow to 6.8 percent.

Crude oil extended recent gains despite Friday's report from Baker Hughes data showing the number of active U.S. rigs drilling for oil edged higher by two to 765 rigs this week. WTI light sweet oil was up 8 cents at $46.55 a barrel, staying well away from June's yearly lows near $42.

Among the few economic reports on tap, the New York Federal Reserve's Empire State Manufacturing Survey for July will be released at 8:30 a.m. Eastern Time today. 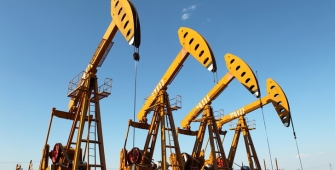 Oil prices were stable, helped by solid consumption but pressured by the still elevated supplies from OPEC members and also the U.S. The international benchmark for crude prices, the Brent crude futures, traded at $48.55 per barrel, up 13 cents or 0.3 percent from their last settlement.

Meanwhile, U.S. WTI crude futures traded up 10 cents or 0.2 percent from their last close at $46.12 per barrel. In an indication of solid demand, Chinese data showed refineries had an increase in crude throughput in June, marking the second highest level on record. Despite signs of strong appetite for oil, markets have been weighed down by oversupply since 2014, causing prices to fall by over 50 percent since then.

A deal by OPEC, joined by other crude producing nations to lower output by around 1.8 million bpd between January 2017 and March 2018 has not resulted in a tighter market and higher oil prices so far, something that producers had hoped.

This is because output from OPEC members continue to be high due to the increasing production from Nigeria and Libya, two members of the cartel who were expected from the deal, and rising U.S. production.

The price of Crude Oil is currently trading at the level of $45.85, which is a technical support for bulls.

Due to the overbought market conditions, there is a possibility of a further slide towards the next technical support at the level of $45.00, which is quite close to the golden trend line support as well.

Crude oil futures rose Tuesday despite signs that OPEC is struggling to maintain cooperation with its supply quota plan.

Ecuador will no longer comply with an agreed OPEC production cut due to the country's financial difficulties, it was announced last night. "There's a need for funds for the fiscal treasury, hence we've taken the decision to gradually increase output," Oil Minister Carlos Perez said. "What Ecuador does or doesn't do has no major impact on OPEC output." It is expected that other struggling nations will take a similar stance against Saudi Arabia and other OPEC cousins.

Traders will be paying close attention to U.S. inventories data over the next few sessions. Stockpiles have dropped from record highs but analysts refinery demand may have dwindled last week.

WTI light sweet crude oil jumped 70 cents to $46.74 a barrel, the highest in three weeks. Strong demand from China fueled today's advance. In economic news, the ZEW research institute's monthly economic sentiment index for Germany fell to 17.5 from 18.6 in June, while U.K. consumer price inflation slowed to a three-month low of 2.6 percent in June, helping ease pressure on the Bank of England to raise interest rates.

Crude prices edged down after a reported increase in U.S. fuel stockpiles and still elevated inventories from producer cartel OPEC reawakened worries regarding a supply glut in the global market.

Meanwhile, supplies from members of the crude exporting group OPEC continued to be high, mainly due to increasing production for member-countries Nigeria and Libya, despite the carter's initiative to slash output.

BNP also noted that it is very unlikely that both countries, which have been exempted from the deal to lower production, will concede to a production cap just when they have restored crude production operations.

In the past few weeks, the oil market has clearly become dull, looking at the tug-of-war between OPEC and US oil producers. It needed a new driver to get out of a tired state, and news from the International Energy Agency and from China could stir "bulls" for Brent and WTI.

China announced a 5.1% year on year decline in domestic production and a 14% rise in imports, while the IEA raised forecasts for global demand by 100,000 in 2017-2018 (1.4 million b/d). At the same time, the decline in US stocks, by 7.56 million barrels in the week ended July 7, has reminded investors of the summer which is the height of the driving season and strong domestic demand.

A moderate optimism prevailed in the market. Increasingly, there is talk claiming that the trading range of $40-50 per barrel is sustainable and that when approaching its lower border, "bulls" are actively buying. A number of companies believe that the worst is over, however, a V-shaped recovery still isn't expected.

Prices are quite capable of staying in the bottom for a long time. Moreover, the shale mining of oil in the US in August will likely grow for the eighth straight month, reaching 5.585 million b/d, and Ecuador, which is involved in the OPEC deal, begins to put its personal interests above that of others. It is not enough for Libya and Nigeria, whose activities has forced the cartel to reduce the rate of fulfillment of obligation to lower production from 90-95% to 78% in June.

According to sources cited by Bloomberg who are familiar with the actual data, the production of oil in the 11-members bound by OPEC's output cut agreement in June increased from 29.69 to 29.89 million b/d. A clear "bearish" signal for the Brent and WTI, which is pressured by talks in St. Petersburg, during which the Monitoring Board will draw conclusions about the activities of individual members of the cartel.

"Bulls" are counting on a further decline in US stocks. According to the forecasts of Bloomberg experts, in the week ended June 14, the index will be at 3.6 million bpd, which will add to optimism on domestic demand. Speculators rely on this factor, as shown by the increase in net longs for WTI of 19% to 178,654 futures and options contracts, which is the fastest trend in the last 7 weeks. Net long positions in Brent at the end of the five-day period ended July 11 also increased, reaching 232,135.

The dynamics of speculative positions and oil prices 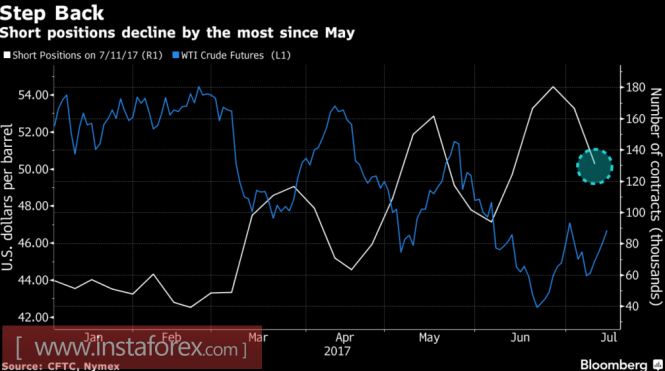 Support for oil comes from the weakening US dollar. The loss of investor confidence in Donald Trump, weak data on inflation and retail sales and falling likelihood of a hike in the federal funds rate in 2017 made the US currency a clear outsider.

If not for this then oil would have it hard. Technically, a breakthrough resistance at $49.3 per barrel will increase the risk of activating a reversed Gartley pattern with a target of 78.6%. It corresponds to the level of $52.4. To begin with, "bulls" need to succeed in levels of $50 and $51 per barrel. 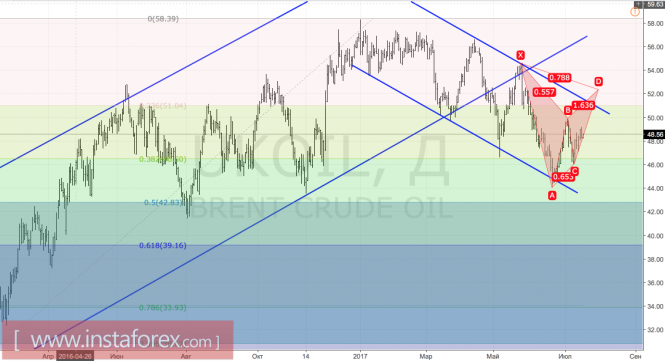 Today at 12:26 AM
nasirngah
N
Top
Log in Register