No police officers or passers-by were hurt, the Paris police department said. It is unclear why the attacker drove into police, though officials said the incident was apparently deliberate.

Interior Minister Gerard Collomb said the man was killed after an attempted attack on a police convoy, saying that shows the threat is still very high in the country and justifies a state of emergency in place since 2015. He said he will present a bill Wednesday at a Cabinet meeting to extend the state of emergency from July 15, its current expiration date, until Nov. 1.

He says the current situation in France shows a new security law "is needed" and the measure would "maintain a high security level." 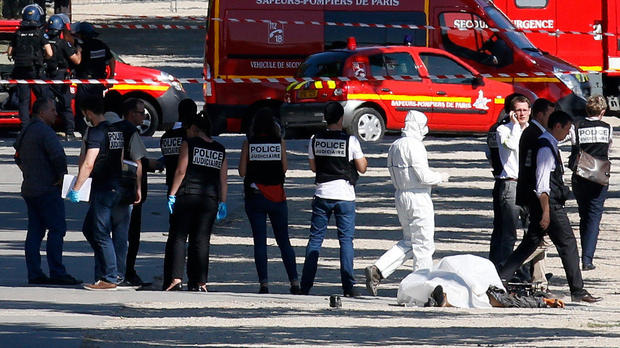 Police inspect the body of a suspect at the scene of an incident in which a car rammed a gendarmerie van on the Champs-Elysees in Paris, France, June 19, 2017.
Reuters/Gonzalo Fuentes

Cellphone video from a witness, Eugenio Morcillo, showed the car exploding into cloud of orange flames after slamming into the van.

Two police officials told The Associated Press that a handgun was found on the driver, who they said was badly burned after the vehicle exploded. They identified the man as a 31-year-old man from the Paris suburb of Argenteuil who had an "S'' file, meaning he was flagged for links to extremism.

The officials spoke on condition of anonymity to reveal details of the incident, the second this year on the city's most famous avenue, which is popular with tourists from around the world.

An attacker defending the Islamic State of Iraq and Syria, or ISIS, fatally shot a police officer on the Champs-Elysees in April, days before a presidential election, prompting an extensive security operation.

On Monday, police cordoned off a broad swath of the Champs-Elysees after the latest incident, warning people to avoid the area.

Police "pulled an individual out of the vehicle who had struck the car in front (of the convoy," Brandet told reporters. "Large numbers of police converged on the scene, firefighters to extinguish the fire."

A man could be seen lying on his stomach on the ground immediately after the incident, wearing a white shirt and dark shorts. 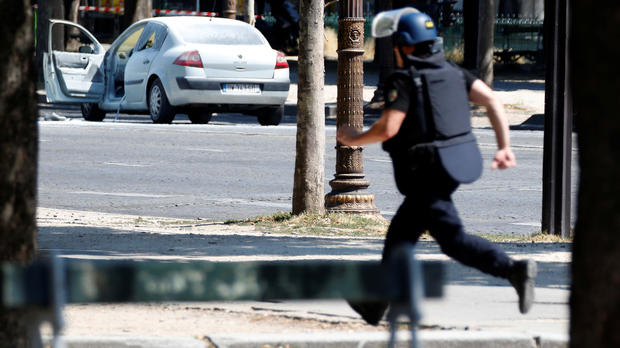 A French gendarme runs past a car on the Champs-Elysees after an incident in Paris, France, June 19, 2017.
Reuters/Charles Platiau

Eric Favereau, a journalist for Liberation newspaper who was driving a scooter behind the gendarmes, said he saw a car blocking the convoy's path, then an implosion in the vehicle. Favereau wrote that the gendarmes smashed open the windows of the car while it was in flames and dragged out its occupant. Other gendarmes used fire extinguishers to put out the flames. The account didn't say what happened to the occupant of the car afterward.

Visitors to a nearby Auguste Rodin exhibit were confined inside the Grand Palais exhibit hall for an hour after the incident.

Victoria Boucher and daughter Chrystel came in from the suburb of Cergy-Pontoise for a Paris visit and weren't afraid to go to the famed avenue.

"We were better off inside than outside," Chrystel said. But both agreed as the mother said, "unfortunately we now are used to this."

"The show must go on," the daughter said in English. "They won't win."

A man has died after ramming a car carrying weapons and explosives into a police van as it drove down Paris' Champs Elysees, officials say.

Interior Minister Gerard Collomb said the man was killed after an attack on a police convoy.

Two police officials said a handgun was found on the driver, who they said was badly burned after the vehicle exploded.

They identified the man as a 31-year-old from the Paris suburb of Argenteuil who had an "S'' file, meaning he was flagged for links to extremism.

Mr Collomb said the man's car was carrying weapons and explosives that could have caused a blast.

"This once again shows that the threat level in France is extremely high," Mr Collomb said not far from the scene.

Police cordoned off a large part of the Champs-Elysees after the incident, warning people to avoid the area.

A man could be seen lying on his stomach on the ground immediately after the incident, wearing a white shirt and dark shorts.

What was the yellow smoke?

One expert told the ABC the yellow gas pictured billowing from the vehicle was characteristic of an incomplete ammonium nitrate explosion producing yellow NOx gases.

Ammonia nitrate is an explosive used in the mining industry, and can also be used to make homemade explosives by mixing it with diesel fuel, Dr Rohan Stanger, a NOx expert from The University of Newcastle said.

The attack on the Champs Elysees occurred amid heightened concerns over vehicles being used as weapons of terror.

It came on the heels of another attack in London where a man drove a van into a crowd near the Finsbury Park mosque, killing at least one person.

Photo: The Champs Elysees was blocked for hours while police combed the area. (AP: Matthieu Alexandre)

The Paris prosecutor's counterterrorism unit said an investigation had been opened into the incident, which happened only a short walk from the Elysee presidential palace and the US embassy.

A police source also told reporters that the man was known to security services.

No police officers or passers-by were hurt, the Paris police department said.

France has been on high security alert following a series of militant Islamist attacks in recent years, including the shooting of a policeman in an Islamic State-claimed attack on a police bus on the Champs Elysees in April.

President Emmanuel Macron said last month his Government would ask parliament to extend wider search and arrest powers granted under a state of emergency called after Islamist gunmen and suicide bombers killed 130 people in and around Paris in November 2015.

Some magistrates and human rights groups have protested in recent weeks against the proposal that would enshrine in ordinary law measures currently in place under the state of emergency.

Photo: French police examine the car used to ram a police van on the Champs Elysees while filled with explosives. (ABC News)

THIS is the shocking moment a known terror sympathiser is dragged from his car filled with smoking explosives and weapons after smashing into a police convoy in Paris.

The suspect, 31, died in the apparent terror attack on the tourist-packed Champs-Elysees. 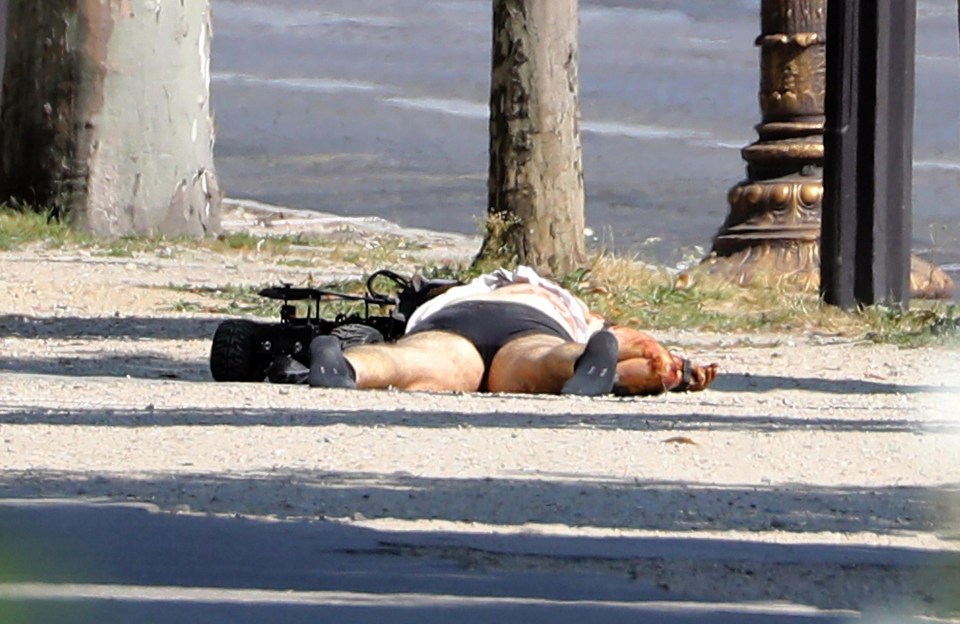 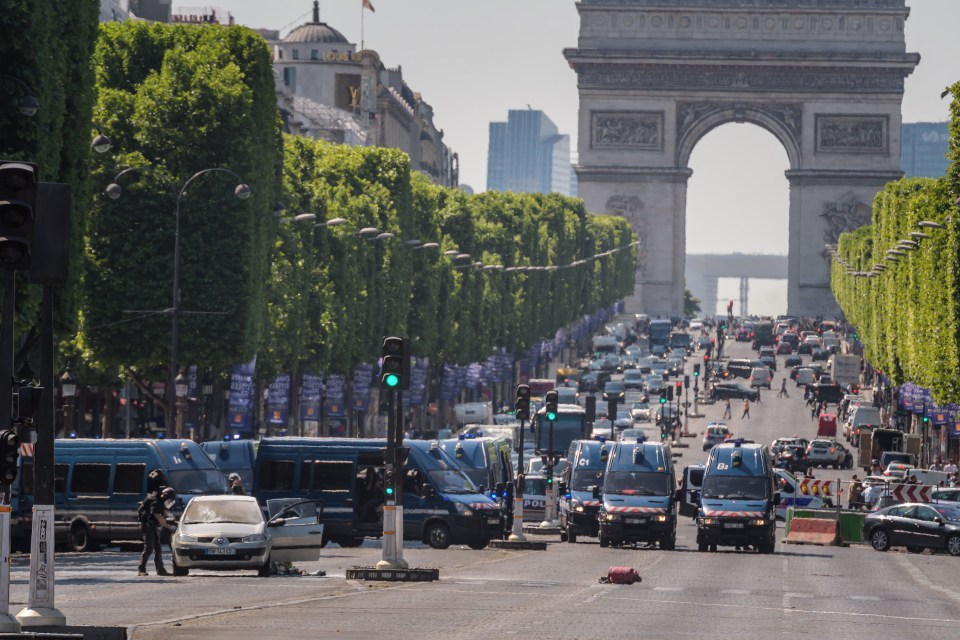 Miraculously no one else was injured during the panic on Monday evening.

The “radicalised” attacker was later pictured being stripped naked by bomb squad officers.

The Renault Megane was seen targeting a line of police vans that were travelling up the Champs-Elysee towards the Arc de Trimophe. 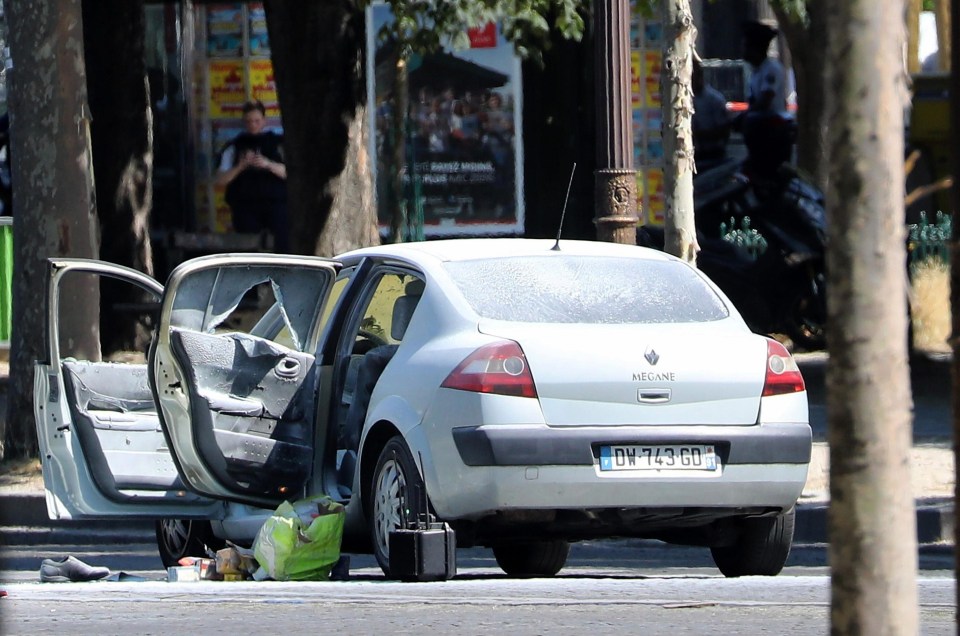 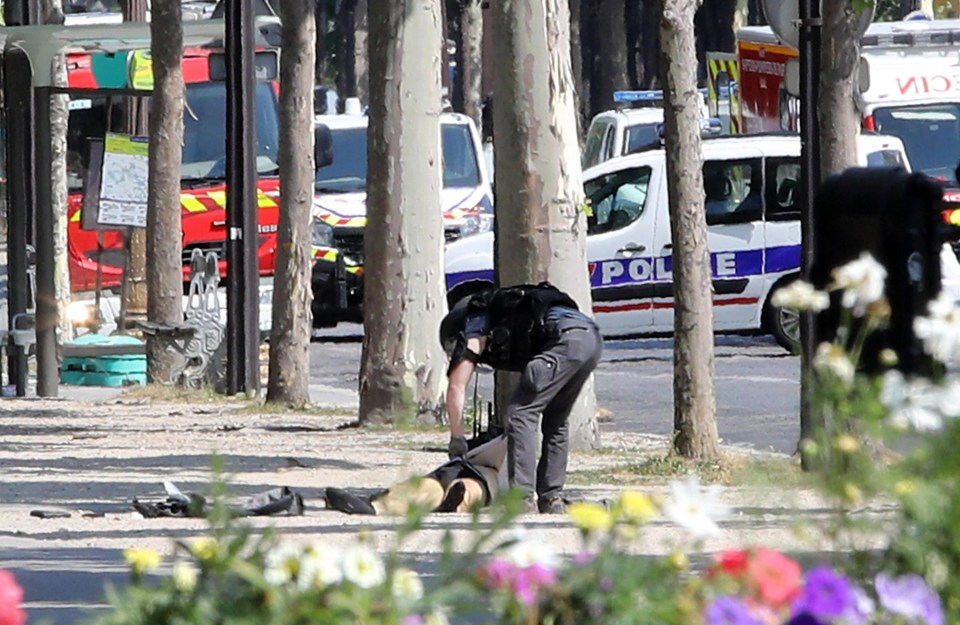 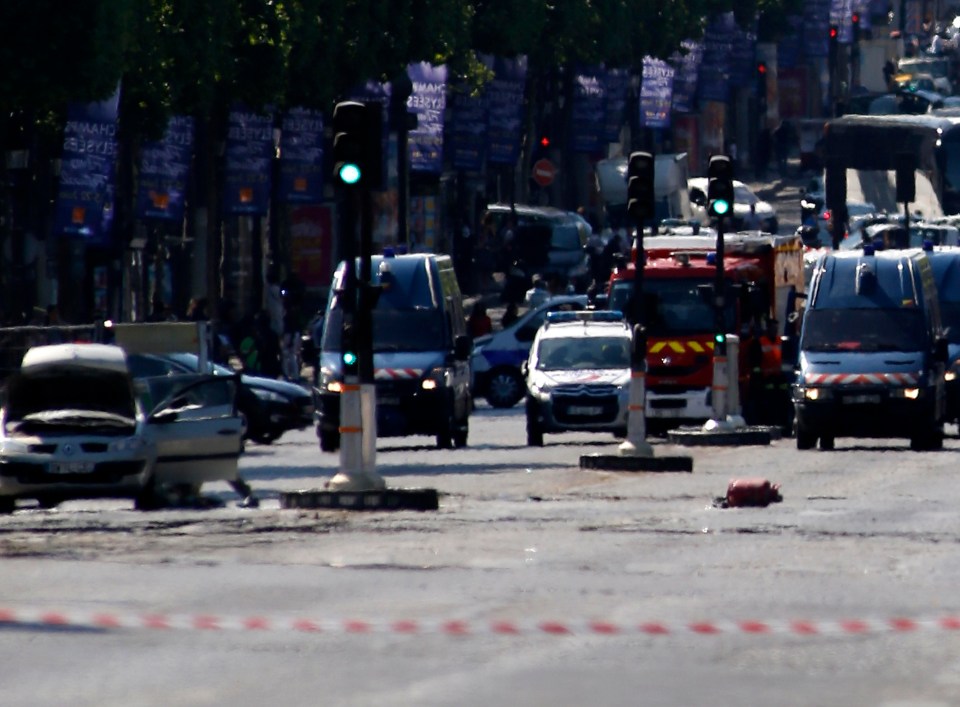 Witnesses said the suspect’s car “exploded” on impact with the van and that the driver, who has not been named.

An investigating source said: “There was a sudden impact, and then a fireball. A gas bomb was in the car.

“The man was very badly injured, and then pulled out of his damaged vehicle.

“He did not cause any injuries, but the collision was a deliberate act.”

Police who searched the car found a Kalashnikov assault rife in the boot, along with knives and rounds of ammunition.

A gas canister has also been pictured at the scene of the crash in one of the French capital busiest areas.