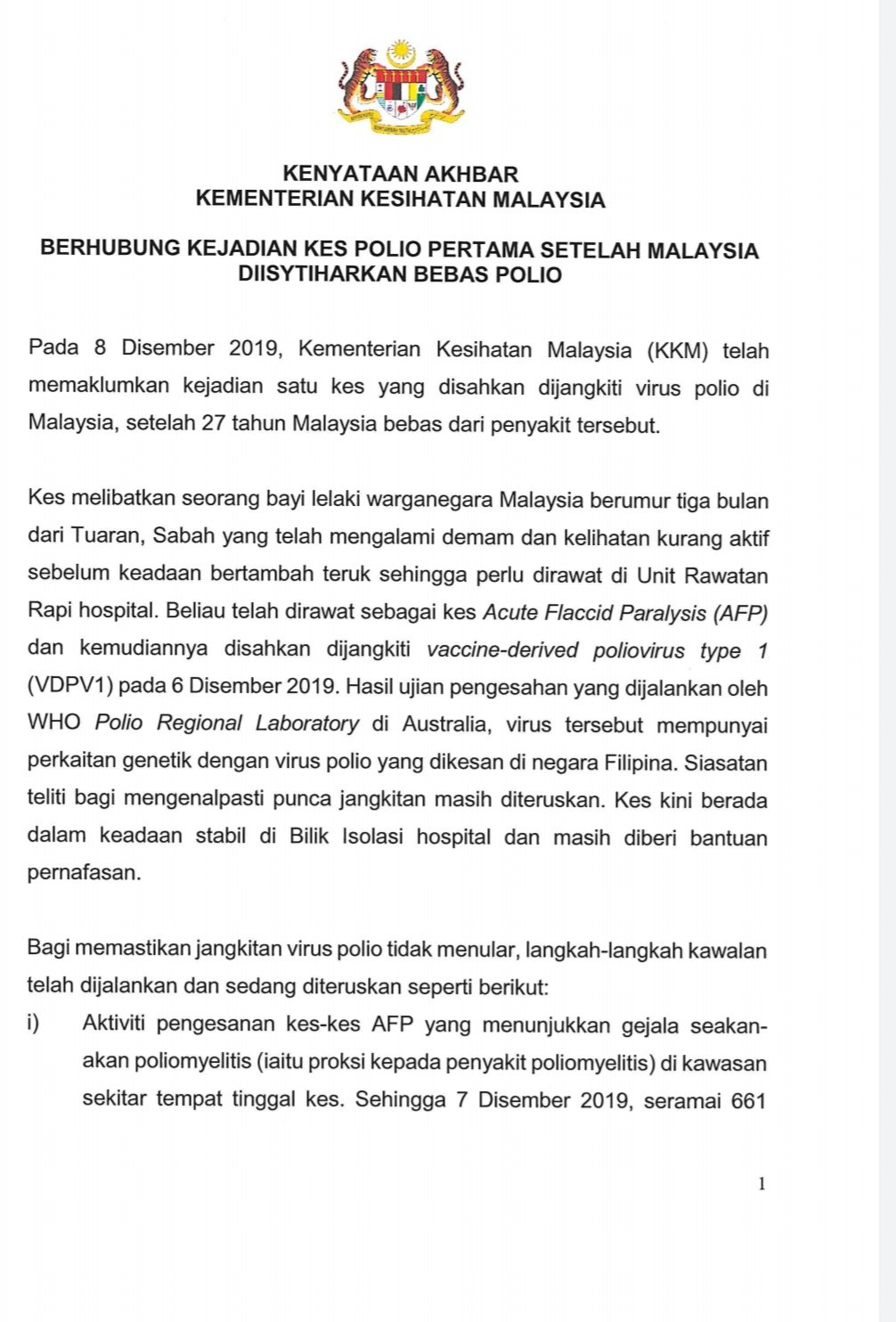 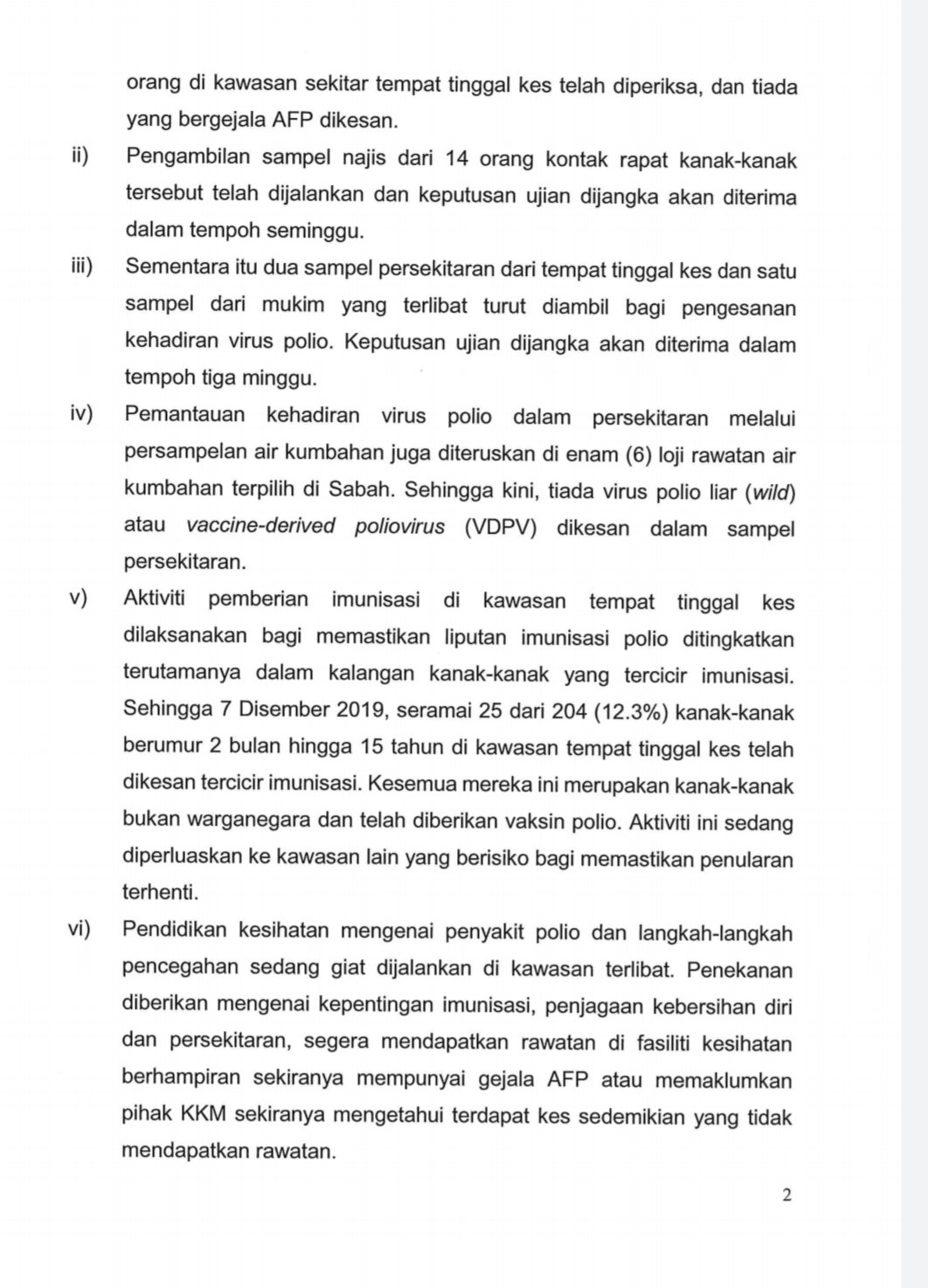 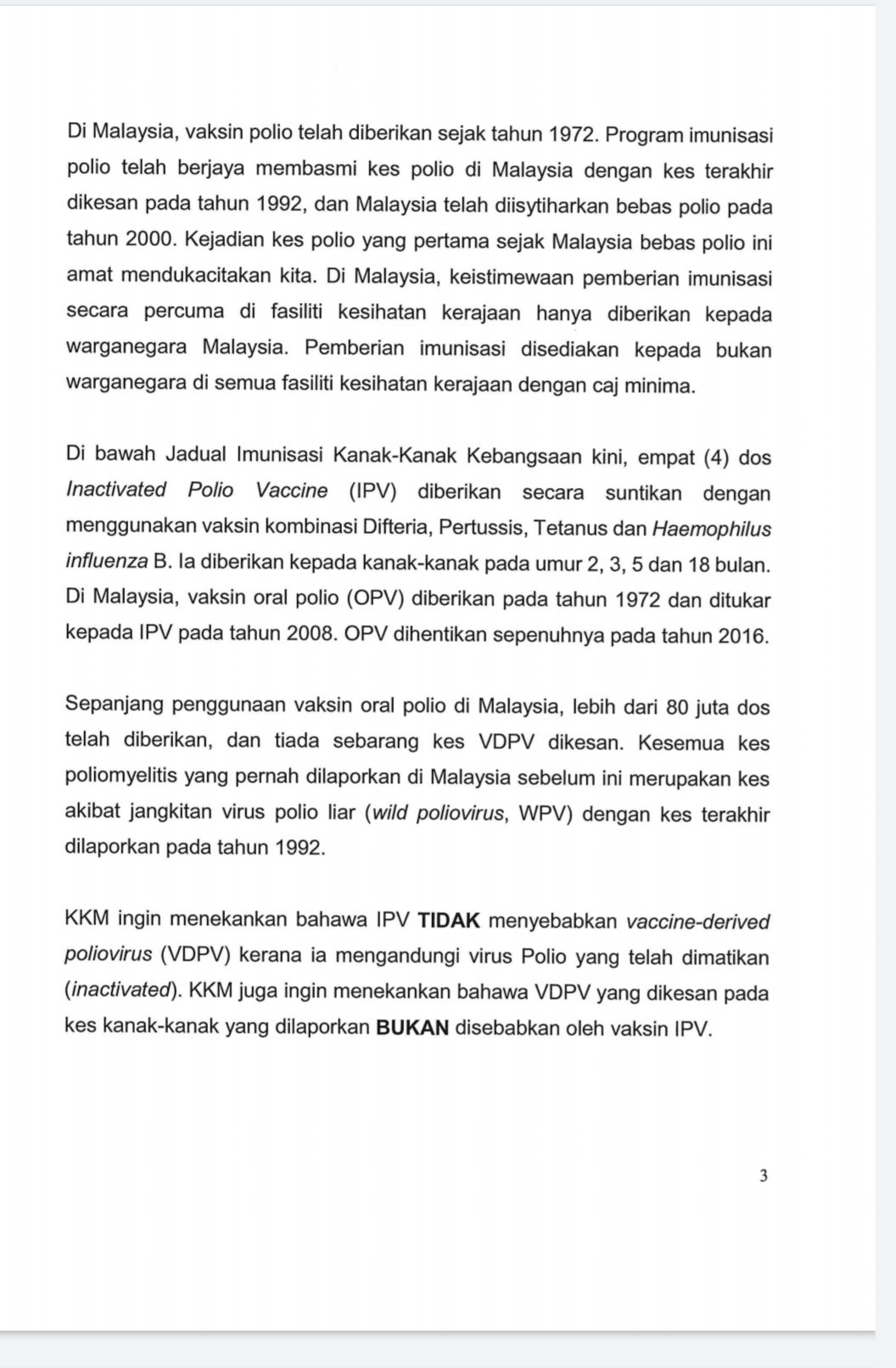 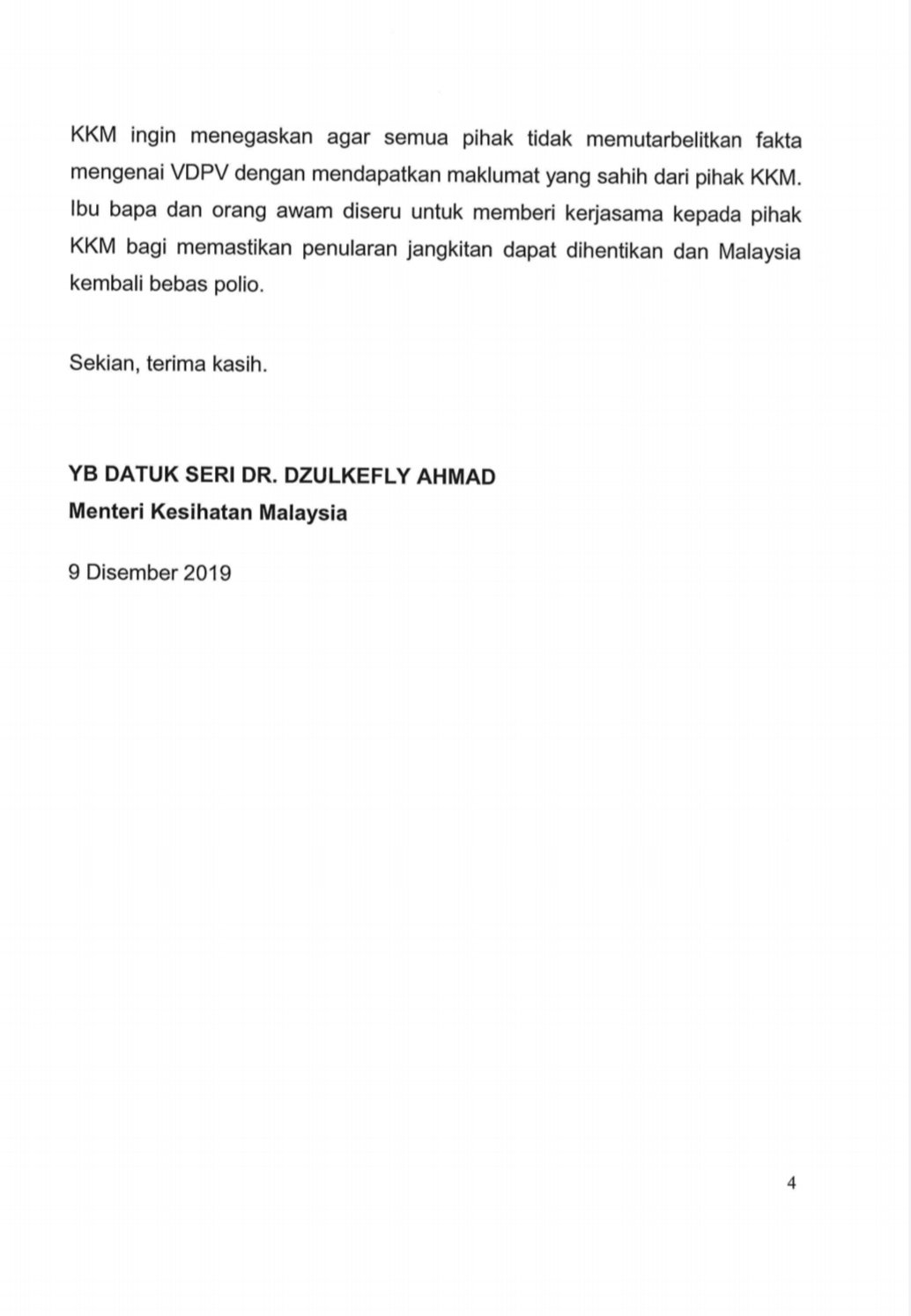 Malaysia’s first polio case in 27 years is a child who wasn’t vaccinated. Here are 3 things to know about the incurable virus Malaysia has reported its first polio case nearly three decades after the last occurence in 1992.

Last Friday (Dec 6), The Star reported the country’s Health Ministry confirming that a three-month-old boy from Tuaran, Sabah, has been infected with vaccine-derived poliovirus type 1 (VDPV1) after being admitted into a hospital’s intensive care unit.

The Star quoted health director-general Dr Noor Hisham Abdullah who said on Sunday (Dec 8): “The patient is currently undergoing treatment in an isolation ward and is in stable condition but needs respiratory support.”


​
He added that the poliovirus is classified as a circulating vaccine-derived poliovirus type 1 (VDPV1), which originates from a poliovirus that has been weakened by the orally-administered polio vaccine.


​
The Star reported that Dr Hisham said the weakened virus excretes from the body through faeces.

However, in unsanitary environments, the virus can infect others who have not been immunised against polio and will “thus spread in communities whose polio immunisation rates are less than 95 per cent”.

He warned that if the disease is left uncontrolled, it can genetically mutate until it once again becomes an active virus.

The New Straits Times reported that the Health Ministry will continue vaccination exercises in the area where this case was found, as well as other risk areas, to ensure that immunisation is above the rate of 95 per cent.

NST stated that Malaysia’s last polio case was in 1992, before the country was declared polio-free in 2000.

Here are three things you should know about the incurable disease:

Polio, or poliomyelitis, is a contagious disease mainly affects young children, and lives in an infected person’s throat and intestines.

It can invade an infected person’s brain and spinal cord, causing paralysis in serious cases – which can lead to permanent disability or death.

The Centers for Disease Control and Prevention (CDC) – an American public health institute – states that the virus enters the body through the mouth and spreads through contact with the faeces of an infected person.

Though less common, it can also spread through droplets from a sneeze or cough.

2) Symptoms range from flu-like to paresthesia and paralysis.

The institute noted that about one in four people with poliovirus infection will have flu-like symptoms, including: Sore throat; fever; fatigue; nausea; headache; and stomach pain.

CDC said these symptoms usually last two to five days, and “then go away on their own”.

A smaller proportion of people will develop more serious symptoms, like paresthesia (feeling pins and needles in the legs), meningitis (infection of the covering of the spinal cord and/or brain), and paralysis.

3) Vaccination is the most effective way of prevention
Although incurable, the disease can be prevented.

Polio vaccines, given multiple times, can protect a child for life, the World Health Organisation (WHO) says.

A 2019 article by HealthHub – a web portal by Singapore’s Ministry of Health (MOH) – says that two booster doses should be given to all children, with the first at 18 months of age, and the second at 11 years of age.

As for adults, CDC recommends a series of three doses, the first two separated by one to two months, and a third dose – six to twelve after the second. 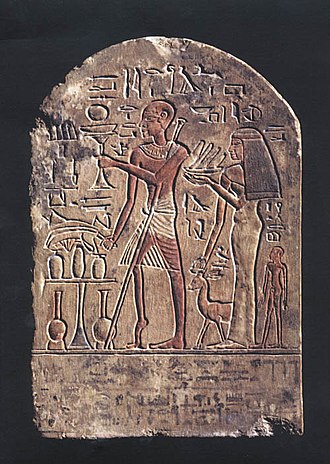 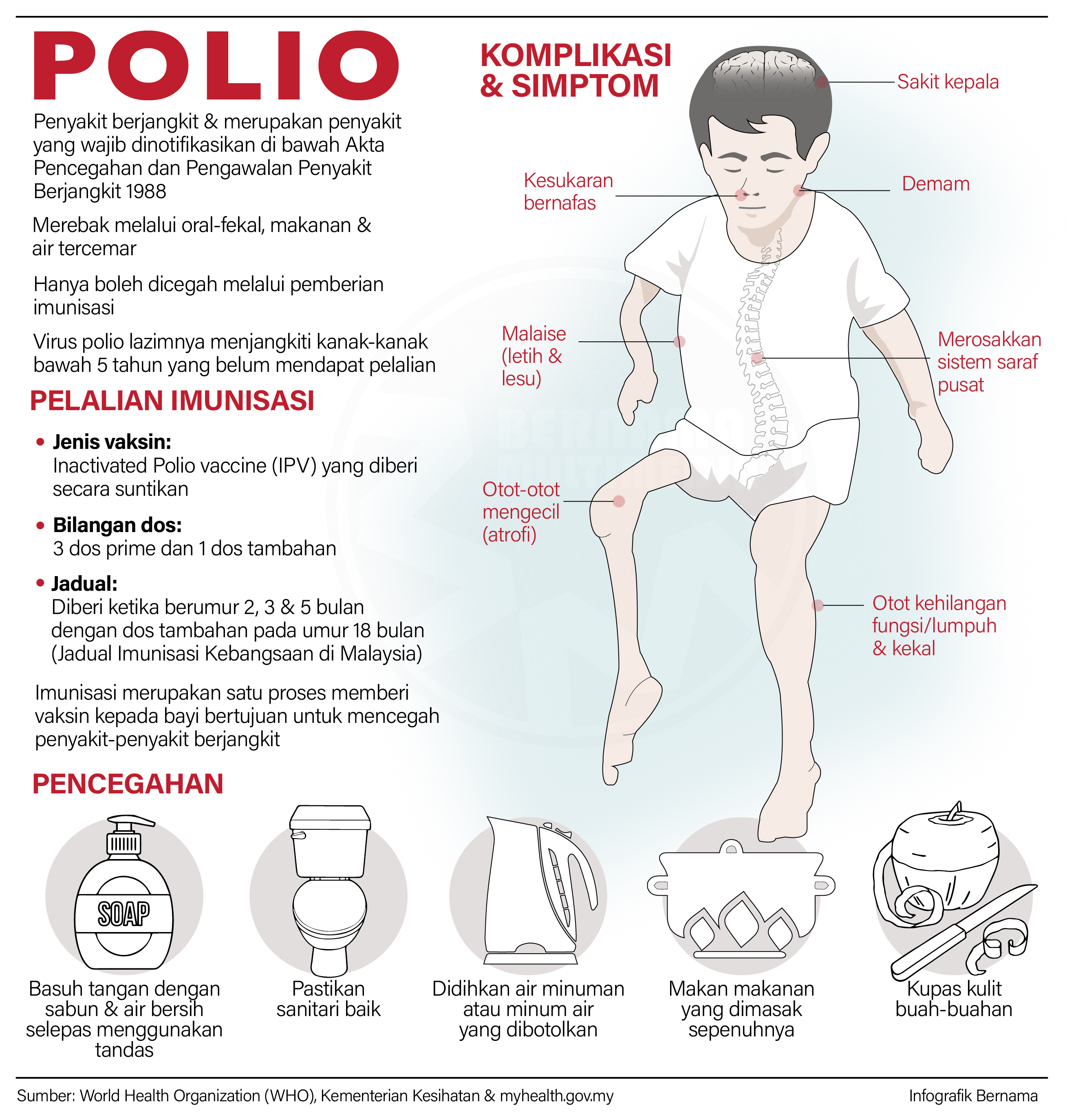