SEPANG: Malaysian-made products will be taking to the skies in a first between AirAsia and the Domestic Trade and Consumer Affairs Ministry.

“AirAsia will initially offer eight local food products on all its flights.

Besides, 550 local businesses will be able to expand their market by offering their products on AirAsia’s eCommerce platforms Ourshop and Rokki,” he said during the launch of the “Buy Malaysia Products” campaign here yesterday.

Saifuddin said that AirAsia also agreed to waive the listing fee of RM5,000 for the 550 businesses under the programme.

“This is the first such ever collaboration where the campaign to promote local products is heading skywards.

“Previously, we did it on the ground by requiring that at least 30% of products at hypermarkets and supermarkets be made locally,” Saifuddin said.

Speaking to reporters later, Fernandes said it was one of his goals to help local businesses.

“We wanted to help more Malaysians fly when we first started the company 17 years ago and have now flown over 100 million passengers.

“We believe we can now help Malaysian businesses by promoting their products through this effort,” he said.

Fernandes said the company was looking at developing its T&Co snack and beverages into a franchise soon.

He said the company also intended to promote its inflight menu Santan by opening a fast food restaurant in London. PETALING JAYA: AirAsia Group Bhd, which is disposing of 25 aircraft to US-based global private investment firm Castlelake LP, intends to use the proceeds of the sale to ramp up its digital business and reward shareholders.

“Selling our aircraft monetises all our aircraft at high prices and avoids residual risk and allows us to return cash to shareholders and invest in our new digital business,” he said via Twitter following the company’s EGM yesterday.

The proposed disposal is expected to reduce AirAsia’s gross gearing ratio from 0.53 times to 0.24 times.

Separately, Fernandes said the impact of the MFRS 16 accounting standard on AirAsia is “not very material.”

“Even with that standard and if you use profit and loss for analysis, the impact of the new standard MFRS 16 is about RM35mil a year,” he said via Twitter.

The MFRS 16 is a new accounting standard for leases that took effect this year.

CGSCIMB in a report earlier this month said the new accounting standard would result in higher gearing levels for AirAsia.

The research house noted that AirAsia had sold 79 aircraft to lessor BBAM Ltd Partnership in 2018 and is expected to sell a further 25 planes to lessor Castlelake LP by the third quarter of this year.

Together with the other existing operating lease aircraft, CGSCIMB said AirAsia is expected to capitalise RM11.8bil worth of borrowings related to the operating leases in 2019, effectively bringing back to the balance sheet what had previously been off-balance sheet.

“The overall impact to profit and loss earnings from the above sale and leasebacks is negative because AirAsia would have to pay for the lessors’ profit margin as well as provide for a higher level of maintenance charges based on lessors’ conditions for lease returns, which tend to be strict.

“The net result would be a squeeze on AirAsia’s profit margins.”

“Expansion plans are under way with 18 new aircraft for 2019. Available seat kilometres (ASK) is expected to grow at 9.8% and revenue passenger kilometres at 10.1% backed by load factors of 84.7%. Subdued fuel prices would help support earnings,” it said.

Maintain buy with an unchanged target price (TP) of RM3.40: AirAsia Group Bhd’s (AAGB) wholly-owned subsidiary AirAsia Investment Ltd together with Gumin Company Ltd and Hai Au Aviation Joint Stock Company have decided to terminate and release each other from all obligations under the transaction agreements of the proposed joint venture (JV) with effect from Wednesday. According to the initial plan, the formerly proposed new low-cost carrier in Vietnam was set to be launched in the third quarter of financial year 2019 (3QFY19).

While the cancellation of the JV may appear to negatively impact AAGB’s expansion plan, we do not think that this is the case. In early April, AAGB introduced Can Tho to its network of routes with a weekly frequency of four flights. In fact, this is the first-ever international flight to Can Tho, indicating AAGB’s lead as an international airline for that destination. Can Tho is AAGB’s sixth destination in Vietnam, while new services between Bangkok and Can Tho are set to be commenced in May. With 8.5 million visitors visiting the Mekong Delta in 2018, we opine that this destination has the potential to attract more visitors which will positively flow into AAGB’s load factor. Therefore, it is not imperative for AAGB to set up a JV carrier in Vietnam.

We maintain our FY19 and FY20 earnings estimates for AAGB as we did not impute any impact from the formerly proposed JV into our estimates. Moreover, AAGB did not make any financial commitments to the JV which would have cost RM58.2 million, representing a 30% stake in Hai Au Aviation Joint Stock Company.

Based on our previous analysis of Malaysia Airports Holdings Bhd (buy; TP: RM8.90) in our report on Monday, we opine that the proposed international departure levy will not have much impact on passenger growth. — MIDF Research, April 18 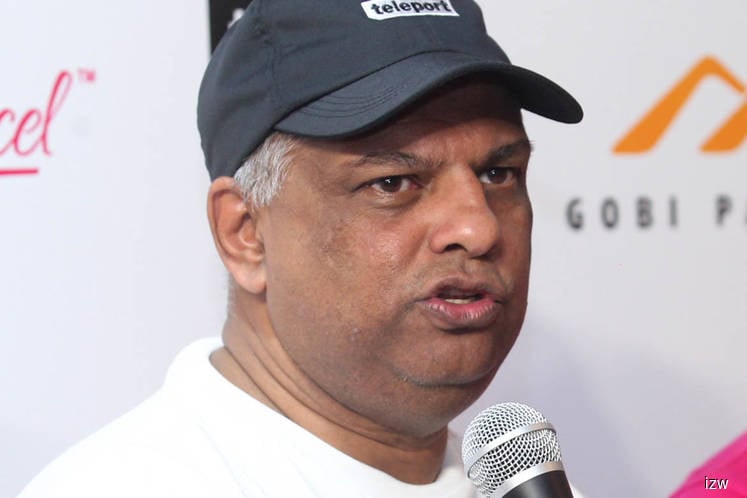 KUALA LUMPUR (Nov 22): AirAsia Group Bhd chief executive officer and co-founder Tan Sri Tony Fernandes is eyeing to set up an airline in China in the longer term, according to Nikkei Asian Review.

In a report yesterday, Fernandes was quoted as saying that he views China as a foreign investment-friendly economy.

He said the market was already critical for AirAsia, with the group recording almost 20% of its annual sales from Chinese destinations.

"We have to make sure that we can be relevant in such a huge market," said Fernandes.

The news portal also revealed Fernandes was planning to launch an AirAsia Group affiliate in Cambodia, followed by China and Myanmar.

"I like Cambodia, China and Myanmar," Fernandes was quoted as saying in an interview.

After a third attempt to establish a Vietnam affiliate failed earlier this year, Fernandes said he had switched focus to other parts of the region.

"I don't have any plans in Vietnam for now after trying three times.

"We cannot find the right partner and now I think there are too many airlines there. ... Our time will come," he said.

Cambodian law does not restrict foreign ownership in the local airline industry, but new carriers are required to invest up to US$30 million in the country during the first three years, excluding aircraft.

The country's growing popularity as a tourist destination has already attracted several China-backed carriers, with six scheduled airlines now in the mix.

AirAsia Group currently has listed affiliate airlines in Indonesia and Thailand, with plans for a Philippine affiliate to go public next year.

"Sometimes it's easy to get a reliable partner but we must then make sure that the airport can take our growth and whether we can deliver a unique proposition to the market," Fernandes said.

"It's not always about the licence," he added.

In the longer term, his vision includes transforming AirAsia's online ticketing platform into a travel marketplace that would make the company the "Amazon of travel".

The first step along that path was to allow travellers to buy tickets on rival carriers through AirAsia.com.

Fernandes remains adamant that the new platform, powered by US online travel agency Kiwi.com, will not cannibalize AirAsia ticket sales.

"Even now, no one comes on AirAsia.com to straightaway purchase air tickets," Fernandes said. "They will definitely do some fare comparisons on some sites, and now I'm telling these people to do the comparison on our platform."

The next step will be to make hotel bookings and activities available on the same platform. Fernandes also intends to set up a separate Muslim-friendly online platform to tap into the vast global market for halal and Shariah-compliant tourism, Nikkei Asian Review reported.

It said the portal, to be known as "Ikhlas" — the Malay word for sincerity, will be launched "soon" and will include halal tours, hotels and restaurants worldwide.