BTC USD 37,950.2 Gold USD 1,774.15
Time now: Jun 1, 12:00 AM
Menu
Log in
Register
Navigation
Install the app
More options
Lights off
Contact us
Close Menu
You are using an out of date browser. It may not display this or other websites correctly.
You should upgrade or use an alternative browser.

Thailand’s capital is sinking — and sinking fast. However, unlike other cities on our list, a shoddy foundation isn’t necessarily to blame. Resting on the Chao Phraya River — which flows into the Bay of Bangkok about 30 miles south of the city center — this colossal settlement is more likely to drown than sink. Experts now say that this mouthwatering foodie destination — along with the dozens of beautiful temples found here — may be under water in as little as seven years.

According to Thai scientist Dr. Ajong Chumsai na Ayudhya, the fate of Bangkok can best be explained by global warming. Asia News Network reports that “Ajong said humans were mainly to blame for such disasters because they were using up natural resources, chopping down forests and kept emitting greenhouse gases with no regard for the future.” Ajong also says that changes in the earth’s overall climate will lead to more severe tsunamis in the Gulf of Thailand that will have extremely negative effects on the southern portion of the country. With less than a decade to spare, time might be running out for a trip to Thailand’s most popular tourist getaway. 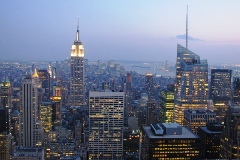 If you’ve never seen the Statue of Liberty or been dazzled by the lights of Times Square, now’s the time. Much like its Thai comrade, America’s most densely populated city is doomed to suffer the effects of global warming. Sitting at the mouth of the Hudson River where it flows into the Atlantic Ocean, this concrete jungle will soon be at a much higher risk of damage from rising sea levels and imposing tropical storms. And unlike the ones bobbing around in a barrel on Halloween, this Big Apple will not float.

Science Daily reports that the sea levels in the New York City area are expected to rise about twice as quickly as sea levels around the world, meaning that Gotham will take the plunge well before the rest of the United States. However, Science Daily says that flooding is just one of the symptoms New York will suffer: “The submersion of low-lying land, erosion of beaches, conversion of wetlands to open water and increase in the salinity of estuaries all can affect ecosystems and damage existing coastal development.” Not only will the Empire City be transformed into a wading pool, but it will slowly be washed out to sea. 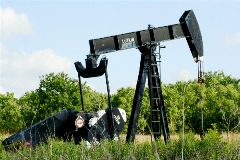 Houston, we really do have a problem — soon, NASA’s Visitor’s Center won’t only be stuck on Earth, but in it as well. The city that Fodor’s deems is arguably Texas’ most cosmopolitan is struggling to stay above ground. Built on a gold mine of natural resources and the determination to flourish, Space City has become a major energy hub and the taking-off point for U.S. space exploration. However, America’s fourth-largest city was built on a foundation of sand. Literally.

Houston sits on the loosely packed banks of four major bayous that empty into the Gulf of Mexico. For years, residents of Houston relied on groundwater to fulfill their needs, but the mass amounts of extraction needed to supply the ever-expanding city weakened Houston’s foothold. Oil extraction was also damaging to the foundation, as was continuous sprawl, not to mention the 300 or so active fault lines that run beneath Houston’s streets and skyscrapers. Now, many parts of this metropolis — specifically Jersey Village to the northwest — are sinking by as much as two inches per year, according to Science Daily. Experts note that while sinking has slowed significantly in areas that have stopped extracting ground water, a permanent solution to Houston’s problem has yet to be found. If Houston is on your list of cities to see, you best prepare soon for take-off. 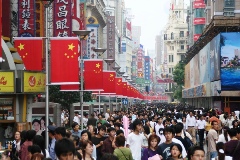 Things aren’t looking good for Shanghai, either. Located on China’s coast, this sprawling city was built on swamplands surrounding the mouth of the Yangze River. Originally a small fishing village, Shanghai began to draw more and more residents in the mid-19th century. Modest homes were replaced by breathtaking skyscrapers (not to mention some of the best shopping venues in Asia), and Shanghai soon became the most densely populated city in the world, housing over 20 million people by 2001. The city was handling rapid expansion just fine until the early 20th century, when wells became a major source of water and the underlying sediment deposit was disturbed. According to PBS, Shanghai sank roughly eight feet between 1921 and 1965, which equals about two inches per year. The city still continues to drop at a rate of about half an inch per year.

According to experts, not much can be done to keep Shanghai above ground — the city is simply too heavy for its foundation. However, in an effort to slow the sinking process, all new high-rise buildings must be built with deep concrete piles to help support their weight. If you have any interest in seeing the architecture for which Shanghai is both famous and floundering, don’t wait too long. 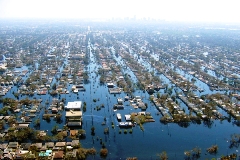 When colonists chose New Orleans as the capital of French Louisiana, they did so because of its inland locale. However, any land protection the city had has been washed away, making America’s favorite place to celebrate (approximately half of which sits at or below sea level) even more prone to tropical storms.

It wasn’t until after Hurricane Katrina that experts really took note of New Orleans’ downhill situation. In 2006, National Geographic reported that the city sank about a quarter of an inch per year in the years leading up to Hurricane Katrina, while the levees designed to protect the city from the Gulf sank at four or five times that rate, exacerbating the long-term effects of the storm. Experts say that not much can be done to save the Big Easy. According to a report issued in 2009 by the National Academy of Engineering and the National Research Council, “Levees and floodwalls surrounding New Orleans … cannot provide absolute protection against overtopping or failure in extreme events. … If relocation is not feasible, an alternative would be to elevate the first floor of buildings to at least the 100-year flood level.” Just goes to show that there’s never a time like the present to don your Mardi Gras mask and head south to Bourbon Street. 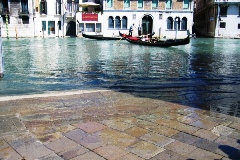 It’s been several hundred years since the Venetians decided to construct the towering St. Mark’s Basilica and sprawling Piazza San Marco atop submerged wooden planks and forgo roads in favor of canals. Back in the day, the city’s geography made sense: Direct access to the sea was necessary in order for Venitians to maintain control of commerce on the Mediterranean Sea. But the dig for fresh water proved to have a negative impact on this fish-shaped city: According to The Christian Science Monitor, Venice has sunk almost a foot over the past 100 years. To make things worse, water levels in the Mediterranean Sea are also rising. Although acqua alta (high water) has plagued this ornate tourist hotspot for centuries, flooding frequency has increased dramatically in recent years. Justin Demetri of LifeInItaly.com notes that Venice now experiences over 60 bouts of acqua alta each year.

Preserving Venice has been a priority of the Italian Government for about 30 years. Several billion euros have been dedicated to a flood defense system, the MOSE Project, which is expected to be completed in 2011 or 2012. However, some experts claim that the only way to save the city is to move it altogether. Either way, if you’ve always dreamed of a gondola ride through the Bride of the Sea, you had better do so soon with galoshes in tow.

Resting on a fickle lake bed in the Valley of Mexico, Mexico City has been facing the possibility of going under for centuries. However, according to geologists, there are parts of this massive metropolis that are sinking by as much as eight inches per year. Because of a lack of sufficient drainage, the city was heavily prone to flooding from groundwater flowing down from the surrounding mountains, leading to the construction of a vast underground drainage system. But over-extraction of groundwater from the Texcoco lake bed during the 20th century has caused the city’s clay foundation to crumble, forcing the metropolis to sink deeper into the ground. And as the city sinks, so does the drainage system, forcing waste water to reverse its course and head back into the city. According to AZCentral.com, Mexico City’s drainage capacity has decreased by 30 percent since 1975.

There are several projects underway to keep this sinking city afloat, including a 23-foot-wide ($1.1 billion) Eastern Drainage Tunnel that will deposit waste water about 40 miles north of the city. The tunnel should be completed by 2012. Work is also being done to help save the architectural gems — like the popular Metropolitan Cathedral — found in the Historic District, which are one of the city’s major tourist draws. But despite best efforts, engineers say that there is no way to keep Mexico City from sinking.
Last edited: Dec 1, 2010