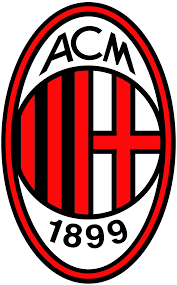 Associazione Calcio Milan, commonly referred to as A.C. Milan or simply Milan (Italian pronunciation: [ˈmiːlan]), is a professional Italian football club based in Milan, Lombardy. It was founded in 1899 by English lace-maker Herbert Kilpin and man Alfred Edwards among others. The club has spent most of its history in Serie A, the top-flight of Italian football, having played only two seasons in Serie B in the early 1980s

Milan has won 18 officially recognized UEFA and FIFA international titles, and remains tied with Boca Juniors as having won the most in the world. Milan has won four world titles, more than any other club in the world, having won the Intercontinental Cup three times and the FIFA Club World Cup once. Milan has won the European Cup/Champions League on seven occasions; only Real Madrid has exceeded this total. The club has also won the UEFA Super Cup a record five times and the Cup Winners' Cup twice

Domestically, Milan has won 18 league titles, making the club the second most successful in Serie A with their local rivals Internazionale and record-holder Juventus (27 titles). The club has also won the Coppa Italia five times, in addition to five Supercoppa Italiana triumphs. The Europa League remains the only major competition for which the team are eligible to compete that they have never won: in this competition they have lost two semifinals, in 1972 and in 2002. Milan was a founding member of the G-14 group and the European Club Association that was formed following the first organization's dissolution

Milan's home are played at San Siro, also known as the Stadio Giuseppe Meazza. The stadium, which is shared with Inter, is the largest in Italian football, with a total capacity of 80,074. The owner of the club is Italian Prime Minister, Silvio Berlusconi while the vice-president is Adriano Galliani. Milan is one of the wealthiest clubs in Italian and world football​
Click to expand...

Red and black are the colours which have represented the club throughout its entire history. They were chosen to represent the players' fiery ardor (red) and the opponents' fear to challenge the team (black). Rossoneri, the team's widely used nickname, literally means "the red & blacks" in Italian, in reference to the colours of the stripes on its jersey

Another nickname derived from the club's colours is the Devil. An image of a red devil was used as Milan's logo at one point with a Golden Star for Sport Excellence located next to it. As is customary in Italian football, the star above the logo was awarded to the club after winning 10 league titles, in 1979. For many years, Milan's badge was simply the Flag of Milan, which was originally the flag of Saint Ambrose. The modern badge used today represents the club colours and the flag of the Comune di Milano, with the acronym ACM at the top and the foundation year (1899) at the bottom

White shorts and black socks are usually worn as part of the home strip. Milan's away strip has always been completely white. It is considered by both the fans and the club to be a lucky strip in Champions League finals, due to the fact that Milan has won six finals out of eight in an all white strip (losing only to Ajax in 1995 and Liverpool in 2005), and only won one out of three in the home strip. The third strip, which is rarely used, changes yearly, being mostly black with red trimmings in recent seasons.​
Click to expand... 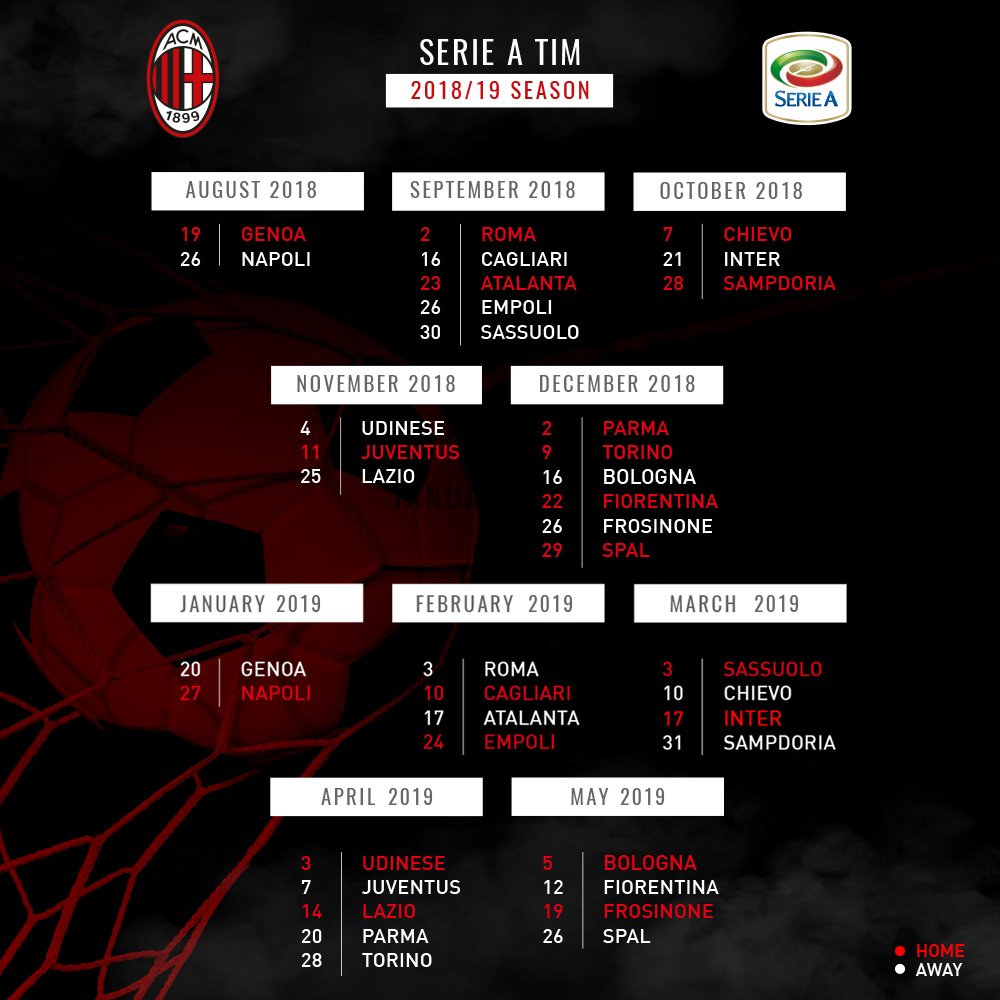 Our fixture list for #SerieATIM 2018/19 has been revealed. Here is the schedule in full!

The Greatest Rossoneri Ever

Wesley Sneijder turned out and scored for Inter Milan in the Italian Supercoppa, but was unable to prevent them losing out to old foes AC Milan 2-1 in Beijing.

With reports on Saturday morning suggesting the Holland playmaker was set to join Manchester City, making the tussle for his services a two-way one with Manchester United, Sneijder was always going to be the main attraction and did not disappoint as he scored a wonderful first-half free-kick.

But the goal would not prove to be the winner, as Zlatan Ibrahimovic equalised against his former club, before Kevin-Prince Boateng scored the winner with 22 minutes left.

Sneijder was in the thick of the action from the off, hitting wide after a one-two with Samuel Eto'o, while Robinho was off target at the other end.

Inter looked the livelier of the sides, with Dejan Stankovic going close and, in the 21st minute, their pressure told when Sneijder curled home a 25-yard free-kick.

Eto'o worked Christian Abbitati at his near post as Inter looked for a second, while Ibrahimovic nearly levelled when he hit the post with a header.

Milan stepped up the pace in the second half and were able to score on the hour, with Clarence Seedorf forcing his way into the box and Ibrahimovic perfectly poised to convert.

With Inter rocking, Milan took full advantage and took the lead when, after Alexandre Pato's effort had been tipped on to the post by Julio Cesar, Boateng was on hand to convert from close range.